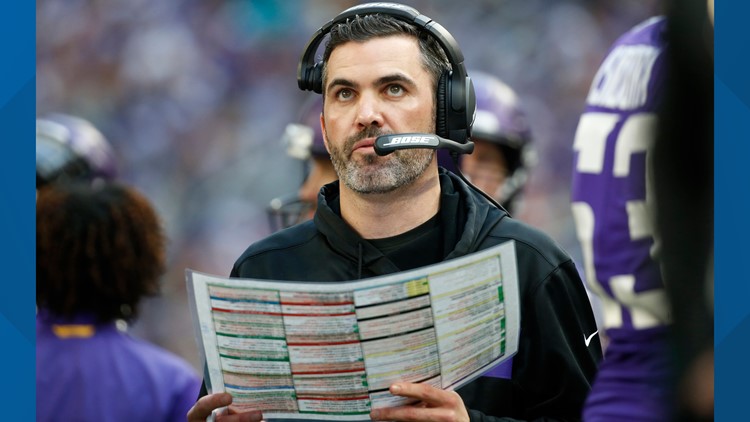 Photo by: AP
FILE - In this Sunday, Dec. 16, 2018, file photo, Minnesota Vikings interim offensive coordinator Kevin Stefanski watches from the sideline during the first half of an NFL football game against the Miami Dolphins in Minneapolis. With the Carolina Panthers and New York Giants completing coaching hires on Tuesday, Jan. 7, 2020, the Cleveland Browns job vacancy will be the last NFL opening filled. It's still unclear how quickly that will happen. The Browns, who fired Freddie Kitchens after just one season, are in the second week of interviews and have scheduled meetings this week with Patriots offensive coordinator Josh McDaniels and Vikings coordinator Kevin Stefanski. (AP Photo/Bruce Kluckhohn, File)

CLEVELAND — The top headlines for 3News on Monday include the full list of Oscar nominations, details about the reported hiring of Cleveland Browns new head coach, Kevin Stefanski, and what luxury living will cost you in the city of Cleveland.

The nominations for the Academy Awards were announced on Monday morning in Los Angeles by John Cho and Issa Rae, leaving people talking about how yet again no women were nominated in the category of best director, for the 87th time in awards show’s 92-year history.

Back to those who were nominated, Todd Phillips' "Joker" leads the pack with 11 nominations, including Best Picture. "The Irishman," "1917" and "Once Upon a Time...In Hollywood" weren't far behind with ten nominations each.

The Oscars will go on without a host for the second year in a row, airing on ABC on February 9.

Over the weekend, the Browns reportedly finally pulled the trigger on hiring a new head coach, going with Minnesota Vikings offensive coordinator Stefanski.

Despite Stefanski’s track record of success during his 13 years in Minnesota, including six playoff appearances with two appearances in the NFC Championship Game, it’s reported he had to make major concessions to land the job.

According to a report from 92.3 The Fan afternoon drive co-host Dustin Fox, that structure includes heavy involvement in game plans from owner Jimmy Haslam and the analytics team, headed up by chief strategy officer Paul DePodesta.

“Was also told candidates also had to agree to turn in game plans to the owner and analytics department on Friday and to attend an end-of-week analytics meeting to discuss their plan,” Fox tweeted on Sunday night.

With Stefanski on staff, the Vikings won 10 or more games six times, including the second-best finish in franchise history. The 2017 Vikings posted a 13-3 record, which ranks second only to the 15-1 mark set in 1998.

When it was reported on Sunday that the Cleveland Browns intended to hire Stefanski as their next head coach, the overwhelming opinion on social media was that DePodesta got the man for the job he wanted all along.

With DePodesta seemingly becoming a more integral part of the Browns long-term strategy, maybe that means he’ll be relocating to the Buckeye State.

If so, he might be interested to know exactly what you can get for your money if you’re looking to live in Cleveland.

After scanning local listings in Cleveland via rental websites Zumper and Apartment Guide, the city's most lavish listings come in at around $3,500 per month, with other luxurious place available in the $1,700 range (in Ohio City and University District).

In the middle of that, in Edgewater you can snag a one bedroom, two-bathroom condo measuring 1,953 square feet for a list price of $2,750 per month.

RELATED: Cleveland apartments fit for the rich and famous