Toledo native with a criminal record goes on to find success, earns PhD

Victor Coleman had a long criminal record, but after getting inspired by his children to change his life, he went on to find success. 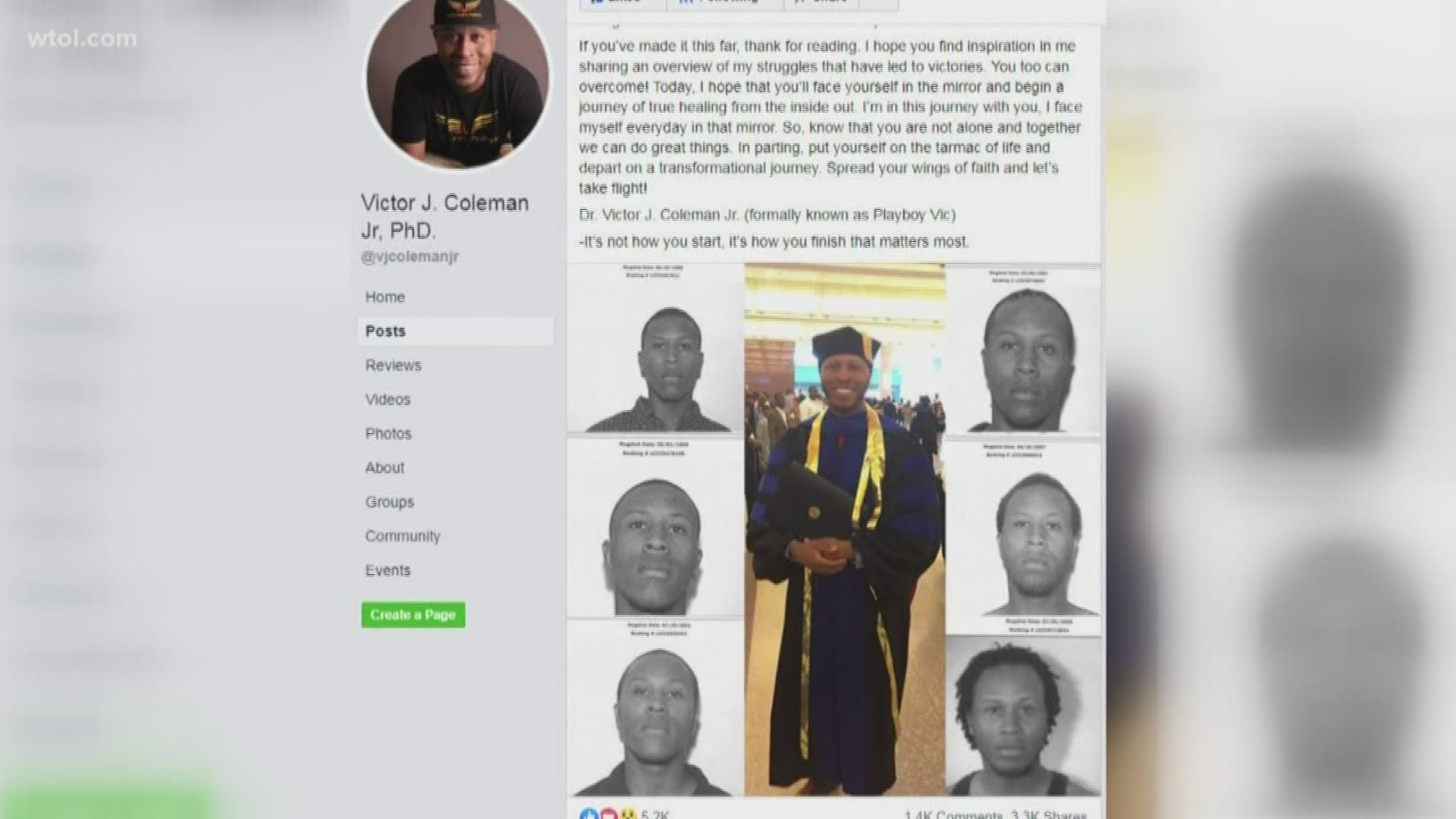 TOLEDO, Ohio — You've probably heard the saying, “It's now how you start that's important, but how well you finish.”

For a west Toledo resident, it describes his life up to this point.

"Honestly, I had given up on myself based on what I thought society thought of me. Sometimes, we are our own worst enemy and I became my worst enemy," Victor Coleman said.

He grew up on Ayers Avenue in west Toledo.

“Growing up, I was a troubled youth and I wasn’t satisfied with the life that I was living,” Coleman said. “And I found a way to act out to show my hurt, my anger or my pain. So, I would get in trouble, was arrested for vandalism - and things like that led to fighting and disruptive behavior.”

The first time he was arrested was in the first grade. It was the first of several arrests. His mom, Crystal, was doing the best she could — a working single mom, raising five children.

"I thank God that my mother — she never gave up on me,” Coleman said. “She always came through. She would come pick me up every time. And you get that silent ride home, but you knew what that silent ride meant. "

A mother that never gave up. But it were his own children that inspired him to make a change.

"It wasn't until I tapped into my children and saw that they believed in me - and it was them believing in me - that pushed me to go back to school," he said.

The home Coleman grew up in now sits abandoned. It was time for him to abandon his past of run-ins with the police and make a brighter future.

“It wasn't until the day I looked in the mirror and stopped blaming everyone else and took ownership that change really started to happen in my life,” Coleman said.

But it wasn't easy.

“When I made my mind to give up and I called home to speak to my children, when I spoke to my 12-year-old at that time, right before we hung up the phone, he said, ‘I’ll talk to you later Future Dr. Coleman.’ And it was at that moment that I began to cry and realized that if I gave up, then I was giving permission for him to give up on anything he had done.”

Coleman didn't give up.

“I just remember I heard the spirit tell me, ‘Go for a PhD’ and even when I enrolled, I didn't enroll for a PhD, I enrolled for a doctorate. And the spirit told me, ‘that's not what I told you to do. You're cheating yourself. Go for a PhD.' It was the day before classes started that I switched into a PhD.”

He then made his dreams come true.

“I'm probably still pretty speechless because we just got back from the graduation and all,” Coleman’s mom, Rowlett, said. “The magnitude of pride is unbelievable.”

Coleman shared his story on Facebook and is shocked with the response.

Victor J. Coleman Jr, PhD.
G'morning, with every sunrise comes a new opportunity to live, laugh... and love. Today, don't let the opportunity pass to let someone know you love them. Better yet, don't let the moment pass and not show them. Communication is key both verbal and no verbal.

“It wasn't until that post, that I opened up and shared the dark side of that post publicly,” he said.

He faced that dark side head on when he requested his mugshots.

“I opened it and the moment that I opened it, I began to cry, because I could see the pain,” he said. “There was a boy inside of the man that was fighting to get out and it hurt to see where I was, versus where I am.”

“My message is to, as I say, is to heal the hood. I want to heal those who are hurting - the little boys, the little girls who have pain that they're trying to hide inside of a grown body. We have to heal that so we can all grow,” Coleman said.