Memes online claim that Pepsi and Apple gave millions to the social justice group. Here's what we learned. 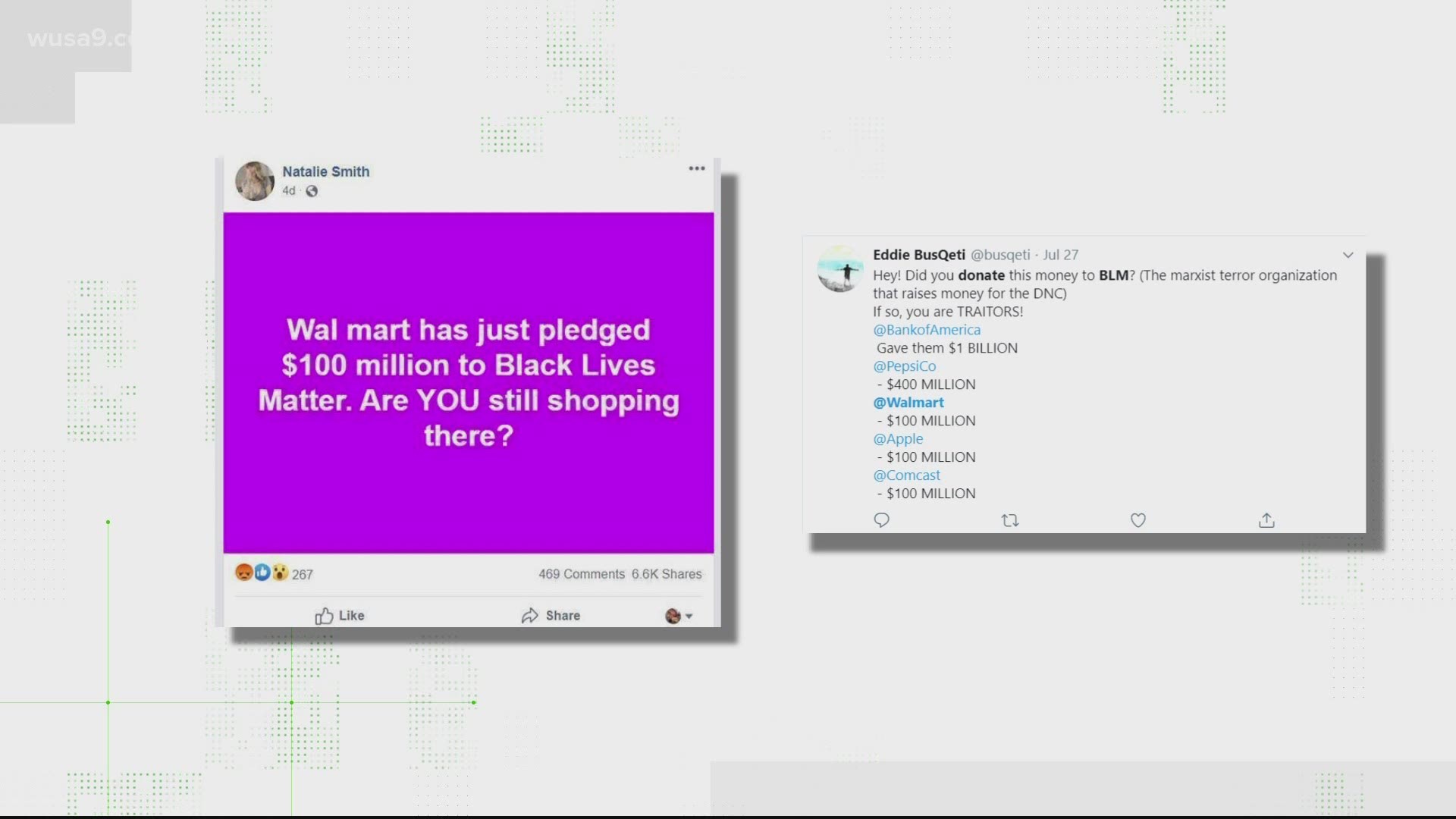 WASHINGTON — Several American companies have made a push towards fighting social injustice through donations.

But online, it appears numerous social media accounts claim they gave millions of dollars to the Black Lives Matter organization.

Did major U.S. companies like Walmart and Apple donate to Black Lives Matter?

We can verify the claim that America’s biggest companies pledged to donate millions to the Black Lives Matter organization is FALSE.

They all announced plans to either use the money internally or start an initiative to advance racial justice, but there’s no evidence they pledged money directly to Black Lives Matter.

We went to Walmart, Apple, Pepsi, and Bank of America company websites and viewed their statements on social injustice.

The companies made donations, but not specifically to the organization known as Black Lives Matter.

On June 2, Bank of America put out an announcement that the bank would donate $1 billion over four years. The money will focus on equity in health, jobs, small business, and housing for minority communities.

Bank of America Announces $1 Billion/4-Year Commitment to Support Economic Opportunity Initiatives
Bank of America announced today that it is making a $1 billion, four-year commitment of additional support to help local communities address economic and racial inequality accelerated by a global pandemic. The programs will be focused on assisting people and communities of color that have experienced a greater impact from the health crisis.

Pepsi claims to have set aside $400 million for initiatives to lift up black communities and increased black representation at PepsiCo. Again, no mention of Black Lives Matter.

PepsiCo's Racial Equality Journey
Our journey will now focus on three pillars- People, Business, and Communities. When it comes to People, we are focusing on increasing representation; recruitment; and education, internships and apprenticeships.

The unfinished work of racial justice and equality call us all to account. Things must change, and Apple's committed to being a force for that change. Today, I'm proud to announce Apple’s Racial Equity and Justice Initiative, with a $100 million commitment. pic.twitter.com/AoYafq2xlp

“We are announcing a new entrepreneurial camp for black developers with a goal of fostering and lifting up the brightest lights and best ideas of the family,” Cook said online.

We read through all the statements and watched the video statements. Donations to the Black Lives Matter organization are never mentioned.