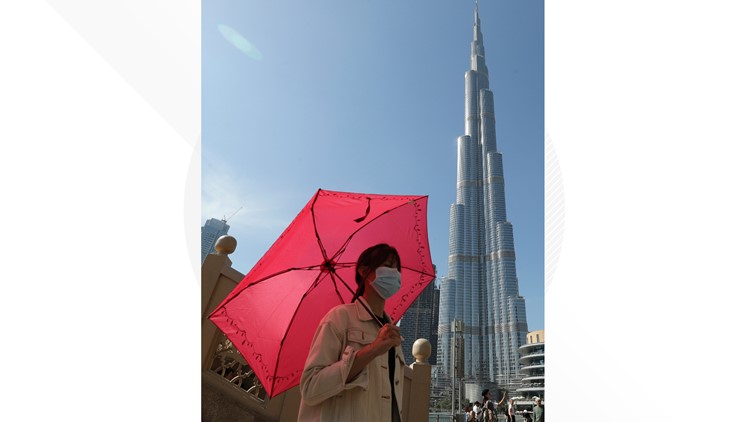 Photo by: AP
In this Thursday, Jan. 30, 2020, photo, a Chinese woman wearing a protective face mask walks under the world's tallest tower, Burj Khalifa, in Dubai, United Arab Emirates. The World Health Organization declared the outbreak sparked by a new virus in China that has been exported to more than a dozen countries as a global emergency Thursday after the number of cases spiked tenfold in a week. (AP Photo/Kamran Jebreili)

VERIFY: Did the tallest building in the world light up for Wuhan?

A video on Twitter purports that the surface of the world’s tallest building, the Burj Khalifa in Dubai, put on a light show in support of China amidst the coronavirus outbreak.

Such an impressive light show can be difficult to believe. Is it possible that the video was edited?

Is this a real light show on the Burj Khalifa, and was it lit up in support of China amidst the coronavirus outbreak?

Yes. The Burj Khalifa put on the show in support of Wuhan, specifically.

The show of support for Wuhan was done on Feb. 2. The building lit up exactly in the way the video depicts.

Back in 2016, the Burj Khalifa posted a video of how the LED facade was put together. That video says the Burj Khalifa has the Guinness World Record for the largest and highest LED screen on the planet.

That video said the screen required 72 kilometers of cabling and 10,000 connectors to cover a total area of 33,000 square meters. That’s equivalent to a screen that’s larger than 355,000 square feet.

One usage of the building’s LED screen is advertising. A single three minute ad on the Burj Khalifa could cost more than $68,000.