VERIFY: Do airlines ban passengers who refuse to wear masks on board?

Some airlines have a no-fly list for passengers who won't follow COVID protocols on board the aircraft. 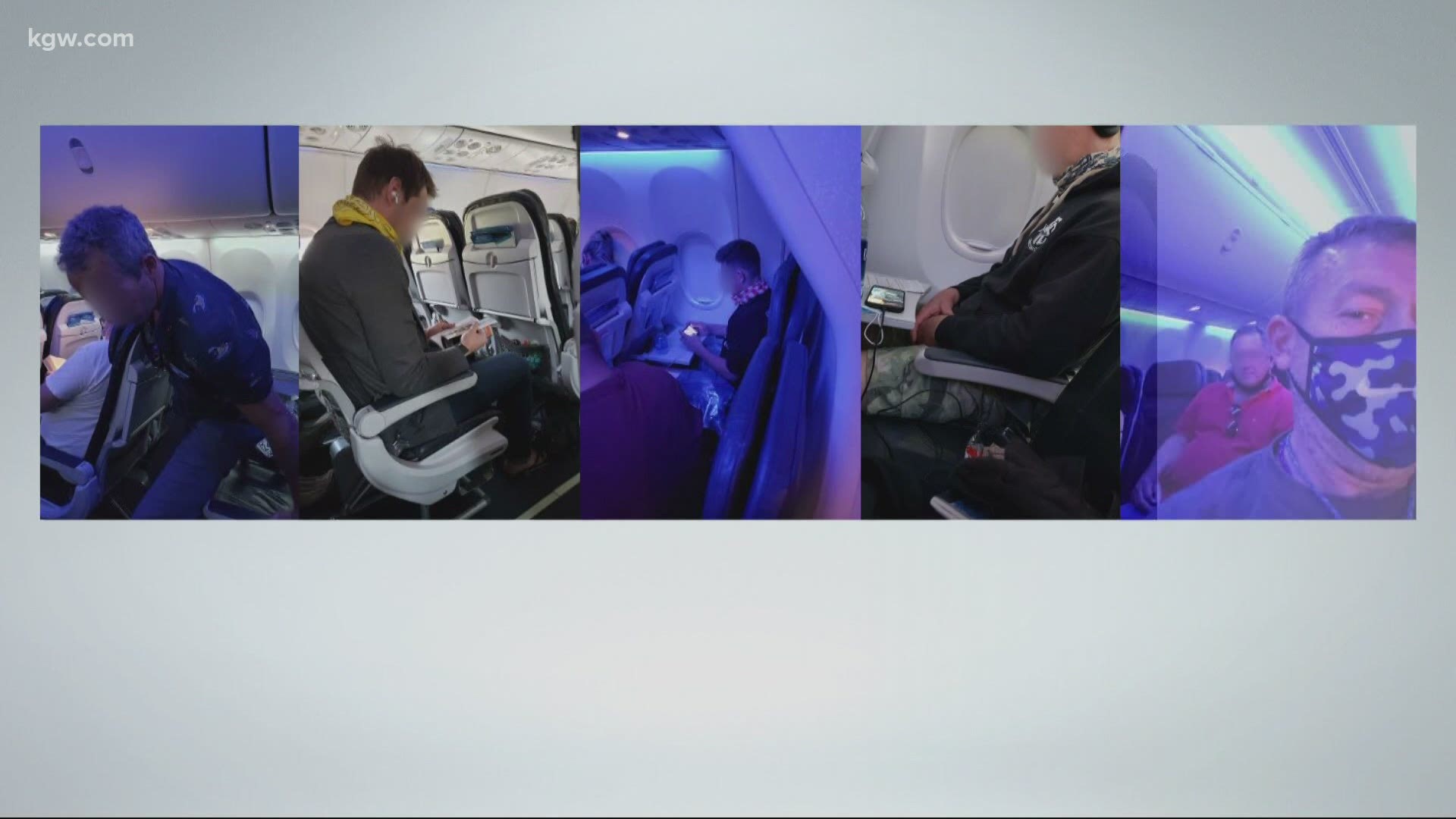 PORTLAND, Oregon — With the upcoming holiday season there is a huge increase in air travel, despite the Centers for Disease Control and Prevention recommending against traveling this year.

Based on pictures on social media, and reports from the TSA, more people are flying for Thanksgiving week compared to any other time during the pandemic.

COVID-19 cases continue to rise in some states, including Oregon, and flight-based travel poses risks for spreading infection. Airlines are taking measures such as mask mandates to safeguard passengers from those risks while traveling.

As Thanksgiving approaches Portland International Airport (PDX)  expects to see about a 5% to 7% increase to current travel numbers.

According to the Port of Portland:

Factoring in the slight uptick in holiday travel forecasted from the Friday before Thanksgiving to the Monday following the holiday, PDX expects to welcome just over 200,000 travelers during this time period. The peak day in that period looks to be Sunday, Nov. 29 with an expected 25,250 travelers that day.

For comparison, during the same 10-day November holiday period in 2019, PDX welcomed more than 500,000 travelers; the busiest day saw 56,000 travelers. So while PDX will be less busy this year, the number of people traveling through the airport remains significant.

With growing concerns about rising infection rates, KGW set out to Verify: Do airlines have banned passenger lists for people who don't follow COVID protocols?

We checked in with major airlines in the United States to see what they are doing to ensure that passengers follow COVID-19 safety protocol and wear masks. Here is what we found out:

United Airlines released a statement earlier this year that beginning on June 18, any passenger not wearing a mask on United flights would be placed on an internal travel restriction list.

Media relations at United said, “If you refuse to follow United's face covering policy while in the airport or onboard a United flight, you may be refused transport and could also lose your travel privileges on United for a certain period of time that will be determined when we review the incident.”

If a United passenger does not comply with the face mask requirement after being warned and offered a mask, then a United representative or flight attendant will report the incident. A security team will investigate the incident after the flight has landed and take the necessary action regarding the customer's travel on future United flights. The mask non-compliance number at last check was 370 passengers.

Delta Air Lines has strict mask mandates. If Delta passengers do not comply with the airline’s COVID-19 protocol they will be placed on a no-fly list. The New York Post reported that as of Nov. 12, nearly 550 people had been placed on travel restriction lists for Delta Air Lines. Presumably, since that date, the number on the list has increased.

Spirit Airlines has various COVID-19 safety protocols in place, one of them being a mask mandate. Their website states:

Spirit requires appropriate face coverings during your entire journey with us. Face coverings must be worn (correctly) while at the airport, on the jet bridge, and onboard the aircraft.

If passengers do not comply with these guidelines they will be put on a travel restriction list for future travel through Spirit Airlines.

Earlier this year American Airlines stated that it would ban customers who did not follow COVID-19 safety protocols from traveling with them in the future:

A face covering is required while flying on American, except for children under 2 years old. If you decline to wear one, you may be denied boarding and future travel on American.

JetBlue specifies on their website that customers over the age of 2 must wear face coverings over their nose and mouth during the entirety of their journey. However, they do not indicate whether or not noncompliant customers will be banned from JetBlue travel in the future.

Southwest’s approach is to prevent individuals who choose not to wear a face-covering or mask from boarding our aircraft by informing them of our mandatory face-covering policy prior to travel via Southwest’s Customer Health Declaration, which must be acknowledged and appears during the online check-in process.

Southwest, however, does not track face-covering compliance issues for public release and as such does not have an internal travel restriction list.

The Alaska Airlines website states that a face mask is required for all persons over 2 years of age during the duration of the flight, including boarding and deplaning. If a passenger refuses to comply with the mask mandate after being warned, they will be given a final warning in the form of a yellow card.

Noncompliant passengers may be banned or suspended from flying with Alaska Airlines in the future.

KGW's VERIFY team reached out to Alaska Airlines after a passenger flying out of PDX took photos of six different passengers without maks on his flight to Mexico and home to Portland.

“Photos like these of guests not following our “No Mask, No Travel” policy is a big deal. We are following-up with the management team to make them aware of the incidents. We will also reach out to our employees involved to ensure they feel supported and empowered to enforce our “No Mask, No Travel” policy. There is nothing more important than the safety of our guests and employees, and mask usage is an essential aspect of their health and safety.

As an aside, it is worth pointing out that we’ve banned 181 guests for noncompliance.”

It should be noted that all airlines mentioned recommend that any customers who cannot wear face coverings due to a medical condition or disability should postpone their travel until the temporary mask requirements are no longer in place.

Again, the Centers for Disease Control and Prevention does not recommend travel unless absolutely necessary.

Do you have something you want us to Verify? Let us know. Email Verify@kgw.com