Dave 'Dino' DeNatale looks at what we know about the Bishop Sycamore high school football controversy and why it's a concern going forward. 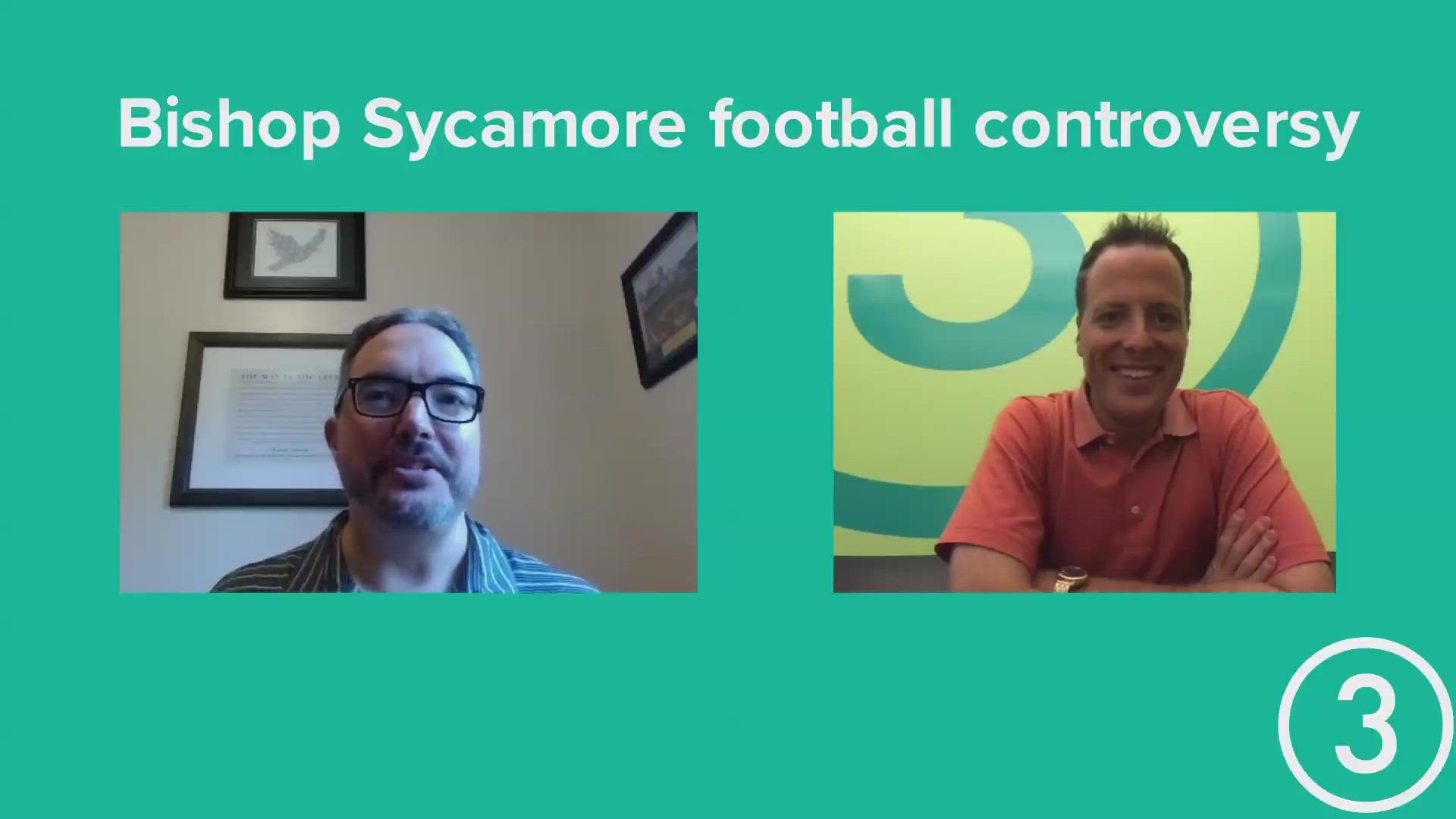 CLEVELAND — I've seen a lot of crazy things in 23 years of covering sports in Northeast Ohio.

But I'm not sure I've ever come across anything more bizarre than the Bishop Sycamore high school football debacle.

If you're a little late to the party, let's catch you up on what happened and what we know now.

This past Sunday, Canton's Tom Benson Hall of Fame Stadium played host to a high school football game between Florida's IMG Academy and Bishop Sycamore, a team allegedly from the Columbus area. The game was broadcast on ESPN.

If you were watching the game on "The Worldwide Leader," it was apparent that not everything was as advertised about this team from Ohio.

“Bishop Sycamore told us they had a number of Division One prospects on their roster. To be honest, a lot of that we could not verify,” one commentator could be heard saying during the game.

Since that nationally televised blowout aired Sunday, we've discovered there's a lot we know, and more that we don't know about this mysterious school from Columbus.

For instance, the team apparently also played on on Friday night in western Pennsylvania against Sto-Rox, losing 19-7. Playing two games in three days NEVER happens in high school football. Ever.

How about this? The Ohio Department of Education doesn't list a school under the name Bishop Sycamore and The Ohio High School Athletic Association said the school is not within their membership, therefore, they do not follow the association's rules.

According to our sister station 10 TV WBNS, Bishop Sycamore was listed as a “non-charter, non-tax supported school” last year. A spokeswoman for the Ohio Department of Education wrote in an email that: “As of last Friday Bishop Sycamore had not submitted an annual notification to be listed with the Department as a Non-chartered, Non-Tax school for the 2021-22 school year. They have until 9/30 to do so.”

Documents provided by the state from last year show the school planned to use a “blended attendance and learning model” and that both “online and traditional learning.”

In an effort to reach out to the school, 3News' Laura Caso visited Bishop Sycamore’s website, but it appeared to be taken down. However, there are several locations listed for the school, including a recreation center in Columbus. An employee at the center says there is no affiliation between it and Bishop Sycamore. Additionally, another address listed for the school is the Franklin University Library in Columbus. The University’s spokeswoman tells 3News in 2020 someone from Bishop Sycamore reached out to inquire about leasing some space, however, it never panned out and there is no affiliation.

Clearly, there is a lot more for us to dig up about this team.

As a broadcaster who cares passionately about high school football in this area, I want to know how in the world did they get selected to be on ESPN? Who thought that a team with so many question marks deserved to be showcased on national television?

ESPN released a statement saying, "we regret that this happened and have discussed it with Paragon, which secured the matchup and handles the majority of our high school event scheduling. They have ensured us that they will take steps to prevent this kind of situation from happening moving forward."

In a statement provided to 3News, Paragon Marketing Group, who scheduled the game, admitted that it was "misled" by Bishop Sycamore.

"On the Paragon end the vetting process should have been much more thorough in the weeks leading up to the game," the company added.

Uhh, there was no vetting done here, guys. None.

How did this team with no paper trail get to a point where they could play us all for fools?

Apparently, this is not the first time that Roy Johnson, the now-former coach of Bishop Sycamore, has engaged in suspicious behavior.

In an interview with 10TV's Kevin Landers, Aaron Boyd of Cincinnati talked about his experience of playing for Johnson in 2018 at Christians of Faith Academy, a supposed online school. His recollections are eye-opening.

Boyd said when he arrived in Columbus the team was sleeping in a Delaware County hotel after coaches told them they were waiting for their dorms to be ready.

“Instead we ended up going from place to place like Airbnb's. At one point I stayed with a girl in her college dorm,” he said.

He was also promised food, but then he said the money ran out so he and other players did what they needed to do to survive.

“Dine and dash. Take food from grocery stores and all that,” Boyd added.

Landers also reports that Johnson has an active warrant and is facing charges of alleged fraud.

If I could do an interview with Andre Peterson, the director of Bishop Sycamore, I'd want to know the following:

What is the purpose of your school/football team? Is it to give kids a chance to perform against top-level competition in hopes of a chance for a college scholarship? Fine, then if so, why are you playing them twice in one weekend? Why don't you have a set roster of players? Do you have players who are over 19 years old?

How much is the enrollment for the 'student-athletes'? How are you raising money to pay for the team to travel across the midwest? How are you paying for their meals and accommodations? Is that why it became necessary to raise money via GoFundMe? Our sister station at 10TV noted the account was seeking $20,000. As of Tuesday, it was shut down.

Where are your players getting their educations? We can't seem to find a school, a building, an address, anything that would indicate an institution of learning.

And that's just the beginning. Are there kids on the team like Aaron Boyd, who thought they were getting a great oppportunity, but who are being used for some unknown endgame?

Why did this happen?

I love high school football. It's brought me many memorable moments as a broadcaster and I'm a big fan in general. There's nothing better than watching two teams in Northeast Ohio go at it under the 'Friday Night Lights' on a cool autumn evening. I'm a bit of a Pollyanna, but there's still some purity to the sport.

That said, I'm all for out-of-the-box thinking when it comes to starting charter schools and putting together institutions like IMG Academy. If it gives student-athletes opportunities they wouldn't normally have, while ensuring their education, I'm on board.

But something stinks here.