Leon Bibb reports: The Buckeye Trail, an Ohio pathway 1,444 miles long, calls for hikers to walk its distance and see almost every part of the state

The Buckeye Trail winds its way through every corner of Ohio, with markings ever few yards to show the way. 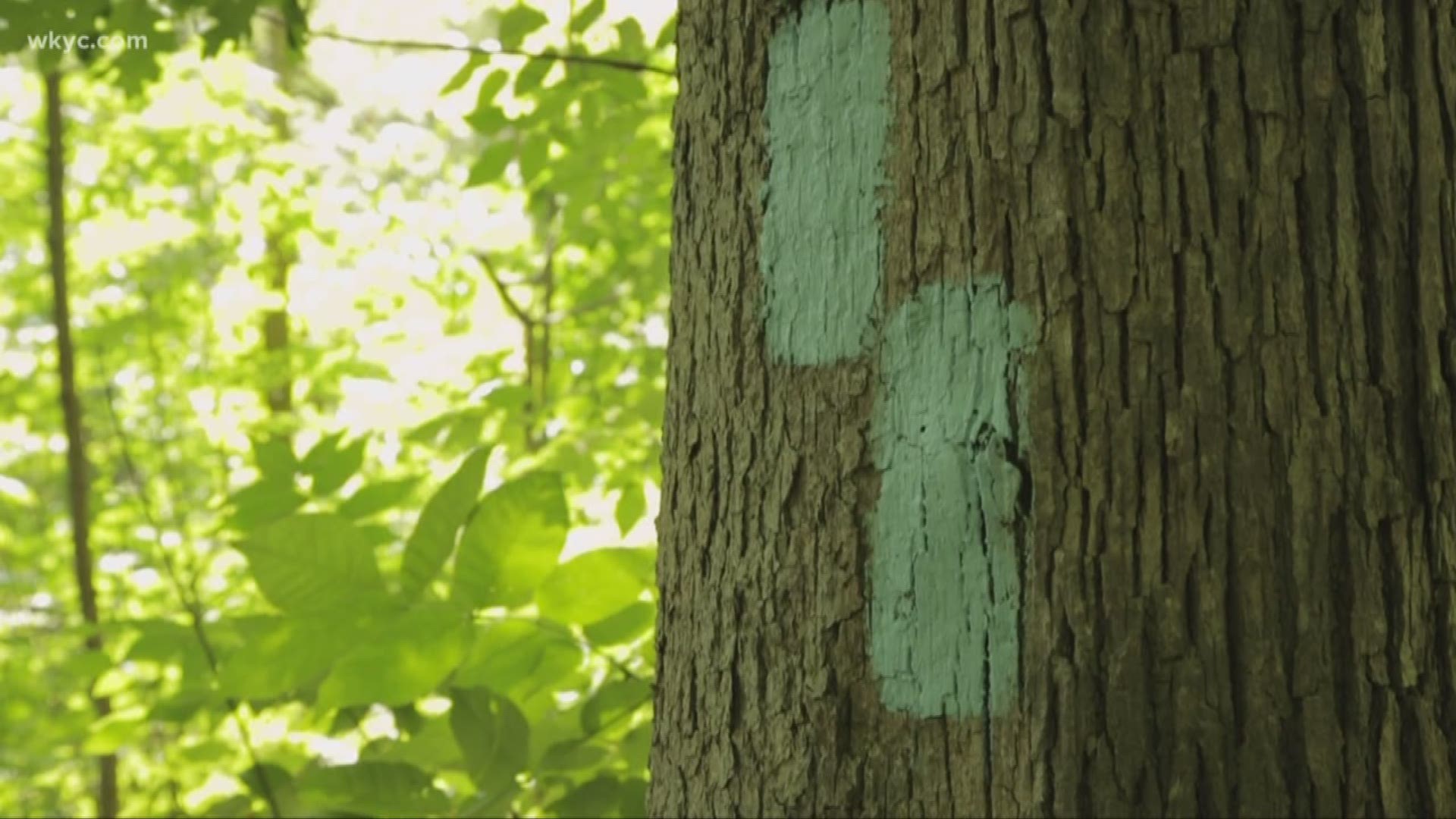 BRECKSVILLE, Ohio — When I met Bob Morecki, he was already on the trail, and probably would have walked the entire state of Ohio if he had the time. He certainly has the attitude for a hike that could cover every quadrant of the state.

Morecki is a supervisor of part of this unique hiking pathway, which at 1,444 miles is Ohio's longest scenic hiking trail. Morecki was standing at the Brecksville entrance to the Buckeye Trail, which winds through parts of the Cleveland Metroparks and then takes a sharp turn southward into the Cuyahoga Valley Recreational Area.

From there, the trail continues toward the Ohio River, heads west toward Cincinncati, and then begins its northward march to the Toledo area before shadowing the Lake Erie shoreline for Greater Cleveland.

"You should be able to go completely around the entire state of Ohio," Morecki said.

He is one of many volunteers who help maintain the walking trail along, with others who work in the various federal, state, and local park systems through which the Buckeye Trail passes.

"The idea was to connect Lake Erie to the Ohio," Morecki said.

It began in 1959. Much of the credit is given to Emma Gatewood—called Ohio's hiking great-grandmother—who had completed walking the Appalachian Trail. Others were there, too, pushing the idea of a trail which would go through Ohio. In 1967, the state legislature designated the Buckeye Trail as Ohio's official trail.

Eventually, the trail grew, and now winds through 49 of Ohio's 88 counties. Every few yards, there are blue paint markings on trees of the trail, pointing the way. Follow the blue markings and you cannot get lost.

"It goes through towns that we never would otherwise see and we get to meet people that we never otherwise would have met," Morecki, walking with a paint can of blue paint and a brush to refresh the weathered blue markings on the trees, told me.

As Morecki and I walked the trail in the Brecksville area, we ran into others on the pathway. Scott Brown was taking a jog through the wooded area, enjoying the sunshine of a Summer day.  We joked with him about the idea of traveling all 1,444 miles.

"That would take me a couple of years," the hiker said. "Today, it's just going to be three miles."

However, there are hikers who have traveled the entire trail. Morecki said there currently was one man doing that. That hiker is somewhere out there, pushing forward.

Interestingly, there is no beginning or ending to the Buckeye Trail. Since it is basically a circle or oval, a hiker can enter at any place and end the trek at any place.

Morecki emphasized the peacefulness of the trail, saying a walker can experience something spiritual in walking the pathway, or in any wooded area. He added people are always looking to get away from the fast-paced and sometimes stressful lives they lead, and that nature can provide the getaway and the Buckeye Trail can meet that need.

As we walked and talked, I began to think about the classic 1939 movie The Wizard of Oz. In that story, Dorothy (played by actress Judy Garland) was in search of the land of Oz, where so many wonderful things were to occur once she and those accompanying her got there. "Follow the yellow brick road" was the advice to get to Oz and what Dorothy was told was a land of peace and harmony.

On the Buckeye Trail, the idea is to follow the blue trail blazer marks tattooed to trees in what is called "Buckeye Blue" paint. Keep following those blazes, and the hiker can find a peace and harmony.

Really, all that can be found, step by step, on the Buckeye Trail as it winds through the entire state of Ohio.