A news reporter who covered the Cuyahoga River burn which gave Cleveland a bad name recognizes the positive U.S. environmental movement which grew from the fire. 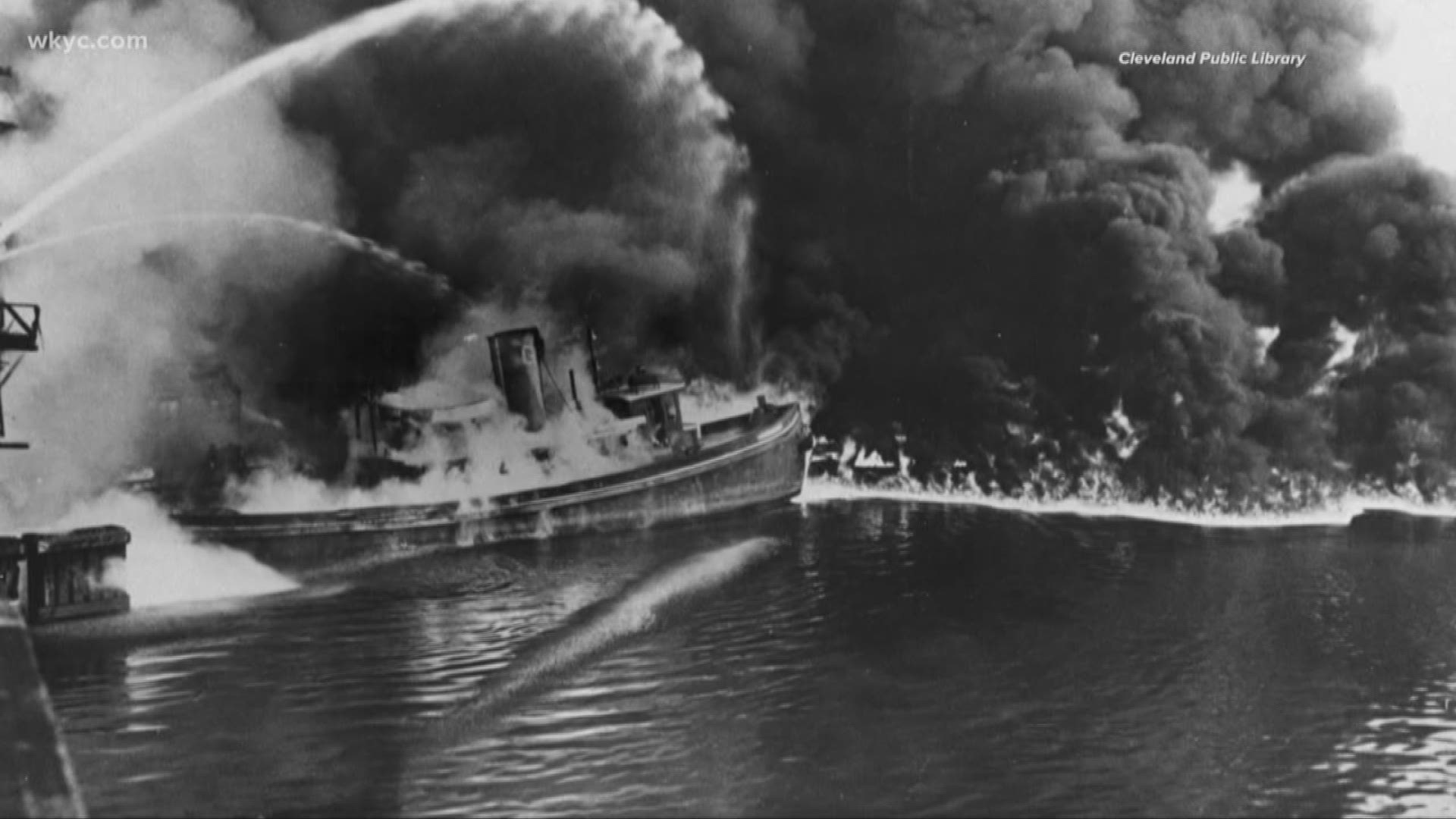 CLEVELAND — The Summer day had begun in an uneventful way until a few sparks from the turning wheels of a train fell into an oil slick, propelling Cleveland into a bad light which the world would see.

It was Sunday, June 22, 1969, when the the train passed over the Cuyahoga River, eventually ushering Cleveland and the entire United States into an environmental movement which would reshape the nation.

In 1969, as the Cuyahoga River moved slowly toward its end point at Lake Erie, it carried with it huge amounts of toxic liquids and solid debris.  As the train crossed a trestle, the sparks from its wheels dropped from the locomotive, igniting an oil slick which was larger than a football field.

Although the fire was reported was a small one, especially when compared to dozens of other oil- and trash-fueled fires on the river, the train crew could not douse the flames from their position on the trestle.

"The fire was inconsequential," said Paul Nelson who has chronicled that day through records kept at the Western Reserve Fire Museum where he is a volunteer.

The train crew then called the Cleveland Fire Division and the call was received in what is now the fire museum. Hand-written notes in an official log kept by the fire battalion chief point to the arrival time of the firefighters and what they found.

Pouring over the old log, Nelson recounted what the battalion chief had written. "It was then accelerating onto the trestle and caught the trestle afire," said Nelson.

Within minutes of the fire alarm going out, Joe Mosbrook, a reporter for WKYC Radio and Channel 3 Television arrived on the scene. Fifty years later, walking along the banks of the Cuyahoga River, Mosbrook remembered the assignment when he covered the story for the radio station. "There was some damage to the trestle. It wasn't destroyed by any means," he said. "It was just a small fire."

Mosbrook showed a copy of the newspaper report the next day on the fire.  It was relegated to page 11 of The Plain Dealer, the Cleveland morning newspaper.  He said there had been many such fires on the Cuyahoga and the fire, although trouble, was not all that unusual. In the twenty years before 1969, there had been about 15 similar fires, some of them larger.

But the small fire, which was handled quickly by Cleveland firefighters, began the environmental movement. The first step toward that movement came when Time Magazine published a story on the river burning. However, the magazine printed a photograph of a 1952 blaze which was considerably larger.

"It kicked off an environmental revolution, even though the actual event was a minor fire on the river," remembers Mosbrook. The day after the fire, Mosbrook covered Cleveland Mayor Carl Stokes' riverside news conference where Stokes pointed the finger at industrial businesses dumping their wastes in the water.

From that point, voices grew louder as they demanded cleaner water and air. Songs were written about the burning Cuyahoga River and Cleveland was called "a disaster" because of the heavily-polluted river.  Other U.S. waterways were also singled out.

Stokes' brother, Congressman Louis Stokes, went to work with other lawmakers pushing for change and an increased emphasis on the environment. From the Cuyahoga River story came the Clean Water Act of 1974 and the birth of the U.S. Environmental Protection Agency.

RELATED: Rebirth of Cuyahoga River helps rebirth of The Flats

Fifty years after the disastrous fire, the Cuyahoga is clean enough for recreational activities.  Although the river continues as a working waterway, it shares the waters with kayaks and other small boats. There are may restaurants located along the banks of the river as it snakes its way from its beginnings in Summit County, through Cuyahoga County, to its mouth at Lake Erie.

Peter Bode, Central Lake Erie project manager for West Creek Conservancy, sings the praises of the river. He points to the new construction of apartment buildings and condominiums which now face the river for good views of it. Years ago, there were no such dwellings for no one wanted to see the pollution and floating filth in the waterway.

As one retired Cleveland firefighter remembered:  "Years ago, if you fell into the river, you had to be taken to the hospital to be checked out by doctors."

The water is clean enough for fish, which the Ohio EPA has judged good enough for human consumption.  That is how far the river has come.

Cleveland still fights the old image of a burning river, but indications are the work continues on keeping the Cuyahoga a cleaner waterway, snaking its way to Lake Erie.

There is no Cleveland celebration of the fire 50 years ago. What there is is a commemoration of a very troubling time. Still, there are major celebrations scheduled for July as Cleveland applauds what it and the rest of the nation did to clean up the waterway.

The Cuyahoga River, running through the center of Cleveland, was "Ground Zero" of a movement to push for clean water and clean air throughout the nation.

On the waterway now are major iron ore carriers, small private boaters, and single-person kayaks. They all share the water as Cleveland and the nation understand now that all can share the river because all are following the cleaner currents of the river which changed a nation.