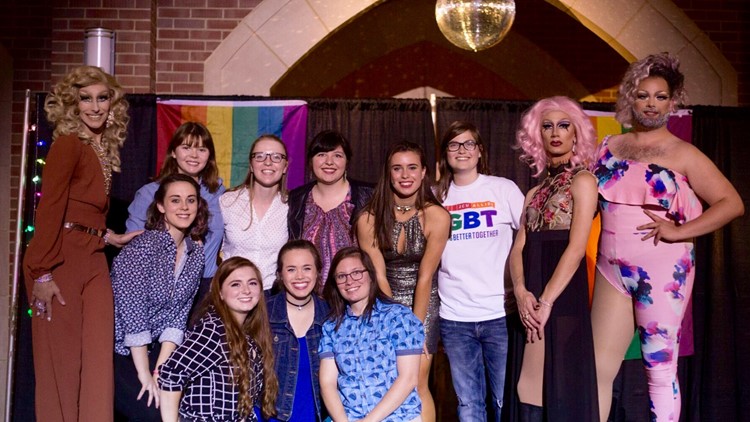 Photo by: Ashley Bernett
John Carroll University students pose with professional drag queens at one of the past annual student-run drag shows.

UNIVERSITY HEIGHTS, Ohio — John Carroll University students feel like they’ve been left in the dark as to why the annual student-run drag show was canceled and the Foundation for Individual Rights in Education has called on JCU to reinstate the show, following an official statement from university president Dr. Michael Johnson on Monday.

At the start of the week, Johnson wrote to students just before 5:00 p.m. in an email obtained by WKYC: “John Carroll unambiguously supports our LGBTQIA+ community of students, faculty and staff. How best to do so is the question at hand. In my judgment, the drag show is not the best way to proceed.”

Leah VanDine, who serves as the John Carroll Student Government Vice President of Diversity, Equity, and Inclusion, told WKYC on Tuesday, “This is not enough for the student activists and the LGBTQIA+ community on campus.”

Johnson also vaguely referenced an op-ed written in the school newspaper following last year’s event, that criticized the school for allowing the performance in Fall of 2018.

FIRE spokesperson Daniel Burnett shared the letter the organization sent to JCU on Tuesday with WKYC, which read in part: "If students’ freedom of expression rises or falls based on whether that expression is acceptable to other members of the community, they have no such freedom at all, and the institution’s commitments have no meaning.”

Flyers in protest of the cancelation of the student body's 7th annual drag show hang on campus at John Carroll University in University Heights on Friday, September 6, 2019..
Leah VanDine

The canceling of what would have been the seventh annual drag show on JCU’s University Heights campus was confirmed before Johnson emailed the student body by a school spokesperson in a statement made to Cleveland.com on Thursday, citing “divisiveness” among the student body.

“We are working with our students on new and more extensive programming that will promote the expression, appreciation and understanding of the many identities represented at John Carroll University,” the spokesperson said at the time.

“We are also engaging with community partners, alumni, and experts to advance the understanding of different points of view related to sexuality, faith, inclusion and respect.”

Johnson added on Monday: “We need more and better programming that promotes the awareness and understanding of all identities on campus, especially our LGBTQIA+ students, and creates broader engagement.”

VanDine said that Johnson's statement from Monday does not address his decision-making process. “He does not recognize the harm that his decision has caused to the LGBTQIA+ community and the discrimination that we are facing, not only by the Catholic church, but now by the University,” VanDine said.

Speaking specifically about the canceling of the student-run drag show at JCU, VanDine previously told WKCY: “This is clear discrimination against the LGBTQIA+ community on campus.”

When asked whether any students had planned to perform at the now-canceled drag show, VanDine said the groups made the decision to hire professional performers out of concern for their classmates’ safety.

“Members of the LGBTQIA+ community have felt unwelcome and like they’re not truly at home here on campus since the incident that occurred last year,” VanDine said.

The “incident” VanDine is referring to is the Oct. 1, 2018 publication of an op-ed which called the drag show “a flagrant celebration of sexual perversity.”

It was written by Declan Leary, who was then the op-ed editor of the student newspaper The Carroll News. At the time, the school publication stood behind the column as an expression of free speech.

Johnson addressed the op-ed in his email on Monday.

“Back in April, I communicated my concerns regarding the divisiveness on campus related to the Carroll News and the need for respectful discourse. Recently I met with students, faculty and staff regarding my decision to not hold a drag show on campus at this time,” Johnson said.

“It became clear to me that repeating what we did last year would only add to the divisiveness and discontent, and fail to advance our goal. I also informed the students that we will re-evaluate where we stand as we get closer to the end of the academic year, but not before.”

VanDine said she first became aware the show would not go on during a meeting with JCU President Michael Johnson on Aug. 28.

RELATED: Students attempt to save annual drag show at John Carroll University after it was canceled due to 'divisiveness'

VanDine was joined at what she said was a 30-minute meeting by fellow seniors, LGBTQIA+ Allies president Autumn Franz and Student Union Programming Board president Eddie Jenkins, the leaders of the two campus groups that were sponsoring this year’s drag show

Drag queen Anhedonia Delight, who is not only a JCU alumni but also founded the school's drag show return in 2013 after a 10-year hiatus, told WKYC she had already been booked to perform at the show, which was supposed to happen on Saturday.

"I left the annual drag show as my legacy as the previous president of the LGBTQ student organization on campus," she told WKYC.

"There were never any issues with the event or the programming for the show and I was happy to be the first person invited back as an alum to perform since graduating in 2015. I honestly feel very blindsided by this cancelation."

She added: "This is especially disconcerting given the fact that so many students and faculty who have seen the show in the past have commented about how inspiring it is. The vagueness from the university as to why the show was canceled is incredibly frustrating."

Last week, Delight posted a screenshot of a GoFundMe page for an off-campus performance set up by VanDine and fellow student Lauren Phillip with the note, “Wow. When voices turn in to activism.”

Delight also added the hashtag being used by the student activists, #DragforJCU.

The students are hoping to raise $3,000 to help pay for “a venue, paying the drag queens, transportation, and other necessities,” according to the site, and so far have raised $2,053.

"Given what's happening now, if I could do it over again, I may not have attended JCU because the university is openly dismissing the voices and visibility of many oppressed people on the campus," Delight said.

In his email on Monday, Johnson said that was not JCU’s goal.

“Our goal and guiding principle with respect to student programming is clear. That is to provide students with opportunities that promote the expression, appreciation and understanding of the many identities represented at John Carroll University,” Johnson wrote.

“Our educational mission remains grounded in the integration of faith and culture and a respect for the dignity of the human person. We welcome and support all of our students.”

Johnson added, “While I do not expect everyone to agree with the decision, I ask that you respect the decision.”

Those that do disagree with the university’s decision have weighed in on social media using the hashtag #DragforJCU.

JCU alumni David Young, who according to his Twitter biography is now a PhD candidate at Duquesne University, tweeted on Friday:

“Academic Twitter: John Carroll U (where I earned my MA) decided to cancel the annual drag show bc it hurt the feelings of a few straight, white males. The event is a big deal for the LGBTQ+ community on this conservative campus.”

Alumna Kate D., who is now a political science candidate, tweeted on Tuesday: “The drag show was a tradition and important event that boosted LGBTQ+ visibility on John Carroll's campus. As an alum, I'm extremely disappointed that @jcupresident has made this decision.”

She later added, "Catholic institutions have historically been unnecessarily anti-LGBTQ+. Many orgs, students, and faculty on campus during my time worked tirelessly to tear down this barrier to make JCU a more accepting campus. @jcupresident, this is a HUGE step back."

So far, the students' petition to save the show has been signed by nearly 850 people.

WKYC has reached out to JCU seeking additional comment on the cancelation of the drag show and is awaiting a reply.

VanDine told WKYC she hopes to hold an off-campus version of the event by the beginning of October, contingent on the amount of donations received.

Those interested can read the full letter sent to JCU by F.I.R.E. below.