Here's a look at Meyer's coaching career, which began at and continues now at Ohio State. 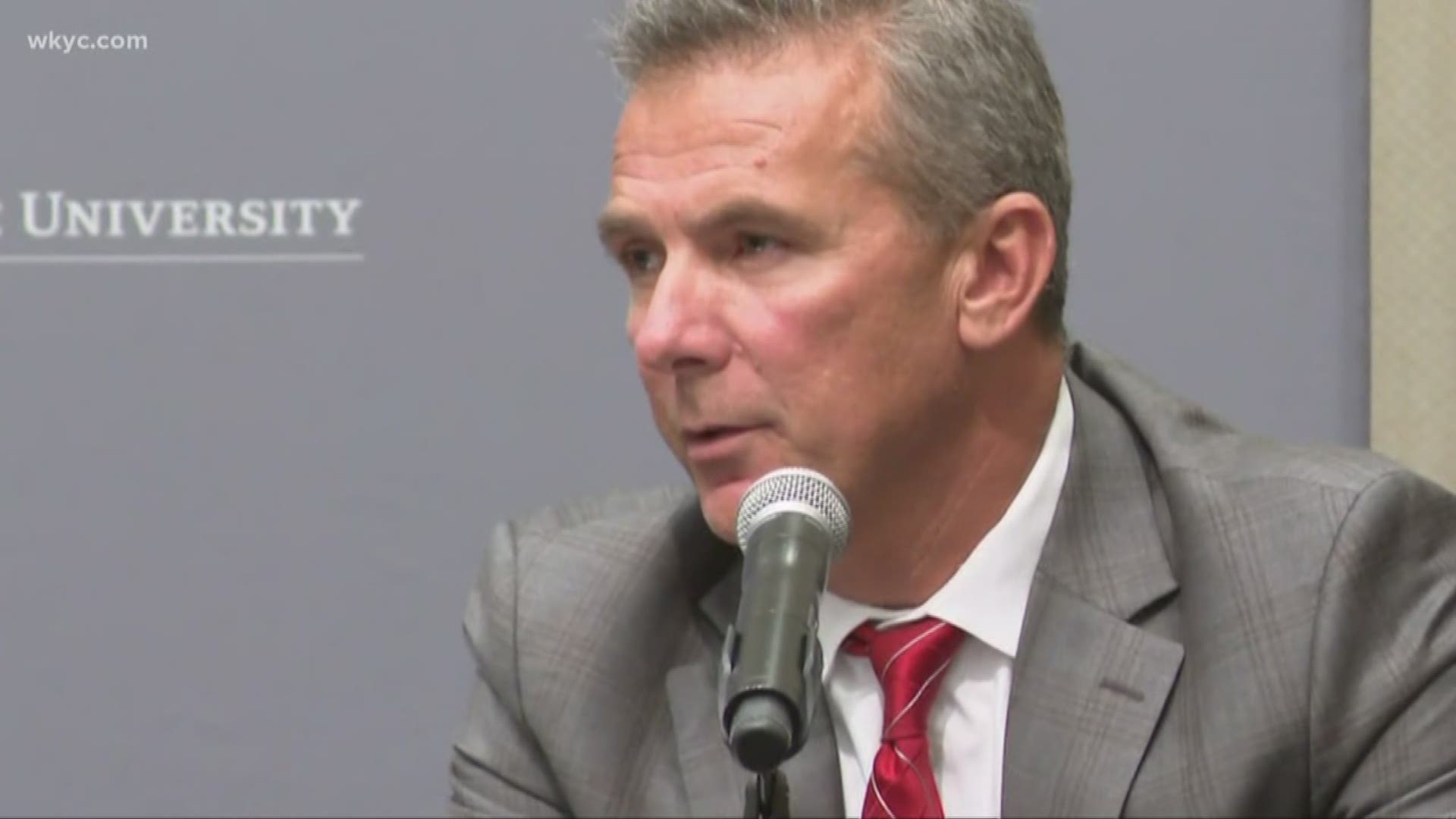 Urban Meyer has been a fixture in college football for more than 30 years, first as an assistant at some of the top programs and next as one of the most successful head coaches of this or any era.

With that success has come controversy. The latest, Meyer's handling of allegations of domestic abuse involving one of his former assistant coaches at Ohio State. Earlier controversies from his time at Florida plagued Meyer even after his departure from the program in 2010.

The one constant: winning. Here’s a look at Meyer’s coaching career, which began and ends at the same place — Ohio State.

Meyer graduates from Cincinnati, where he played defensive back, and is hired by then-Ohio State coach Earle Bruce — the grandfather of former wide receivers coach Zach Smith — as a graduate assistant. He spends two years in that position before spending 1988 and 1989 as an assistant coach at Illinois State.

Meyer’s first break comes as the wide receivers coach at Colorado State, reuniting with Bruce, who was fired at Ohio State following the 1987 season. Meyer spends six seasons in that position with the Rams.

Meyer is hired at Notre Dame, again to coach the wide receivers, under Lou Holtz. Meyer got the job through Holtz’s son, Skip, who knew Meyer from his stint at Colorado State. Meyer would remain on the Fighting Irish staff when Holtz was replaced in 1997 by Bob Davie, and would continue in the position through 2000.

Now 36, Meyer is hired by a Bowling Green program coming off a two-win season in 2000. He quickly turned the Falcons into a Mid-American Conference contender. Bowling Green won eight games in Meyer’s first season and nine games a year later, making his 73.9% winning percentage the second-best in program history.

Meyer took another step up the coaching ladder by moving to Utah, then a member of the Mountain West Conference, and as at Bowling Green was quickly able to turn the Utes into a conference and national contender. After going 10-2 and securing a spot in the Top 25 in 2003, Meyer’s second team — led by an eventual No. 1 overall pick in quarterback Alex Smith — went 11-0 in the regular season and earned a spot in the Bowl Championship Series, where it defeated Pittsburgh in the Fiesta Bowl.

Meyer’s rise into the hottest coaching name in college football was complete: Notre Dame was fast after his services, with a consensus that Meyer would sign on as Tyrone Willingham’s replacement, but he instead chose Florida. “At the University of Florida, you have everything in place to make a run at the whole thing, and that was a factor,” he said. His first team went 9-3 and finished No. 16 in the final poll, but Meyer’s biggest win came on the recruiting trail: Florida won the battle for Tim Tebow.

RELATED | Dave Chudowsky: No matter your feelings, Urban Meyer is one of the greats

And then there was a second title. The 2007 season was highlighted by Tebow’s Heisman Trophy yet marked a disappointment, with just nine wins and a third-place finish in the SEC East. The 2008 team is widely viewed as one of the best of the BCS era, driven by Tebow, a loaded roster of future NFL contributors and a mentality forged by an avoidable regular-season loss to Mississippi.

Citing a recent medical scare following a loss to Alabama in the SEC title game and a desire to spend more time with his family, Meyer resigns as Florida’s head coach. Temporarily, at least. He would coach in Florida’s bowl game, a win against Cincinnati. He then returned to full-time duties in March.

Meyer resigns, this time for good. “I know it is time to put my focus on my family and life away from the field,” he said in a statement. The Gators struggled through a grinding regular season and win the Outback Bowl to finish 8-5, though outside of the Top 25. It’s the worst finish of Meyer’s coaching career.

Meyer spends the 2011 season as an analyst and color commentator for ESPN.

After nearly two weeks of publicly denying reports linking him to the open Ohio State job — his predecessor, Jim Tressel, was fired for lying to his superiors about NCAA sanctions — Meyer is named as the Buckeyes’ next head coach.

His first team runs the table, going a perfect 12-0 and capping its regular season with a win against Michigan, but is ineligible for the conference title game and resulting bowl berth due to preexisting NCAA sanctions. The Buckeyes finish No. 3 in the Associated Press poll, however, and the program is off and running.

The third national title of Meyer’s career came in the first year of the College Football Playoff, and placed Meyer in elite company: as just the third coach in FBS history to win championships and two different universities. While a controversial pick for the playoff field, OSU upset Alabama and then ran over Oregon to capture the title.

Ohio State captures the Big Ten championship with a narrow win against Wisconsin but is left just outside the playoff field.

Ohio State places Meyer on administrative leave as its investigates whether or not he was aware of the allegations of domestic abuse involving former wide receivers coach Zach Smith, an original hire on his OSU staff in 2012. While Meyer denied at Big Ten media days knowing of a 2015 incident involving Smith, recent reports indicate he may have been informed by his wife, Shelley, who was in communication with Smith’s ex-wife.

Meyer, in a statement released on Twitter, said he was aware of the 2015 incident and reported it. He also apologized for saying at Big Ten Media Days that he didn't know about it. "My intention was not to say anything inaccurate or misleading," the statement said. "However, I was not adequately prepared to discuss these sensitive personnel issues with the media, and I apologize for the way I handled those questions.”

Ohio State University announced that Meyer was suspended without pay for three games for how he handled allegations of domestic abuse involving former assistant coach Zach Smith. "I appreciate the opportunity to learn from a mistake," Meyer said at the press conference announcing the decision. Athletic director Gene Smith was also suspended without pay for his involvement in the scandal.

Ohio State defeated No. 4 Michigan 62-39 to win the Big Ten East. The impressive victory against the nation's No. 1-ranked defense makes the Buckeyes 11-1 on the season and extends Meyer's record against the rival Wolverines to 7-0. The win also comes several weeks after Meyer announced he is experiencing headaches due to an arachnoid cyst on his brain, leading to speculation about his coaching future.

Three days after winning the Big Ten title and two days after being left out of the College Football Playoff, Urban Meyer announces he will step down as Ohio State coach after the Buckeyes play Washington on Jan. 1 in the Rose Bowl. Ryan Day is announced as his replacement by the school.