Strong reactions to reports of Greg Schiano headed to Tennessee

Greg Schiano's name is trending on Twitter, and it's not with positive feedback. 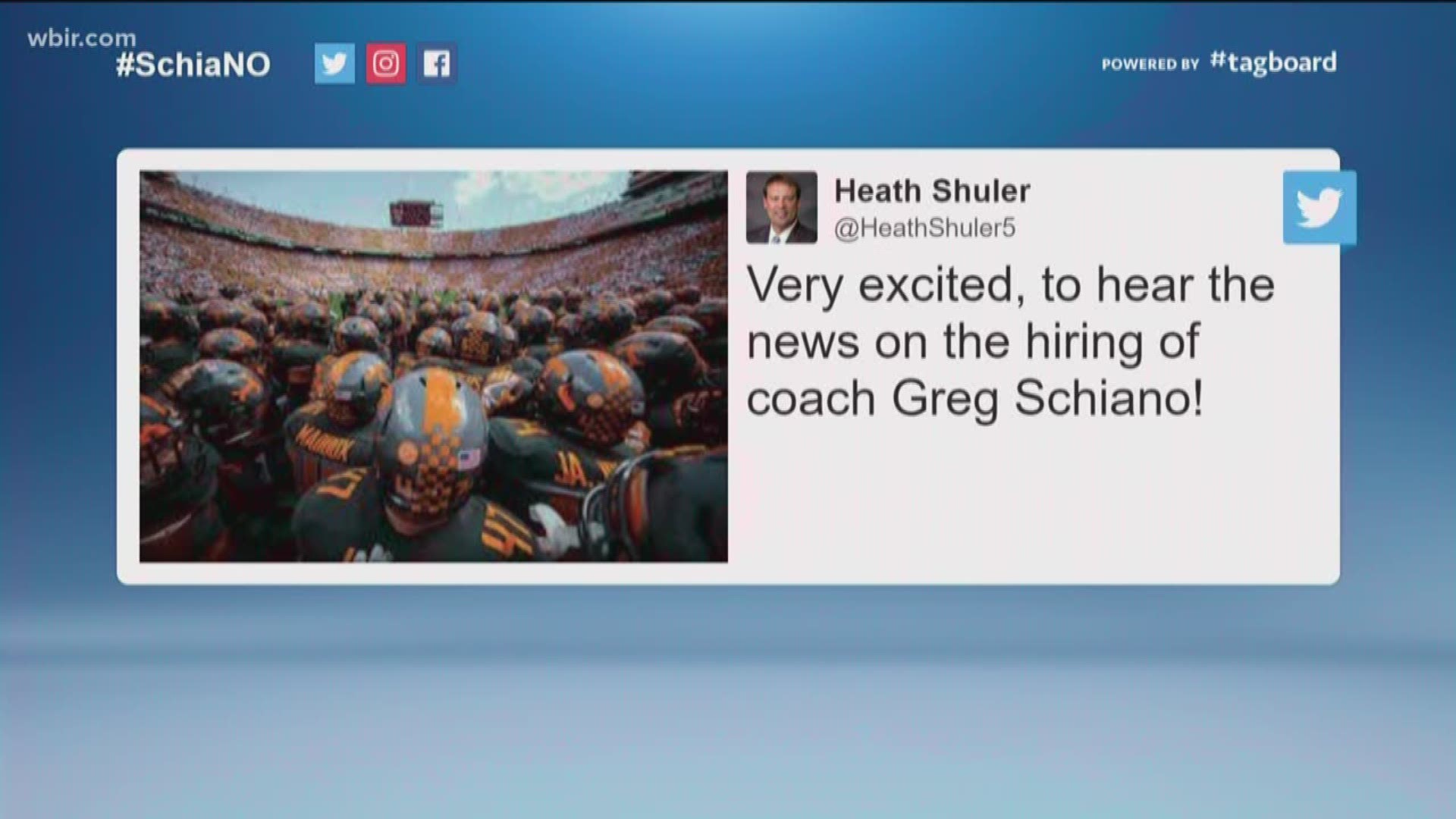 Greg Schiano's name has surfaced as a potential candidate for the open head coach position at the University of Tennessee. That's after a report Tennessee may be finalizing a deal with with the Ohio State University defensive coordinator.

Tennessee House of Representatives, Rep. Eddie Smith (R-Tenn.), said he hopes the rumors about Schiano becoming head coach of Tennessee are not true.

Our Tennessee standards mean something, and a Greg Schiano hire would be anathema to all that our University and our community stand for. I sincerely hope that these rumors are not true, because even serious consideration would be unacceptable.

Our Tennessee standards mean something, and a Greg Schiano hire would be anathema to all that our University and our community stand for. I sincerely hope that these rumors are not true, because even serious consideration would be unacceptable.

Rep. Jason Zachary (R-Tenn.) said he has reach out to the UT Athletic Director John Currie about the potential head coach shift.

I have reached out to @John_Currie and others in administration at UT expressing that WE as a TN Community do not approve of Schiano. #higherstandards

Very excited, to hear the news on the hiring of coach Greg Schiano! pic.twitter.com/GDYjHZCrko

However, Shuler shortly changed his position on the potential hire a few hours after the protest and wants to support the players.

Trying to be positive after several years of ups and downs. Our players need our support. Didn’t know about Penn St issues. Go Vols.

@UTKnoxville if you hire him, the backlash will be insurmountable and devastating to the University and the state.

Honestly I don't know this rumored UT coaching hire from #JohnAdamsHousecat. But judging from my tweet line, Somebody at #UTAthletics should be answering questions quickly.

Right now on Twitter and across most of social media, both hashtags #ShianoUT and #SchiaNO are both trending. Some lifelong Vol fans say they do not want to see Greg Schiano as the new face of Tennessee football.

Many fans are shuffling to Neyland Stadium now as they disagree with the potential hiring of Schiano.

A small group is starting to get together at Neyland Stadium to protest a potential hiring of Greg Schiano. More cars are pulling up as I tweet. pic.twitter.com/urTpCvmvll

As of Sunday at 4:30 p.m., a security guard on UT campus said he and other guards have been informed to work today because of a Tennessee football team meeting later tonight.

Just spoke to a security guard at the athletic center. Says they've been informed to work today because of a Tennessee football team meeting later tonight.

Been told there are about 11 security guards posted around the athletic center.

Rep. Jason Zachary sent a thank you to all who have emailed UT about the potential coaching hire.

Thank you to all those who have emailed regarding UT’s football hire. I can’t reply to so many emails but please know I’m working on your behalf. #HigherStandards

Three businesses have come out to say Greg Schiano is not allowed in their stories. Remedy Coffee, Hops and Hollers and the International are showing their distaste for the potential head coach.

Greg Schiano is not allowed in our venue

Greg Schiano is not allowed in our establishment.

He won’t be allowed in ours either! #NeighborsStickTogether Should add @John_Currie to that list as well!

Tennessee Speaker of the House Beth Harwell has also responded to the potential hire of Greg Schiano.

If true, this is the wrong choice for @Vol_Football. We need a coach who is a true leader and who shares our TN values. https://t.co/9x2sjc4Hf7

One of the candidates running for governor of Tennessee said he hopes the rumors about Greg Schiano are not true.

We expect the highest standards for our public institutions. The special few chosen to lead within those institutions should have a demonstrated history of integrity and character. I hope today’s rumors are not true, because protecting children is more important than anything.