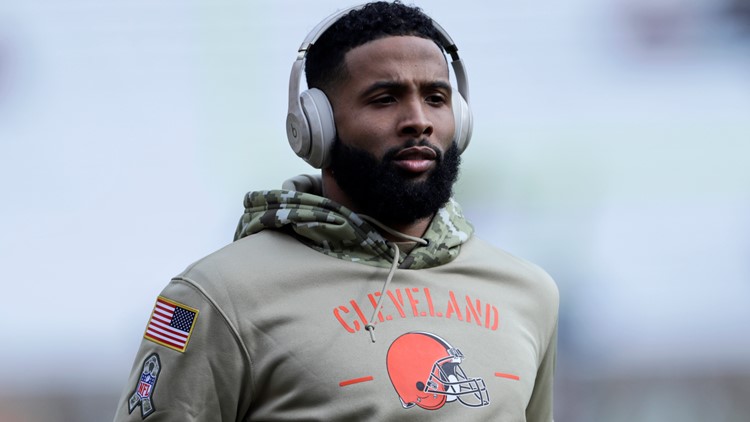 Bud: I’m not a conspiracy guy (except for the moon landing and a bunch of other things) but running Nick Chubb three times in the first half against the league’s worst run defense makes it look like Freddie Kitchens was trying to get fired at halftime. — Tim, C-Town.

Consider it a dead giveaway if he shows up for his exit interview with Jimmy Haslam wearing a “Pilot Flying J Was Guilty” t-shirt.

Bud: Who needs the top-rated sportscasters the Brownies had at the beginning of the season? "Beth + Tiki" did a fine job! — Jim Walsh, Olmsted Falls.

If the Browns lose to an Arizona team that has dropped six in a row, plans are for the final game in Cincinnati to be played with no broadcasters. Just the theme from Benny Hill.

Bud: Does his videotaping of the Browns and Bengals make you wonder if the Patriots’ Cecil B. ‘DeBILL’ is making another disaster flick? — Jim Corrigan, Fairview Park.

As a documentarian, it must hard to resist the chance to pull back the curtain on the magic that is a 1-12 season.

Bud: Isn’t it better the Patriots film the Bengals than the owner at a massage parlor? — O. Bill Stone.

Both are subject to laws specifically prohibiting obscenity.

Hey, Bud: As a child, could Bronny James have asked for a better teacher to learn how to walk? — Keith Jameson, Fairview Park.

There were fewer steps in Riverdance.

Bud: Gerritt Cole just signed with the Yankees for 9 years and $325 million. I know he’s a pitcher but what does that do to the Indians chances of signing Francisco Lindor? I thought someone in your tax bracket have a better feel for it — Kevin.

Despite the high end sweat pants I often wear in public, I’m really not that well off. But I’d say the Cole deal takes signing Lindor from nearly impossible to highly impossible.

Bud: Other than in Catechism class, have any questions you have asked been answered: "Jesus, Bud”? — Michael Sarro.

I once got a look from Albert Belle that said as much. It also said, “Here’s Johnny.” The Nicholson version.

Bud: Really? A tire coming to rest on the trunk of Trevor Bauer's McLaren "totalled" it. What's the body made out of? Unicorn horns? — CJ, Avon Lake.

The women who asked to be taken home after Bauer explained his rules of dating appreciated the acceleration of that McLaren 650S.

Bud: I think we should give Odell Beckham Jr. a break. I hear he’s telling friends he’s very happy in “Clevetown, or whatever they call it.” — Joe W.

You Said It “winners” still have a losing record.