Are the Browns out of control, or just finally out of excuses?: Bud Shaw’s Sports Spin 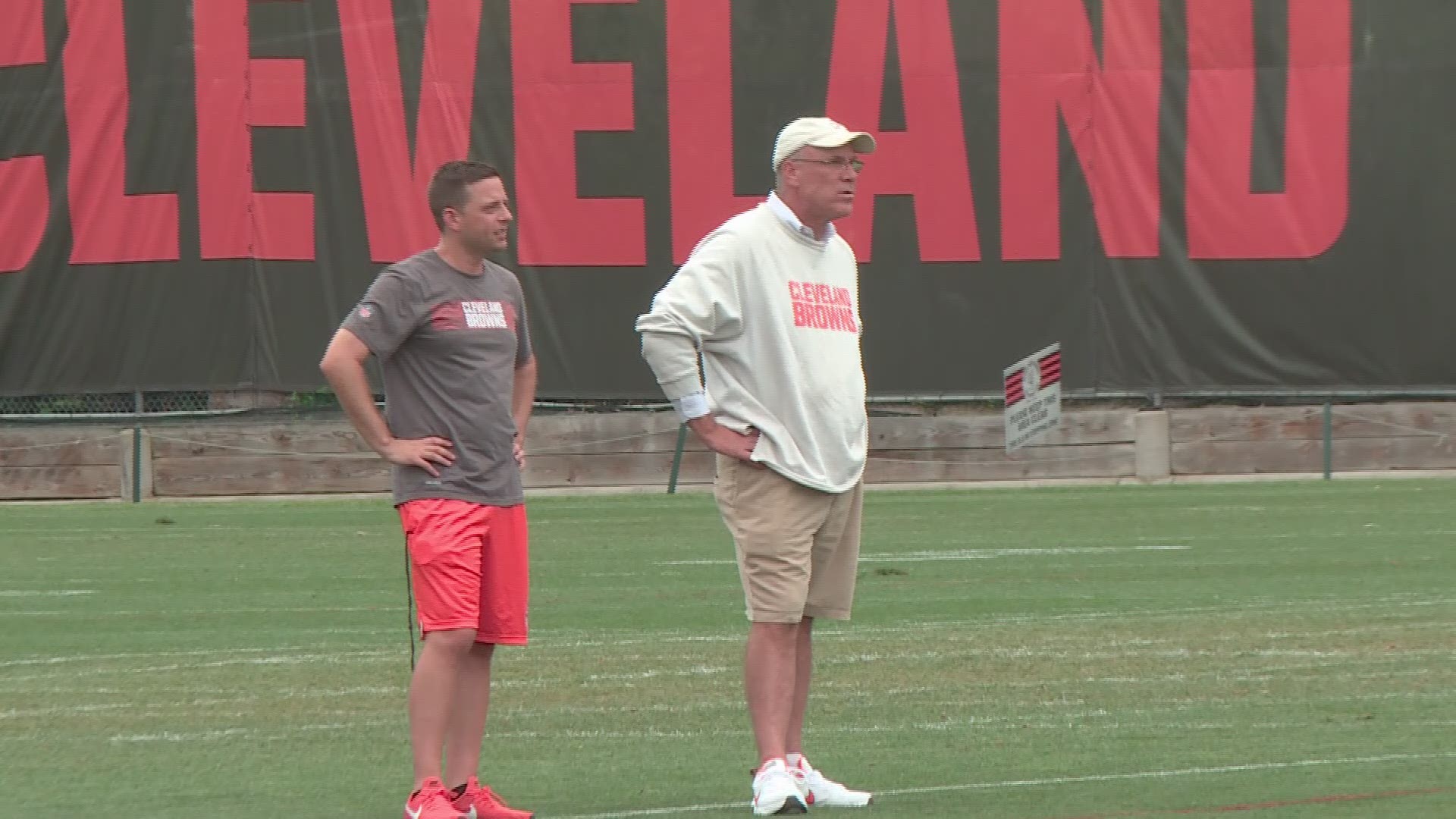 CLEVELAND — Andrew Berry's return to Berea as the Cleveland Browns new GM prompted the front office departures of Alonzo Highsmith and Eliot Wolf, widely lauded just a year ago for their football smarts and experience.

The next NFL running back to reverse field as spectacularly as the Browns do every few years will easily set the single season rushing record and might well make Jim Brown in his prime look more like Trent Richardson.

Not long after the latest moves, Hall of Fame executive Ron Wolf said analytics-driven organizations in the NFL are “out of control.”

“When something goes wrong, who takes responsibility?” Wolf said, via ESPN’s Chris Mortensen. "Their answer: `Well, that's what the data told us.' What a crock. That's what got 'em 1-31."

Wolf’s take is worth examining away from his displeasure over his son being out of a job. It’s also worth noting that at age 81, he operated organizations one way his entire career.

But those two elements are just context. They’re not reason to dismiss his opinion.

RELATED: ‘That’s what got ‘em 1-31.’ Ron Wolf rips Cleveland Browns’ use of analytics, says team is ‘out of control’

The Browns were in fact slow to assess blame and enforce accountability during the 1-31 stretch. How else to explain how Hue Jackson got a third year?

The extensive analytics-driven roster tear down and rebuild was a mitigating factor for the Haslams, coloring their assessment of Jackson’s tenure. The rest was the Haslams letting Jackson snow them.

Kevin Stefanski inherits a much more talented roster. Unless Paul DePodesta and Berry convince ownership another major roster correction is necessary and draft pick accumulation follows, winning now (or at least soon) is the expectation. Just as it is in other analytics-driven organizations across the NFL.

The Browns have the head coach DePodesta wanted a year ago. Haslam has sided (for now) with DePodesta a year after putting his trust in experienced “football men.”

If it doesn’t work, all fingers point toward that decision to revamp the front office and ultimately toward DePodesta.

I understand Ron Wolf’s point only to an extent. I mean, when has Jimmy Haslam ever run out of people to blame?

And if the Browns end up regretting his departure, it won’t be the first time they let one get away.

But enough about Kyle Shanahan.

Both groups might well have succeeded given time. This isn’t a football vs. analytics problem that keeps sabotaging the Browns. It’s an ownership problem.

Was his tenure a colossal failure?

Some of the same people making that case looked at the roster Dorsey, Highsmith and Wolf put together a year ago and picked the Browns to go 12-4, 11-5 or 10-6.

So was it a failure then, or just the way it turned out?

Seems a little too easy now to say he botched a roster that clearly underachieved.

And I say that fully agreeing that the offensive line was a Hindenburg of his own creation.

“Obviously I have a relationship with Kevin,” Woods said from the Super Bowl via cleveland.com. “I worked with him in Minnesota for eight years.”

That’s the word I’ve been looking for to describe these changes in Berea. Seamless.

“He is a real unifier of men and people. He galvanized the offense, he put players in positions to make plays and (he) has a great vision for this organization moving forward.”

That last paragraph was John Dorsey speaking after hiring Freddie Kitchens in January 2019.

And then things got stupider.

“He plays the game a different way," Marcus Morris said of Crowder. "He's got a lot of female tendencies on the court, flopping and throwing his head back the entire game. It's a man's game and you just get tired of it.

Come here. Have a seat.

Leave women out of this. This is not anyone’s idea of inclusion.

Not wanting to be part of the kind of nonsense women have watched going back to the schoolyard makes them smart, not soft.

Imagine what he’d have said if he didn’t have the utmost respect.

He has a point. Unless, he’s just working up to saying there aren’t enough dual-sport athletes in the NFL Hall of Fame and the Baseball Hall of Fame.

Jeter was named on all except one ballot. Walker finally made the Hall on his 10th and final try.

Said Walker: “Remember those old 45s that we used to listen to (on the record player) and they had the (hit) song on the A side, and then the song on the B side that you really didn’t know about. I’m the B side!”

Kids, look it up.

Maybe the NFL just thinks he’s as special as he’s always claimed to be.

What terrible thing were they chanting?

Coach K admitted he might’ve misunderstood what the students were chanting so he apologized. Sort of.

“You shouldn't say that.... In the middle of the first half and an ACC game, this isn't some cutesy little thing," he said.

Now if Duke’s students ever find themselves on Coach K’s lawn, I think they know what he wants them to do.

Bradyologists studying his every possible move and the likelihood that he returns to New England for one more run at a Super Bowl have concluded this latest post could mean he is retiring from the NFL.

Or poised to resume his career.

Hope that clears things up.

In a lighthearted (we think) attempt to cover their bases, the students asked for the school to provide barf bags around campus to help deal with hangovers.

“I hate to say this, people were vomiting in their backpacks,” student body president Tiara Floyd told the Kansas City Star about the aftermath of the Kansas City Royals World Series win in 2015. “That is a health issue.”

Behind getting drunk enough to vomit anywhere.

So what to do with that?

She has a success rate of 50% in picking Super Bowl winners.

Elsewhere in the zoo, the lion exhibit favored the Chiefs while the cheetahs weighed in for San Francisco.

It’s almost as if these annual animal Super Bowl picks are totally random and can’t be counted on when placing a wager.