The rest of the Cleveland Browns season is all about Baker Mayfield: Bud Shaw’s Sports Spin

Hopes for the playoffs in 2019 were built on how well Baker Mayfield played as a rookie. His regression has curbed the enthusiasm.

But it’s really all that’s left to say when your team has underachieved and brings a four-game losing streak into the first week of November.

The clear residual effect of a poor first half is that the Browns have put themselves in a position where even playing better but losing one close game will pretty much end their playoff hopes.

Going by my Twitter feed, some of you can’t fathom this Browns team finishing the season 7-1 or 8-0, being, you know, realistic and all.

That’s a little extreme. But if you no longer believe the playoffs are possible and therefore want another measuring stick for the next eight games, there’s always Baker Mayfield.

Assuming you didn’t lose hope in him by August, too.

The second half isn’t all about Mayfield. Just 95% of it.

If you think the Browns can still contend for the division or a wild card, he’ll be required to play much better for that to happen.

If you think this season was always going to be about growing pains and that the playoffs in 2020 were always a more reasonable carrot, he’ll be required to play much better for that argument to hold and those hopes to take wing.

Mayfield’s numbers in the red zone are almost the polar opposite of the good work he did there a year ago.

Even if you believe that’s all coaching, wait, there’s more. His numbers in a clean pocket aren’t much better.

Is that alarming? Or simply part of a young quarterback’s growth chart? That’s the argument John Dorsey made two losses ago.

“I told you in the spring, to master the quarterback position is very hard,” Dorsey said at his bye week press conference. “You just can’t go up and show up and do it. There is a lot involved in this. He is in his second year.

“Right now, defensive coordinators have probably thrown different looks that he has not seen. Baker is one of those guys that he is smart enough that he is not going to make the same mistake twice… I like where he is. I like his competitiveness. I love everything about him. “

You can’t lead the league in interceptions without at least repeating some mistakes. Still, the Browns should not be re-thinking their commitment to Mayfield.

You don’t have to love everything about him to believe he is still the answer to a 25-year quarterback search.

Wanting to see more proof of that in the next eight games, though, is certainly a reasonable request. (After all, we’re told the schedule gets easier, right?)

A more reasonable request than asking this team to forget a first half filled with mistakes, penalties and poor coaching, and suddenly turn in a convincing impersonation of a playoff team. 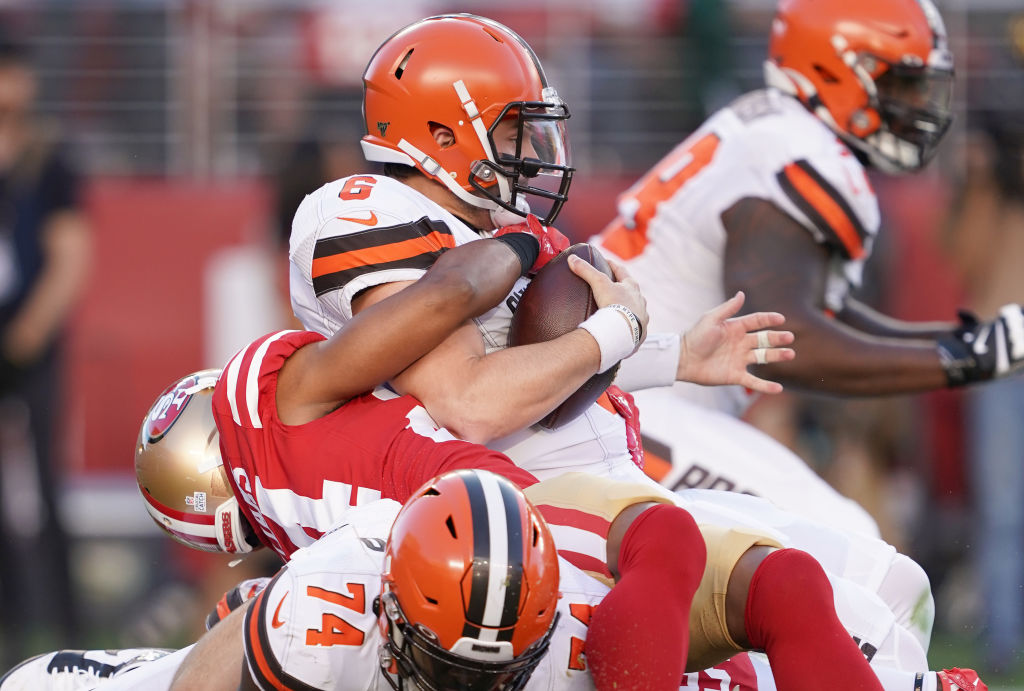 NFL: 3 Ways Browns QB Baker Mayfield Has Regressed in 2019
The Cleveland Browns have been the most disappointing team in the NFL to start the season. After setting hopes high with the acquisitions of Odell Beckham Jr. and Jarvis Landry, quarterback Baker Mayfield and company have underachieved.

The Browns and Falcons are a combined 3-13. Hence the need for short memories.

It’s not too much to expect these two teams to turn it completely around with this new-found attitude and go 13-3 in the second half, unless you’ve been watching them play.

What a relief to know some serious thought went into it.

RELATED: Odds set for what facial hair Baker Mayfield will wear vs. Bills

Disappointing those who consider Kitchens an arbiter of style, I suppose.

That could allow Gordon to do what he does best — run routes like the MetLife cat.

So there’s a clear distinction between Trubisky and Mayfield, who is having a forgettable second season.

"Trying to get some of these TVs in the building turned off because you've got too many people talking on TV about us and what they think about us -- what we should do, what we are and what we're not," Trubisky told the Bears media Wednesday. "But they don't really know who we are, or what we're capable of as people, or what we're going through, or what we're thinking. It's just the outside viewers looking in."

Somewhere, Stephen A. Smith is laughing at Trubisky, secure in the knowledge he can be heard across the country even when the TV is off.

RELATED: What will Kareem Hunt's role with the Cleveland Browns be?