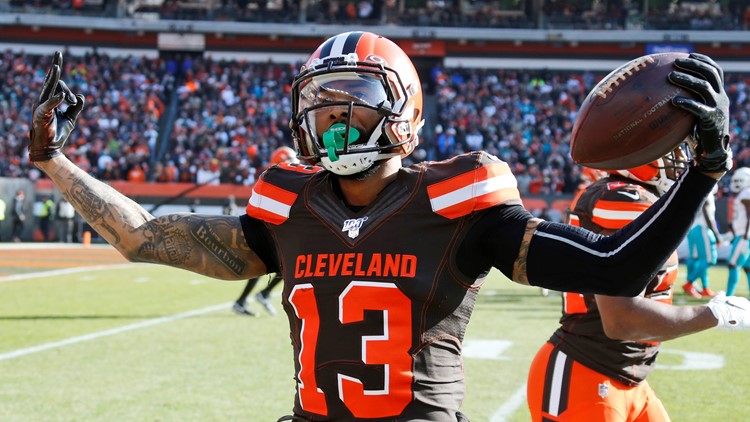 Photo by: Ron Schwane/AP
Cleveland Browns wide receiver Odell Beckham Jr. celebrates after a 35-yard touchdown during the first half of a game against the Miami Dolphins at FirstEnergy Stadium in Cleveland on Sunday, November 24, 2019.

CLEVELAND — Everyone should have somebody who looks at troubling stories about them and spins it on their behalf the way Jarvis Landry did for Odell Beckham Jr. this week.

“He has responsibility to himself, to all of us to go out there and compete each and every Sunday. And he does that. So I don’t think — he doesn’t want to leave, and he’s not trying to leave.”

Landry said Beckham has a “voice” in the organization. But the question is whether he’s using that voice to tell opposing players he’d like to join them, as Jay Glazer’s Sunday Fox Sports report claimed and an October video of Beckham talking with Niners QB Jimmy Garoppolo might suggest.

RELATED: Baker Mayfield: I’ve had conversations I needed to within Cleveland Browns’ building

Four out of five audiologists believe that’s a terrible look.

Glossed over by his friend, Landry, whose words are only comforting in the absence of Beckham being so bothered by the reports that he denies them himself.

“I trust him wholeheartedly,” Mayfield said of Beckham.

Or at least more than he trusted another Junior, Duke Johnson.

Down the stretch, they did it without Tristan Thompson who argued with head coach John Beilein during a timeout and spent the rest of the game on the bench, Larry Nance Jr. replacing him.

“Larry came in and did a really good job,” Beilein said when asked about the exchange with Thompson. “We thought last night that Larry should have played more. So we decided to go with Larry. And that group did a really good job together. Larry was giving us everything that Tristan gives us.”

Translation: I’m still the head coach. I control playing time and, with this being the NBA, not much else.

That would sound ominous if this wasn’t the case involving good players and big markets pretty much every December and January.

If I were the Dodgers I’d ask about Lindor, too. And if I were the Indians looking at the Dodgers talented farm system I’d ask for its top three prospects and the moon, too.

That’s not nearly as powerful as “You know everything there is to know” but I’m sure that’s what he meant, right?

That’s closer to a MRI.

2) Imagine the Patriots trying to get an edge by any means necessary.

Per The Athletic’s Mike Sando, it was the fifth time this season the Ravens have scored 40-plus points after managing it only 14 times previously.

Beginning in 1996, as every single Browns fan might remember.

Bell, who missed practice Thursday and Friday, instead went bowling with family and friends Saturday.

Thanks a lot, said everybody in the bowling alley who decided to wear a sweatshirt and jeans instead of their Haz Mat suits.

Hopefully with his own ball.

“I certainly understand fans asking questions,” Payton said on his weekly WWL radio appearance. “I got the guy at freaking Whole Foods asking me about the two-point play.

"The guy from the meat section. I looked at him and said, ‘Hey, your steaks don’t look too good right now. Worry about your meat.’ Driving me crazy.’”

Le’Veon Bell is surprised he rolled a 251 coming off the flu.

I’m surprised I got to transcribe the line “worry about your meat” in a NFL story before I quit the business.

Also, that the exchange didn’t happen in Cleveland.

With Freddie Kitchens wearing a PETA t-shirt to the deli counter.

According to reports, quarterback Carson Wentz told his offense to “keep believing” in the 23-17 overtime victory.

An unnecessary thing to say when you’re playing the Giants.

A suggestion: the highlight reel probably shouldn’t include owner Jerry Jones talking to the media on a weekly basis about whether he’s going to fire Jason Garrett.

In case you didn’t remember, and you likely didn’t.

They have clinched their 17th consecutive season with a winning record.

If ever there was a team that should be boo proof, it’s the Pats.

I mean that’s impressive even while cheating.