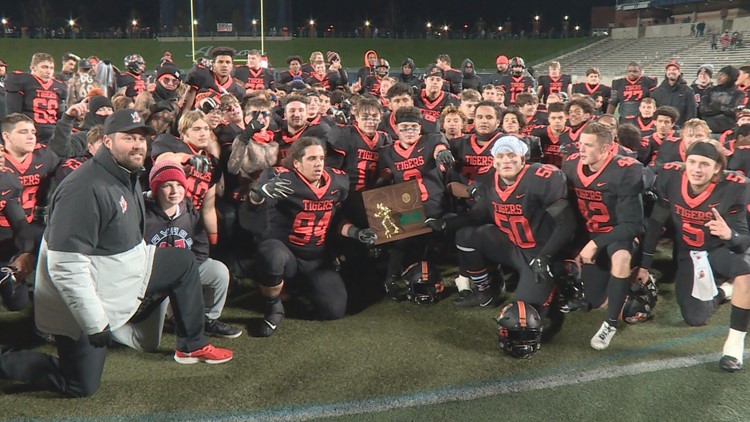 This year, four local teams have made it to the final football weekend in Canton. Only one of last year's winners will get a chance to defend their title, while the rest are either looking to end long championship droughts or reach the mountaintop for the first time in school history.

Let's take a look at who will be playing at Tom Benson Hall of Fame Stadium.

Is this finally the team of destiny Massillon has been waiting for? The Tigers have won 24 state championships in their illustrious history, but none since 1970, and are 0-5 in title games in the playoff era including last season's loss to Hoban.

The black and orange have steamrolled through most of their schedule, with the only true close call coming in the regional finals against those very same Knights. The stars are aplenty, including quarterback and leader Aidan Longwell, speedy junior receivers Jaydan Ballard (an Ohio State commit) and Andrew Wilson-Lamp, and safety Luke Murphy.

Massillon will face La Salle out of Cincinnati Thursday night at 7 p.m. The Lancers won three state titles in a row from 2014-16.

1941 was the last (and only) time Mansfield won a state title in football. No only was that before even the advent of the polling system, but they shared it with two other schools.

The Tygers have had to gut it out this postseason, edging Sandusky 15-9 in overtime for the regional championship before upsetting unbeaten Aurora 27-21 in double OT to get to Canton. The star of the team is Michigan State commit Angelo Grose, who doubles as both the starting running back and arguably the best cornerback in the state of Ohio.

Mansfield will battle Trotwood-Madison Friday afternoon at 3 p.m. The Rams won their most recent of two state titles in 2017.

Tiger Laverde's bunch seems to just re-load every year, and his latest bunch is led by the running back tandem of Mason Sullivan and Luke Gardner along with talented corner Joey Grazia. Overall, they have won 29 straight games.

Kirtland will play Ironton Saturday night at 8 p.m. The Fighting Tigers are searching for their first state title since 1989.

RELATED: Ironton forced to refund $8,000 in donations meant to get marching band to state title game against Kirtland

When one thinks of football in Northeast Ohio, one likely does not think of Lucas, a tiny community of about 600 in Richland County. However, this team is putting the village on the map in a big way.

The Cubs have lived on the edge during these playoffs, squeaking past upstart McDonald 21-20 in overtime in the first round before upsetting well-established Cuyahoga Heights 21-13 for the regional title. In last week's state semis, they needed some last-minute heroics again, and got them when Logan Niswander hit tight end Riley Mounts for a touchdown to give them a 15-12 win over Harvest Prep.

Lucas will battle powerful Marion Local Saturday morning at 11 a.m. The Flyers have won 10 state championships in their history, while the Cubs have yet to win even one.