The OHSAA voted unanimously to keep the State Football Championships in Canton and move the state baseball tournament to Akron in 2019. 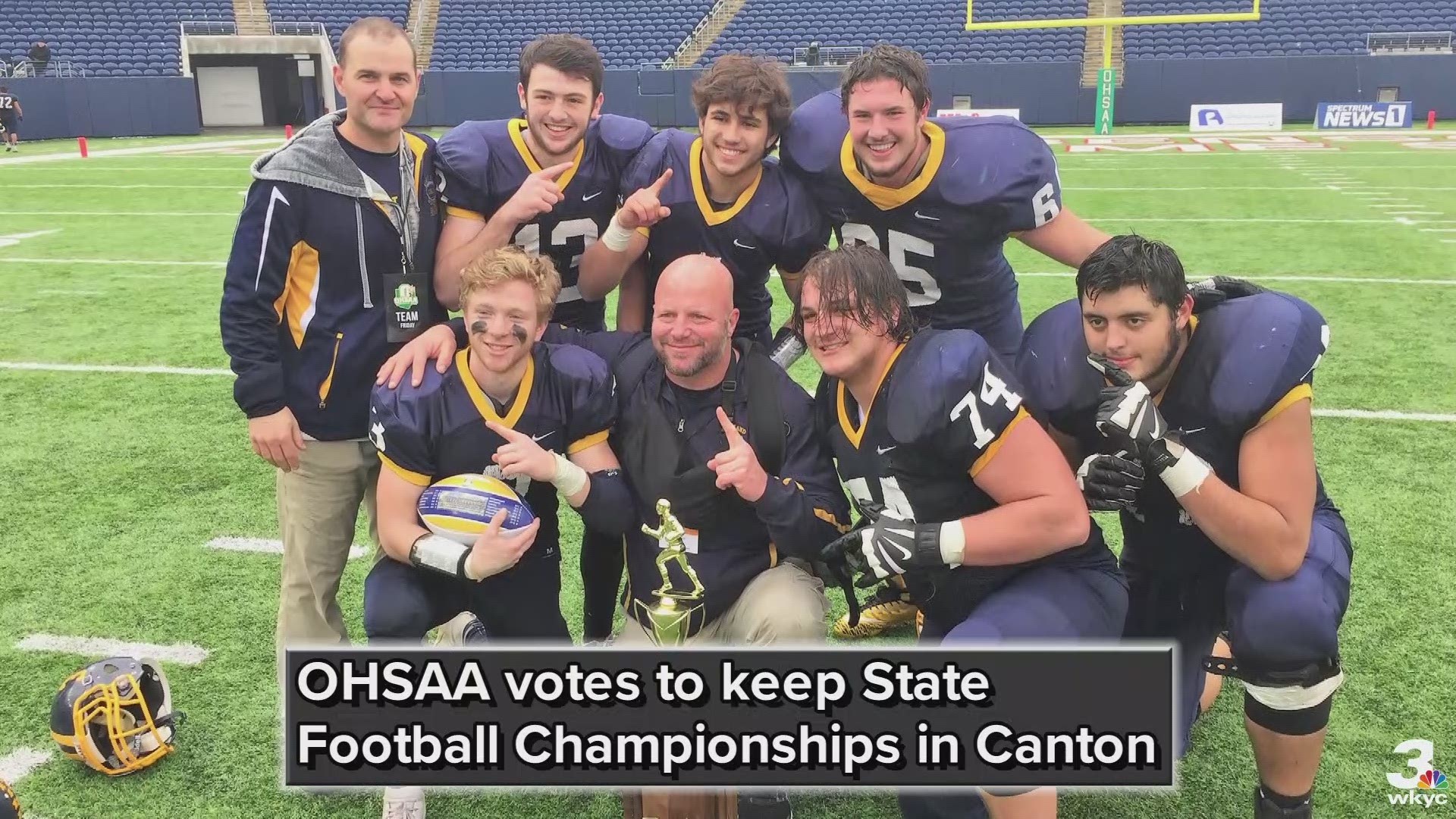 CLEVELAND — The birthplace of football once again will be the destination for every team in the state of Ohio in 2019.

On Thursday, the Ohio High School Athletic Association voted unanimously, 8-0, with one absent member to keep the state football championships at Tom Benson Hall of Fame Stadium at the Pro Football Hall of Fame in Canton.

“We have a great site in Canton for the football finals and we are pleased to return there in December,” OHSAA executive director Jerry Snodgrass said in a release announcing the votes.

“We will continue to talk with Ohio State and the Greater Columbus Sports Commission about hosting in the future, but we wanted to make a decision this winter regarding 2019 and we would need more time to come to an agreement with Columbus. In Stark County, we have great hosts with Visit Canton and the Pro Football Hall of Fame, and we are fortunate to stay there another year.”

Coach Jeff Grubich and the Kenston Bombers celebrate the school's first football championship after a 42-6 win over Kettering Alter in the 2018 Division III State Championship Game at Tom Benson Hall of Fame Stadium in Canton, Ohio.

The state football championships were held in Stark County, split between then-Fawcett Stadium in Canton and Paul Brown Tiger Stadium in Massillon, from 1990 through 2013, and after a three-year run at Ohio Stadium in Columbus (2014-2016), the title games returned to Canton in 2017.

Prior to 1990, the state championships were held at Ohio Stadium in Columbus throughout the 1980s.

In addition to the state football championships returning to Stark County in 2019, the Akron-Canton area got other good news from the OHSAA.

The board voted, 8-0, with one absent vote to move the 2019 OHSAA State Baseball Tournament to Canal Park in Akron. Canal Park is the home of the Eastern League’s Akron Rubber Ducks, the Cleveland Indians’ Double-A affiliate.

Credit: Matt Florjancic
Canal Park in Akron, Ohio, home of the Akron RubberDucks, will have foul-pole-to-foul-pole netting installed before the start of the 2020 season.

Since its opening in 2009, Huntington Park in Columbus has hosted the state baseball tournament, but a scheduling conflict arose when the Clippers, the Indians’ Triple-A affiliate, were given home games during the same weekend as the semifinal and final rounds.

“The Clippers and Huntington Park have been great hosts, but our baseball season is a week later now and it conflicts with the Clippers’ 2019 home schedule,” Snodgrass said. “We looked at many sites, but for several reasons, including similar schedule conflicts at other locations, we believe that Canal Park is the best choice.”