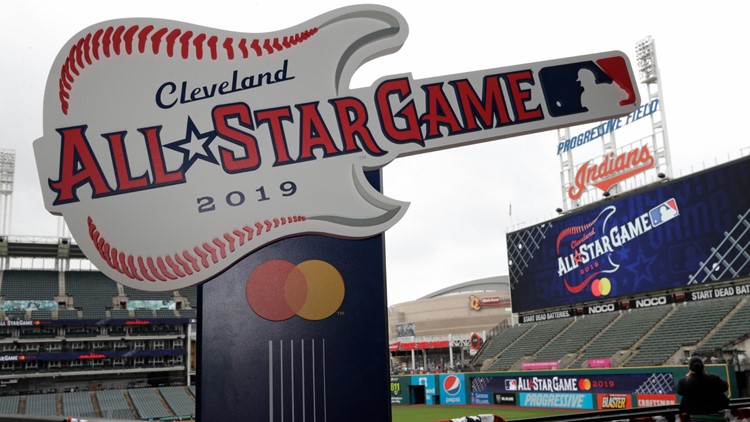 Photo by: AP
The 2019 All-Star Game logo is displayed on the concourse at Progressive Field, Tuesday, Aug. 7, 2018, in Cleveland. Indians took the rock 'n' roll route with a logo for the 2019 All-Star Game that won't offend anyone. The Indians are hosting the event for the sixth time, and next year's game coincides with the 25th anniversary of Progressive Field. (AP Photo/Tony Dejak)

CLEVELAND -- At this point, we still don't know who will be playing in the 2019 MLB All-Star Game when it comes to Cleveland in four weeks.

On Monday, MLBShop.com, Lids.com, Fanatics.com and various online retailers began taking orders on the jerseys, hats and workout hats that will be worn at Progressive Field during the first week of July. The designs of the apparel were first revealed in April and in many ways feature a retro feel, as well as multiple callbacks to Cleveland.

The jerseys are produced by Majestic, while the caps are made by New Era, the official on-field hat of Major League Baseball.

For the first time since 2000, the workout jerseys -- typically worn during batting practice and the Home Run Derby -- will be sleeveless, with the American League donning red jerseys and the National League in navy blue. The batting practice caps for both teams, meanwhile, will be silver, with the American League receiving a red bill and logo with the National League once again in navy.

As for the caps the players will wear during the actual All-Star game, they'll feature a throwback feel, with piping on the sides and across the back. Otherwise, the hats will largely resemble the same caps worn by the players' respective team, with two stars on the front and the All-Star Game patch on the side being the primary differences.

As has become standard, players will wear their traditional team uniforms for the All-Star game, with A.L. teams in white and the N.L. in grey. Each player will also don a special patch on their jersey, which will indicate how many All-Star Games he has been selected to.

Additional All-Star Game gear is also available at the Progressive Field team shop, as well as the All-Star Game pop up shop on the East 9th Street patio near the right field gates.

The 2019 MLB All-Star Game is scheduled to take place at Progressive Field on July 9, with the Home Run Derby and Legends & Celebrity Softball Game occurring the days prior.