Heading into their Friday matchup vs. the Tampa Bay Rays, the Cleveland Indians trail the Minnesota Twins by eight games in the American League Central. 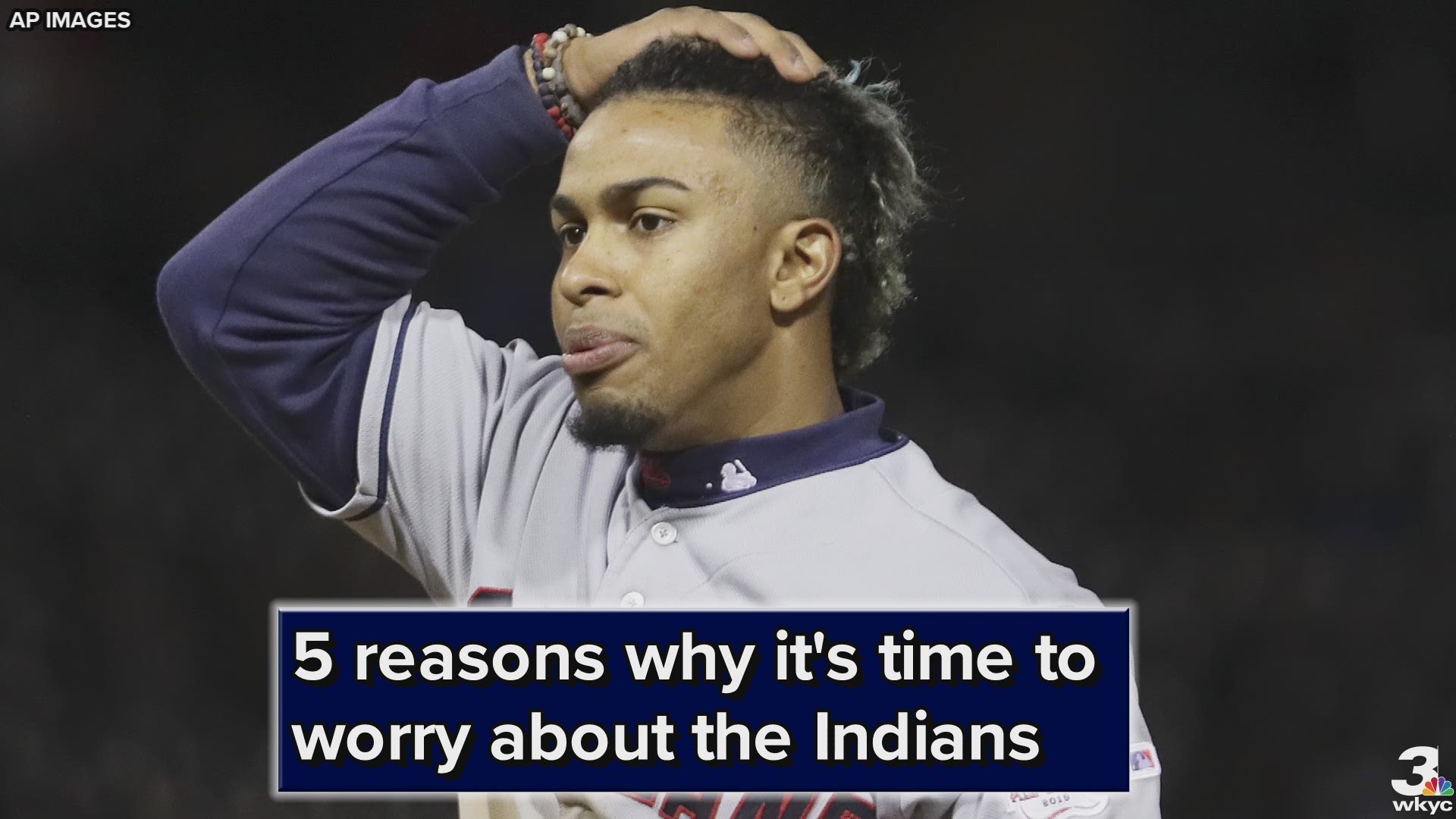 CLEVELAND -- Last week, the Minnesota Twins overtook the Cleveland Indians as the betting favorite in the American League Central.

If you're the wagering type and had an inclination for the Twins, you would have been wise to have placed your bet then.

At the time Minnesota was named the AL Central's new favorite, Cleveland laid claim to a 21-18 record, trailing the Twins by four games in the division. But in the less than two weeks since, Minnesota has seen its division lead blossom to eight games with Bovada currently listing the Twins as a -375 favorite to bring the Indians' three-year reign atop the American League Central to an end.

It may only be May, but Cleveland already finds itself entrenched a hole deeper than any other it's dug in the division in the previous three years. With that in mind, here are five reasons why it's time to worry about the Tribe, which enters Friday night's matchup vs. the Tampa Bay Rays riding a four-game losing streak.

As the Indians watched All-Star outfielder Michael Brantley leave for the Houston Astros in free agency this past offseason, weakening an already weak outfield, Cleveland justified its potentially impotent offense by pointing to the pair of MVP candidates on the left side of its infield.

There's been just one problem; dating back to the second half of last season -- and through the first two months of this season -- Jose Ramirez has hardly held up his end of the bargain.

Credit: AP
Cleveland Indians' Jose Ramirez hits a single during the fourth inning of the team's baseball game against the Miami Marlins, Wednesday, May 1, 2019, in Miami. (AP Photo/Lynne Sladky)

Despite finishing third in American League MVP voting in each of the previous two seasons, Ramirez has hardly provided much pop -- or anything else -- for the Indians lineup. Through 49 games, the All-Star third baseman has compiled a .198 batting average, .300 on-base percentage, 4 home runs and 15 RBIs.

As a result, manager Terry Francona has been forced to drop Ramirez from third to fifth in the Indians' lineup, despite a lack of appealing alternatives.

Meanwhile. the other half of Cleveland's MVP candidate core, Francisco Lindor has shown signs of living up to his lofty expectations with a .286 batting average, 7 home runs and 15 RBIs in 30 games. But the Indians are going to need a lot more from him -- and others -- if Ramirez's near year-long slump is going to continue.

If there was going to be one undisputed strength on the Indians' 2019 roster, it was supposed to be the team's absurd surplus of starting pitching.

But much like Ramirez, that too, has failed to live up to the hype.

After losing Mike Clevinger to an upper back strain following his second start of the season, Cleveland seemed to find a suitable replacement in the form of 25-year-old Jefry Rodriguez. The Indians' depth, however, was once again put to the test when Corey Kluber suffered a fractured forearm earlier this month.

While the jury remains out on Kluber's current replacement, Adam Plutko, Cleveland's pitching problems have been only been amplified by the recent struggles of Trevor Bauer, who had initially looked like an early-season Cy Young candidate. Carlos Carrasco and Shane Bieber, to their credit, have each been solid -- but "solid" is a long way from living up to the billing of the best pitching staff in baseball.

Perhaps the most alarming part of the Indians' underwhelming start to the 2019 season has been the realization that there's no quick fix. The reality is that to a large degree, Cleveland is making this up as it goes -- and thus far, finding disappointing results.

The improvisational nature of the Indians' roster was personified earlier this week, when the team designated veteran outfielder Carlos Gonzalez for assignment, bringing an end to his brief Cleveland career. A day prior, the 33-year-old had been hitting cleanup for the Indians, a spot typically considered prime real estate in a team's lineup.

This wasn't the first experiment Cleveland had conducted on the fly this season, some of which have been successful -- Jordan Luplow and Oscar Mercado both seem promising -- and some not (hello, Hanley Ramirez). The overarching trend of these transactions is that the Indians are still searching for answers, which is far from an ideal place to be as summer quickly approaches.

Credit: Tony Dejak/AP
Cleveland Indians' Carlos Gonzalez watches his ball after hitting a sacrifice fly off Baltimore Orioles starting pitcher Yefry Ramirez in the first inning of a baseball game, Sunday, May 19, 2019, in Cleveland. Jason Kipnis scored on the play.

Perhaps the most alarming part about the Indians already trailing the Twins by eight games in the division is that Cleveland hasn't even faced that stiff of competition yet. In fact, according to TeamRankings.com, the Indians have played the second easiest schedule in all of baseball to this point in the season.

Without having played the likes of the New York Yankees or Boston Red Sox yet, the toughest stretches of Cleveland's schedule remains ahead, including 16 games against the first-place Twins. Of course, that will also provide the Indians' with ample opportunity to gain ground on Minnesota, which is one of the biggest reasons why they can't afford to dig the hole they currently find themselves in much deeper.

While the Indians, in theory, still have a little less than three-fourths of their season remaining to catch the Twins, the reality is that the July 31 trade deadline could loom large. Between now and then, Cleveland is going to have to make an honest assessment of what its championship window is and whether it will be adding or selling at this year's trade deadline.

Should the Indians opt for the latter, that could mean parting ways with key veterans such as Bauer, closer Brad Hand and even Carlos Santana. At this point, it's probably too early to have realistic trade talks involving Lindor this yet. But should it become apparent Cleveland is punting on its playoff hopes, it won't take long for those conversations to occur.

Only complicating matters is that given their current place atop the standings, the Twins will almost assuredly be looking to make a big addition or two between now and July.

For Cleveland, the clock is ticking. And it may not be long before the current worrisome state of the Indians transforms into a full-on panic.