Santana, his wife Brittany, and their daughter Savian spent time with dozens of children to talk baseball and the importance of pursuing one's dreams. 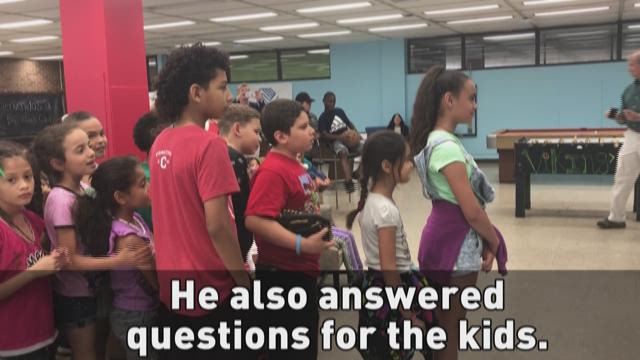 Despite returning to Cleveland at 4 a.m. following a five-game road trip that concluded in Colorado, Cleveland Indians first baseman Carlos Santana paid a visit to the Cleveland Boys and Girls Clubs Thursday afternoon.

Santana, his wife Brittany, and their daughter Savian spent time with dozens of children to talk baseball and the importance of pursuing one's dreams.

Santana told the story of his mother when asked what motivated him to become a professional baseball player.

"Growing up, he used to always give his mother a plate for Mother's Day," said Boys and Girls Clubs Director Gio Sturgis, who translated for Santana. "When he was around 15 or 16 years old, he wasn't able to give it to her. ...His mom said, 'Don't worry about that, I want you to give me a house.'"

Of course, Santana has now been able to give his mother more than just a house.

Santana also answered questions for the children and played ping pong with them before giving every child a book to take home.

Santana will continue his work with the community next month as he hosts a charity bowling event at Corner Alley July 20.

The event will benefit several charities, including Cleveland Clinic, Boys and Girls Clubs of Cleveland and the Cleveland Police Foundation. Click here to learn more.