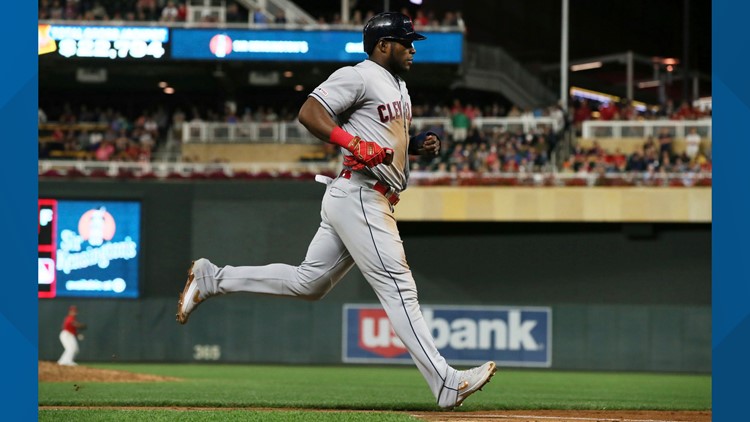 MINNEAPOLIS (AP) — Roberto Pérez hit a two-out RBI single for Cleveland against Minnesota rookie Brusdar Graterol to ignite a four-run 11th inning, as the Indians broke open a critical game against the American League Central leader and beat the Twins 6-2 on Friday night to trim the division lead to 5½ games.

Francisco Lindor drove in another run with an infield single off Graterol, the top pitching prospect for the Twins who was called up last week. Then Oscar Mercado, who tied the game in the eighth by scoring on a one-out sacrifice fly by Yasiel Puig after hitting a leadoff triple off Sergio Romo, tacked on a two-run single against Trevor Hildenberger, the seventh reliever for the Twins after a stellar start by Michael Pineda.

Tyler Clippard (1-0) struck out three of four batters he faced for the victory, and Nick Goody fanned two of three in a perfect 11th to finish it.

The Twins had their "magic number" for clinching the Central stay at 14, meaning any combination of their wins and losses by the Indians reaching that total. The Twins have 21 games remaining, and the Indians have 20 games left. They face each other five more times, including a three-game series in Cleveland next weekend.

After the Indians won three out of four games here in mid-August and took a half-game lead the following day, the Twins have gone 16-7 to retake control of the race. That included an 8-2 road trip they finished on Thursday in Boston, when Eddie Rosario ended a 2-1 win with a one-hop throw to the plate to beat Red Sox runner Rafael Devers after playing a ninth-inning double off the Green Monster in left field.

For all the bad-luck health problems the Indians have been hit with this season and despite losing five of their last seven games, they still entered this weekend with an opportunity to quickly trim the division deficit. They entered the evening one game — and two losses — behind Oakland for the second wild card spot, too. Manager Terry Francona briefly addressed the team after an ugly loss to Chicago on Thursday.

"I just wanted to say, 'Hey, don't leave anything on the field,'" he said.

Pineda compiled a season-high 10 strikeouts over six smooth innings, recovering from a third-inning home run by Lindor and retiring 10 of the last 12 batters he faced. He put quite the exclamation point on his 26th start of 2019, fanning Puig, Jason Kipnis and Franmil Reyes in order in the sixth.

The hulking right-hander, whose 6-foot-7, 280-pound presence in the rotation has been one of the most underappreciated improvements made by the Twins this year, reached double-digit strikeouts for the first time since April 10, 2017, with the New York Yankees. Pineda missed the second half of that season and, after signing with the Twins, all of 2018 while recovering from Tommy John elbow surgery.

Indians starter Adam Plutko was almost as effective, but he wasn't able to keep his one-run lead. In the fourth, an inning that started with a liner by Nelson Cruz that rocketed off the right-hander's right hip, Plutko gave up consecutive two-out hits. C.J. Cron crushed a double that dropped on the warning track to tie the game. Then in the fifth, Jorge Polanco's single put the Twins in front by driving in pinch-runner LaMonte Wade Jr.

The Twins, who broke the all-time major league record for home runs in a season during their road trip, commemorated the feat before the game by bringing two members of the Minneapolis police department bomb squad in full gear to unveil a red trophy resembling a warhead with the details of all 272 homers printed on the sides. Rosario provided the inspiration for the team's "Bomba Squad" nickname earlier this year, using the Spanish word for bomb.

Indians: RHP Jefry Rodriguez was reinstated from the 60-day injured list prior to the game. ... RHP Corey Kluber, whose strained left oblique muscle three weeks ago thwarted his return from a broken right arm, is still limited to aquatic exercises, diminishing his chance to pitch again this season.

Twins: DH Nelson Cruz was removed with a sore left wrist in the 10th, five innings after he grimaced after a swing. Cruz has spent two stints on the injured list with a wrist strain this season. ... Wade replaced RF Jake Cave, who was diagnosed with tightness in his left groin after running out a single. ... RHP Sam Dyson, who with Romo was acquired for a bullpen boost at the trade deadline, had an MRI test that confirmed another bout with biceps tendinitis. ... CF Byron Buxton, limited to pinch running and defensive replacement, is still not close to having his separated left shoulder cleared for hitting, manager Rocco Baldelli said.