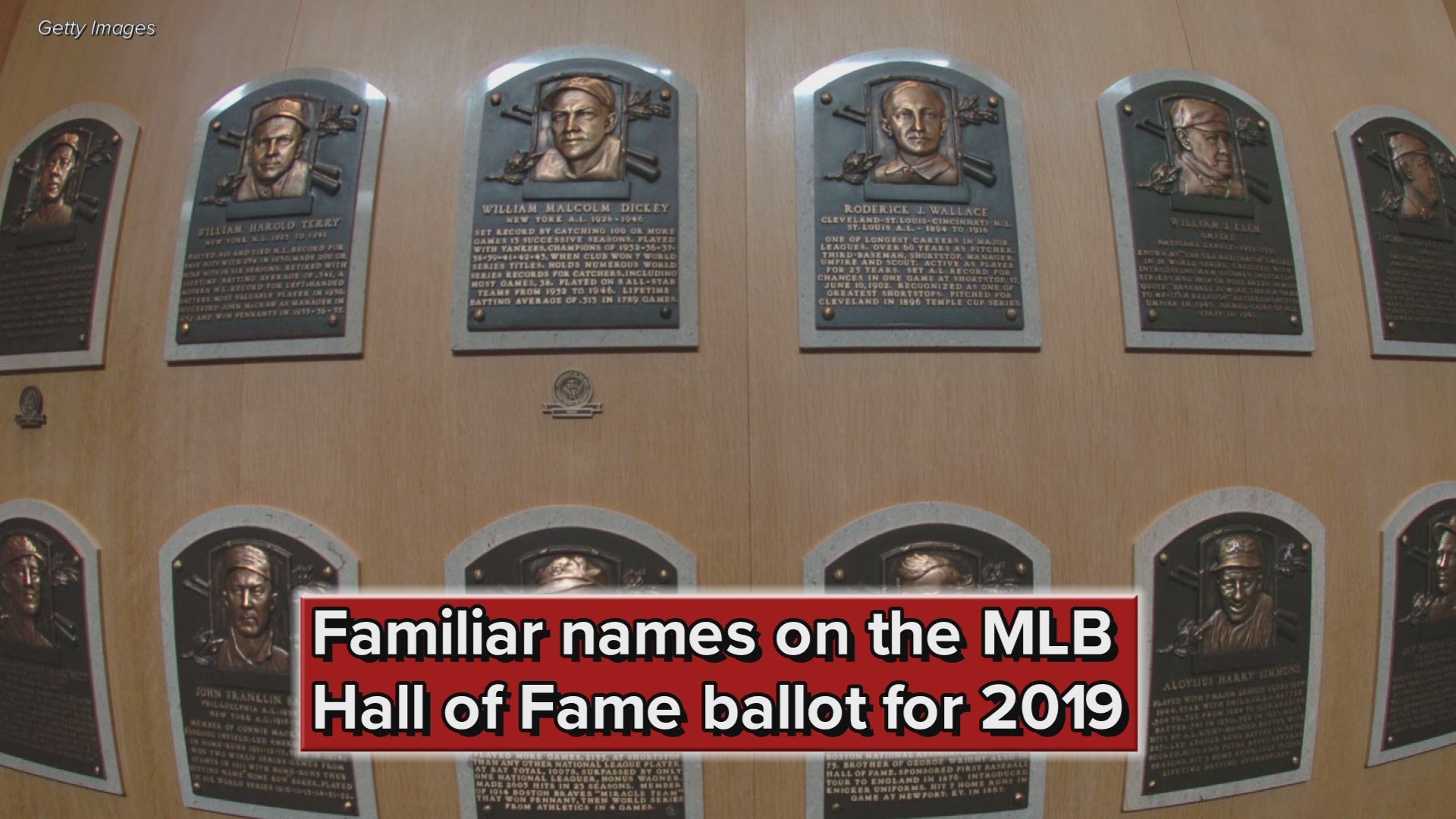 CLEVELAND -- Could slugger Jim Thome be getting some company in the National Baseball Hall of Fame from other former Cleveland Indians?

The Baseball Writers Association of America released the ballot for the 2019 Baseball Hall of Fame Class, and three former Indians, shortstop Omar Vizquel (second year of eligibility), designated hitter Travis Hafner (first year) and outfielder Manny Ramirez (third year), are among those who will be considered for induction.

In his first year of eligibility, Vizquel earned 37 percent of the votes, falling short of the required 75 percent for induction.

Credit: David Maxwell
CLEVELAND - AUGUST 29: Infielder Omar Vizquel #13 of the Cleveland Indians bunts against the Chicago White Sox during the game at Jacobs Field on August 29, 2004 in Cleveland, Ohio. The Indians defeated the White Sox 9-0. (Photo by David Maxwell/Getty Images)

The Indians acquired Vizquel in a trade with the Seattle Mariners after the 1993 season in exchange for first baseman Reggie Jefferson, shortstop Felix Fermin and cash, and the Venezuela native went on to spend the next 11 years making breathtaking barehanded plays in the middle of Cleveland’s infield.

Vizquel won eight straight Gold Glove awards at shortstop and appeared in three All-Star games (1998-1999, 2002) during his time with the Indians.

Although Vizquel was known more for his defensive wizardry than batting prowess, the .283 hitter had a knack for clutch hits and got on base better than 35 percent of the time. Also, he proved willing and able of stretching anything into extra bases, as he stole 279 bases for an Indians team that featured power hitters like Albert Belle, Thome and Ramirez, as well as solid contact hitters in Kenny Lofton and Carlos Baerga.

The soft-handed shortstop carried a .985 fielding percentage, despite having 11,961 defensive chances. He combined with several second basemen, most notably Baerga, a fellow Indians Hall of Famer, and National Baseball Hall of Famer Roberto Alomar, to convert 944 double plays over his 11 years in Cleveland, an average 85.8 per season.

Vizquel won one Gold Glove Award with the Mariners and two more with the San Francisco Giants for a career total of 11.

Credit: David Maxwell
CLEVELAND, OH - SEPTEMBER 4: Casey Kotchman #35 of the Anaheim Angels is forced out at second base as Cleveland Indians shortstop Omar Vizquel #13 completes the double play in the ninth inning on September 4, 2004 at Jacobs Field in Cleveland, Ohio. The Angels defeated the Indians 6-1. (Photo by David Maxwell/Getty Images)

Vizquel finished his career with 2,877 hits, the fifth-most ever by a shortstop. Only Honus Wagner (3,420), former New York Yankees captain Derek Jeter (3,383), Cal Ripken Jr. (3,184) of the Baltimore Orioles and Milwaukee’s Robin Yount (3,142) had more hits as a shortstop, and all but Jeter, who is yet to be eligible, are enshrined in the National Baseball Hall of Fame.

Credit: Jason Miller
Cleveland Indians designated hitter Travis Hafner hits an RBI sacrifice fly during the fifth inning against the Detroit Tigers at Progressive Field in Cleveland, Ohio, on May 22, 2012.

Acquired in a trade with the Texas Rangers in December of 2002, Hafner spent 10 seasons with the Indians, where he belted 200 home runs, 238 doubles and 11 triples. More than 43 percent of Hafner’s 1,039 hits with the Indians went for extra bases.