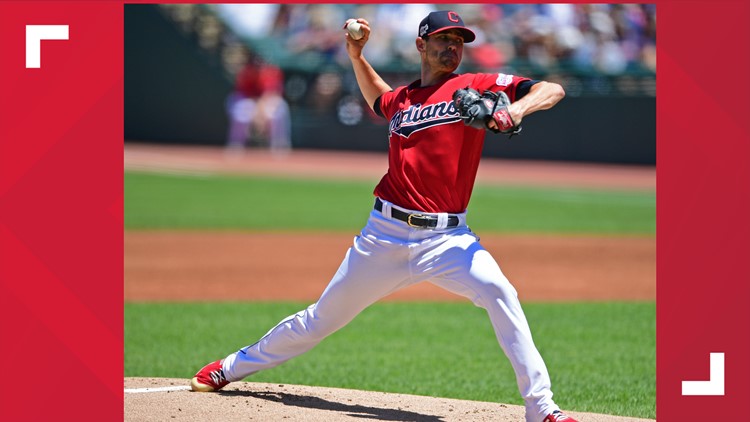 Clevinger (3-2) struck out the side in the first two innings and had nine strikeouts through four — one against each batter in Detroit's lineup. The right-hander was lifted after 100 pitches and allowing one run on six hits in his third double-digit strikeout performance of the season.

Cleveland moved within four games of AL Central-leading Minnesota. It's the closest the Indians have been to first place since May 14. Cleveland has won 10 straight over the Tigers and leads the season series 11-1.

Mercado, who leads AL rookies with a .286 batting average, gave Cleveland a 2-0 lead in the third with a double that scored Mike Freeman and Tyler Naquin.

Nicholas Castellanos scored on an RBI single by Jeimer Candelario to pull Detroit within 2-1 in the sixth.

José Ramírez doubled to lead off the seventh inning, chasing Tigers starter Spencer Turnbull (3-9). With two out, Freeman beat out a bunt single and Ramírez, who had stolen third, scored to make it 3-1 Cleveland.

After Castellanos hit a solo homer in the top of the eighth, the Indians broke the game open with four runs in the bottom of the inning. Pinch-hitter Greg Allen doubled home a pair, All-Star Francisco Lindor homered and Jason Kipnis had an RBI single.

Nick Wittgren worked the final 1 2/3 innings to pick up his second save.

Turnbull lost to the Indians for the fourth time in four starts this season. The right-hander pitched six-plus innings, giving up three runs with three strikeouts. Detroit has lost 23 of 27 games and has not recorded back-to-back wins since May 28-31.

Indians RHP Corey Kluber successfully threw a 20-pitch bullpen session — all fastballs — before the game. It was the first time the two-time AL Cy Young Award winner has thrown from a mound since fracturing his right ulna on May 1 at Miami. Kluber remains several weeks away from potentially beginning a minor league rehabilitation assignment.

Indians rookie RHP Zach Plesac leads the majors with five pickoffs in 48 innings, the most recent Tuesday on Tigers OF Victor Reyes. "Zach has got the quickest feet I've ever seen," manager Terry Francona said. "You're sitting in the dugout thinking, 'This guy is in trouble, only he doesn't know it yet,' because he's going to be picked off."

Tigers: SS Niko Goodrum (right pinky finger) was a late scratch from the lineup after being struck by a grounder during batting practice. X-rays on his bruised finger were negative. 1B Harold Castro was shifted to the spot to replace Goodrum.

Indians: RHP Danny Salazar (right shoulder) reported no physical issues after working three innings Tuesday on a rehab assignment with Double-A Akron. The former AL All-Star could return to the majors next month for the first time since 2017.

Indians: RHP Trevor Bauer (8-7, 3.65 ERA) posted his only career shutout against Detroit on June 16, throwing a four-hitter with eight strikeouts at Comerica Park.