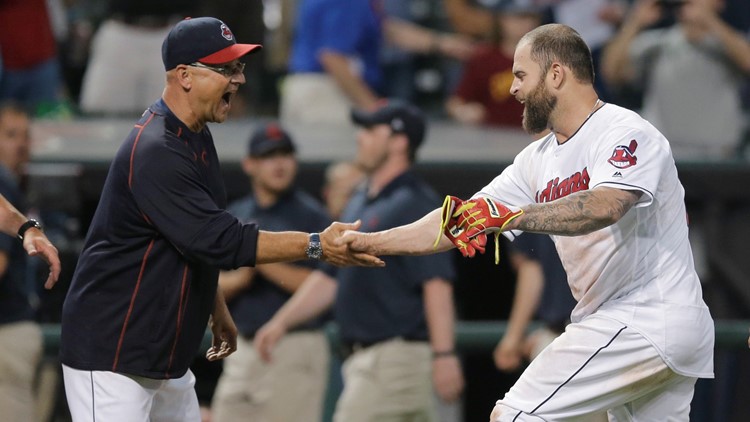 Photo by: Tony Dejak
Cleveland Indians manager Terry Francona, left, congratulates Mike Napoli after Napoli hit a sacrifice fly that scored Francisco Lindor in the ninth inning of a game against the Kansas City Royals at Progressive Field in Cleveland on Thursday, June 2, 2016.

CLEVELAND — Slugging first baseman Mike Napoli spent just one season with the Cleveland Indians, but it was a meaningful one, as he got the chance to play for manager Terry Francona.

“He’s a really genuine person,” Napoli told WKYC at PLAY BALL PARK at the Huntington Convention Center in Cleveland Saturday. “He shows that he cares. He wants you to do good. He knows how to handle people, knows how to handle all of the different personalities, all the stuff that comes at you.”

Cleveland Indians first baseman Mike Napoli, right, waits to bat as he chats with manager Terry Francona, left, during the first inning of a spring-training game against the San Diego Padres in Goodyear, Arizona on Thursday, March 22, 2018.
Ross D. Franklin

During his lone season with the Indians in 2016, Napoli appeared in 150 games, and set a career high with 194 strikeouts, but he had several memorable moments, which added up to 22 doubles, 34 home runs, 101 runs batted in and 133 hits.

Napoli’s games played, hit, home run and RBI totals were single-season career bests, but while there were plenty of personal achievements, there were moments of doubt, too, something which he credits Francona for helping him get through on the way to a World Series appearance.

“You’re going to go through ups and downs throughout the year, but the feel he has, he’s been there before,” Napoli said. “He’s seen everything in the game and is a guy that you can learn a lot from, not just on the baseball field, but as a person off the field.

“He’s such a genuine person and he shows that he cares, so you have no choice but to gravitate toward him. He makes you feel so good. I had a really good year, but there were times during the year that I was struggling, but the confidence he had in me and showed me, it made me feel good. ‘Don’t worry. You’re going to get through this. You’re going to be my No. 4 hitter no matter what. He just knows what to say. He’s been around the game so long. He’s a great friend of mine. We still talk. It was just a really great year for me.”

After suffering a severe knee injury while playing for the Indians’ Triple-A affiliate, the Columbus Clippers, in 2018, Napoli walked away from baseball, at least as a player.

Following a year-long sabbatical in Fort Lauderdale, Florida, where he bought “a bunch of thoroughbred race horses,” Napoli wants to get back into baseball as a coach, even if that means riding the bus in the minor leagues.

“You kind of realize how great you had it in the big leagues, and I was fortunate to be in the big leagues for a while. If it really came down to it, if it was something, I’d love to get on a big-league staff, but sometimes, that’s not possible. I don’t know. I actually did have an interview with the Cubs this offseason. They wanted me to be a first base coach, but I needed that year to take a deep breath. Coaches are there a lot more than players. They put in a lot of time, and it’s tough, so it’s something you’ve got to be committed to.”