"I have never hit or been violent towards my wife." 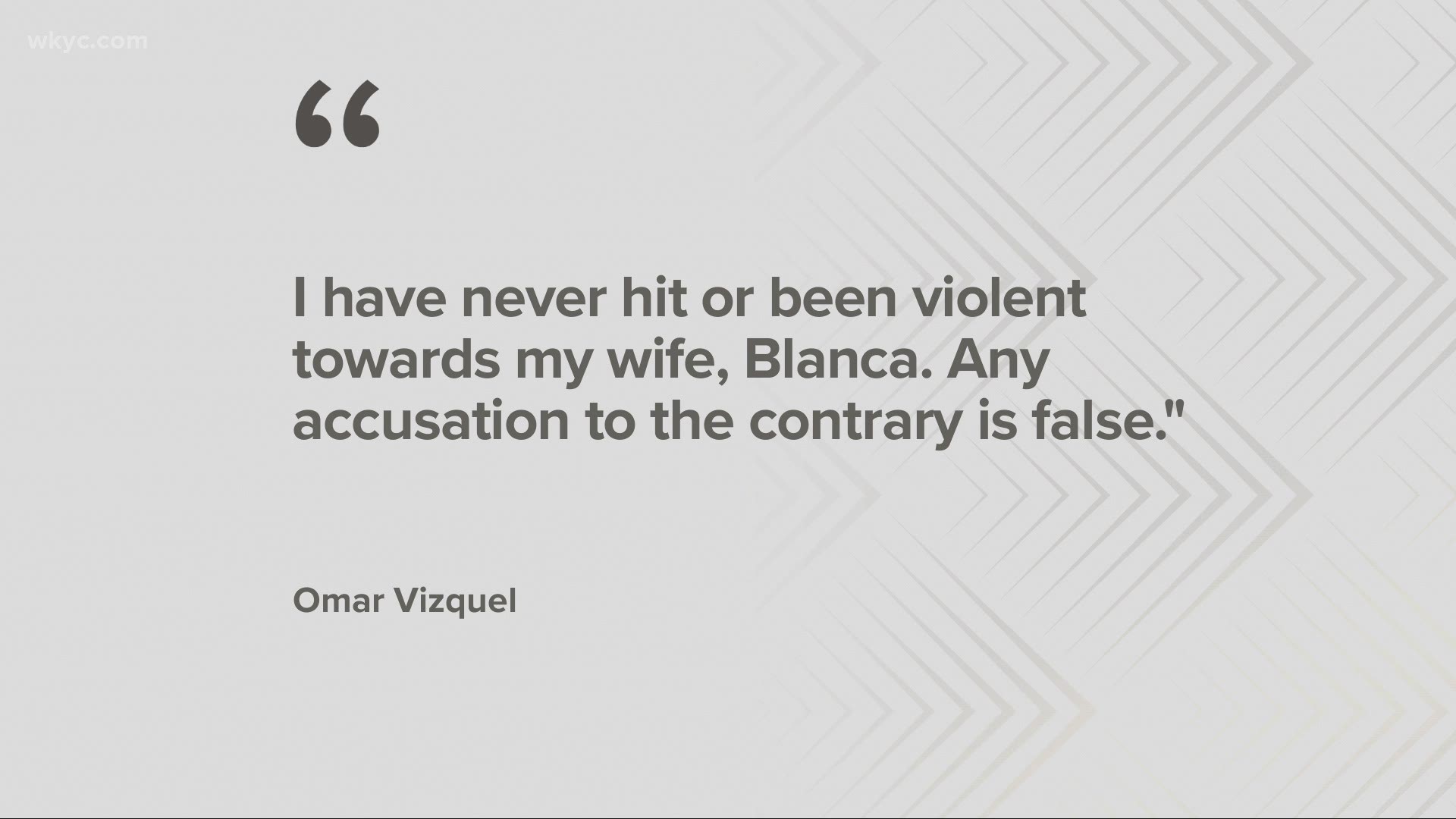 CLEVELAND — Former Cleveland Indians shortstop Omar Vizquel has responded to the allegations of domestic and emotional abuse detailed by his wife in a newly released interview with The Athletic.

In the story written by Ken Rosenthal and Katie Strang, Blanca Vizquel detailed several incidents of domestic and emotional abuse that allegedly took place over a period of a decade and ended only just this year, when Blanca left Omar and headed to a women's shelter before filing for divorce.

"It’s devastating because the person you love is supposed to protect you, and when (he’s) the one who’s hurting you...it’s like slow motion and you’re scared and then the police are there, and you know you can’t take it back," Blanca told the publication.

In a Twitter post sent out on Wednesday evening, Omar Vizquel released a two-page response to the allegations.

In an effort to set the record straight on the ongoing divorce proceedings with my wife, today I issued the following statement. pic.twitter.com/J9DRdpfgw6

"Let me be clear and unequivocal, I have never hit or been violent towards my wife, Blanca," Vizquel wrote in his statement. "Any accusation to the contrary is false."

At least one confrontation in 2016 resulted in Omar being arrested, when Blanca says she and her husband got into an argument that led to him pushing her down. As she fell, she hit her shin on the corner of their bed and broke several nails trying to catch herself.

Blanca claims she then barricaded herself in another room and called a neighbor who later called the police, and Omar was eventually led from the pair's Sammamish, Washington, home in handcuffs and charged with fourth-degree domestic assault. Blanca's injuries were photographed, but the charges were later dropped after she signed a letter expressing a desire to work things out with her husband. She now tells The Athletic she was pressured to sign that note.

In 2011, when Omar and Blanca were visiting her sister Nelly Metler's family in Alabama for the holidays. Metler tells The Athletic she awoke one night to the sound of her sister screaming and later found Omar on top of Blanca and strangling her. Metler added Omar's elbow was on top of Blanca's throat, and that her sister was screaming to be let go.

"He’s not the person that you see," Metler said of Omar, also claiming he constantly belittled Blanca even early in their relationship.

In his statement, Omar Vizquel responded to both incidents. "The two incidents described in The Athletic, one in Alabama in 2011, and one in Washington state in 2016, date back years ago and were either dismissed or closed. Blanca herself asked for the dismissal of the Washington case and both of us asserted to Alabama authorities that the 2011 incident was a verbal dispute over differences in our relationship. Furthermore, I have never asked anyone to remain silent or lie about problems in our relationship."

At the time of the 2016 incident, Omar Vizquel was a first base coach for the Detroit Tigers, and Major League Baseball opened an investigation into what happened in Washington, but merely instructed Vizquel to "cease and desist from any hostile or threatening contact" as part of a "treatment plan." The neighbor who called police alleges he did not speak with league investigators because he feared for Blanca's safety.

The Tigers would not comment to The Athletic on if they knew of the 2011 allegations before they hired Omar to be a coach two years later, nor did they detail any possible knowledge of the 2016 incident.

It wasn't until August of this year that Blanca finally left, walking out of the couple's Arizona home as Omar slept. She later drove 10 hours to a shelter in Texas and began divorce proceedings less that a week later, with Omar apparently freezing her credit cards.

Blanca told The Athletic threats have since been made against her by fans after she spoke about some of the allegations in an Instagram Live video in October. She claimed people accused her of trying to "destroy [Omar] and his career."

"What he did was his choice and it wasn’t mine," she said. "If that’s going to destroy him, I’m sorry; that’s not my intention."

Omar's ex-wife Nicole, who is the mother of his two children and was married to him during his time with the Indians, defended him when reached by The Athletic. She said Vizquel was "never violent" towards her or their kids during or after their marriage.

In his statement, Omar Vizquel does admit to 'infidelities' in his marriage and apologized for the pain his indiscretions may have caused. "Despite this, I made a good faith effort to improve our relationship, including attending extensive marraige therapy sessions during our time together," he wrote.

MLB has since opened another investigation into Omar's behavior, even though he is no longer employed by any organization. Vizquel was fired as manager of the Chicago White Sox's Double-A affiliate Birmingham Barons last year following an unspecified incident with a clubhouse worker, although Vizquel downplayed those allegations as well, saying "nothing happened."

Vizquel said in his statement he will cooperate with Major League Baseball in its investigation.

From a baseball standpoint, the allegations against Vizquel could complicate his case for the Hall of Fame. He is currently in his fourth year on the ballot, and had been considered to be a prime candidate to make it this year after seeing his name on more than 50% of all ballots in 2019 (75% is needed for election). The deadline for sportswriters to cast their votes is Dec. 31.

"I never expected this divorce proceeding to play out in public, but I will continue to defend myself and my name against these false accusations," Vizquel closes in his statement. "Our divorce should be settled in a court of law, not in a court of public opinion."