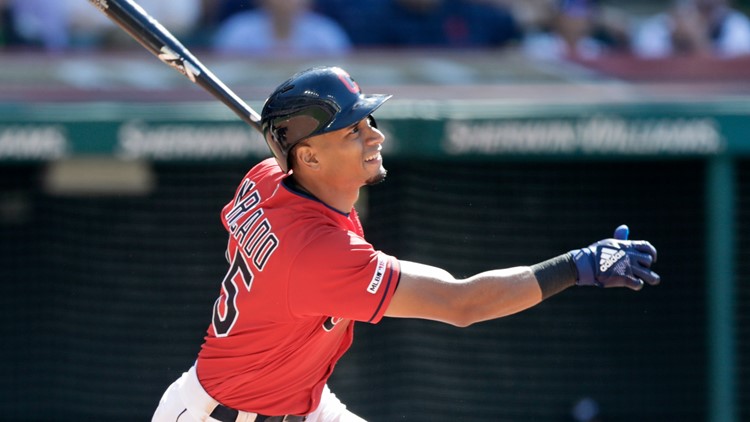 Photo by: AP
Cleveland Indians' Oscar Mercado watches his ball after hitting an RBI-single in the third inning of a baseball game against the Detroit Tigers, Saturday, June 22, 2019, in Cleveland. Mike Freeman scored on the play. (AP Photo/Tony Dejak)

Mercado had an RBI double in the third inning and a run-scoring single in the sixth. He also scored twice.

Mercado is batting .423 (11 for 26) with three home runs and eight RBIs over the last eight games. He was called up from Triple-A Columbus on May 14 and became the 12th Indians rookie since 1913 to have at least five hits in a game.

Shane Bieber (9-3), making his second start since being named MVP of the All-Star Game held at Progressive Field, allowed five runs in 5 2/3 innings.

Bieber took a 6-2 lead into the sixth, but three straight singles with two outs loaded the bases. Whit Merrifield's three-run triple off Nick Goody cut the lead to one.

Cleveland scored four times in the third to erase a 2-1 deficit. Tyler Naquin hit a two-run homer, a towering drive down the right field line that hit close to the top of the foul pole.

José Ramirez drove in two runs and extended his hitting streak to 11 games with an RBI single in the eighth.

Mike Montgomery (1-3) got the loss in his debut for Kansas City after being acquired from the Chicago Cubs for catcher Martin Maldonado on July 15. The left-hander allowed five runs in two innings and was pulled after the first four hitters in the third reached base.

Montgomery went 1-2 in 20 relief appearances for the Cubs, but the Royals will use him as a starter.

Bieber's bases-loaded balk in the first inning scored a run for Kansas City. Jordan Luplow tied the game in the first with an RBI grounder.

Kansas City went ahead in the third on Hunter Dozier's RBI double. Alex Gordon tagged up from third on Humberto Arteaga's fly ball to right and was called safe after avoiding the tag of catcher Roberto Pérez.

Pérez lunged at Gordon, who jumped around the catcher and touched the plate with his hand as he was being tagged. The Indians challenged and the call was overturned.

Royals: SS Adalberto Mondesi has begun rehabilitating his partially dislocated left shoulder. He was injured diving for a foul ball against the White Sox on Tuesday and placed on the 10-day injured list.

Indians: RHP Corey Kluber (broken arm) played catch and did long toss for about 20 minutes. He's scheduled to throw off the mound Sunday for the second time since being struck by a line drive May 1.

RELATED: Cleveland Indians selling ‘I Stand With Cookie’ T-shirts in honor of Carlos Carrasco to raise money for cancer research