The win over the Orioles on September 8, 1995 put the Tribe in the playoffs for the first time since 1954.

There was a time in the history of Cleveland sports when it wasn't a virtual certainty that the Indians would compete for the postseason every year.

If you're old enough, you remember when the Tribe would play in front of a few thousand fans at old Cleveland Municipal Stadium. While it was still enjoyable to take in a ballgame, chances are you weren't going to head home happy.

From 1954 through 1993, the Indians missed the playoffs every year. Most years, the team was eliminated by the time the month of June ended.

In 1994, everything changed. The team moved into a beautiful new ballpark and had put together a core of young, emerging stars to go with veterans who could help guide them to success in a pennant race. Things were going according to plan, until a work stoppage brought things to a halt.

The Cleveland Indians were playing host to the Baltimore Orioles at Jacobs FIeld. The game was being broadcast on NBC as part of "The Baseball Network." The Tribe's record was a ridiculous 86-37 coming into the game, leading the Royals in the American League's Central Division by a whopping 22.5 game margin.

This night would be the chance for the Indians to clinch a berth in the playoffs for the first time since losing the 1954 World Series. All they needed was one victory to be crowned as Central Division Champions.

How did they get to the point of clinching so early? When I think about the Indians of 1995, I think about a team that could beat you in so many ways.

They could bludgeon you with power, as evidenced by Albert Belle's 50 home runs and 50 doubles. You also had future Hall of Famers Eddie Murray and Jim Thome in the lineup, with Dave Winfield sitting on the bench. Not enough punch? Add Carlos Baerga, Manny Ramirez, Sandy Alomar, and Paul Sorrento. There were no soft spots in the batting order.

Want speed? The Indians could beat you on the basepaths with Kenny Lofton and Omar Vizquel at the top of the order. Plus, Wayne Kirby and Alvaro Espinoza were always handy late in games as pinch-runners and defensive replacements.

If you were ahead of the Tribe, it was no comfort whatsoever. The 1995 Indians made it a habit of coming from behind and winning games with dramatic walk-off moments at Jacobs Field. The Tribe and Major League Baseball even made a highlight reel called 'Wahoo: What a Finish," which counted down the top 12 finishes at Jacobs Field that summer.

The list included dramatic walk-off homers by Belle against Lee Smith and Ramirez off of Dennis Eckersley, plus a Sorrento bomb that capped off an eight-run comeback against the Blue Jays.

The Tribe's pitching wasn't sexy, but Dennis Martinez, Orel Hershiser, Charles Nagy, and Ken Hill were all crafty veterans who knew how to keep you in a ballgame. The bullpen was anchored by Jose Mesa, who set a Major League record with 38 consecutive saves.

And you couldn't talk about the 1995 Indians without mentioning the defense. Vizquel and Lofton both won Gold Gloves that year, while Alomar and Tony Pena were top notch when it came to handling the pitching staff.

For many Cleveland sports fans, the 1995 Indians were like a first love. You may go on to have a great love (Cavaliers NBA championship in 2016), but there's something special about the first time you gave your heart to a group of players that you were proud to have represent you. A team that brought joy to a town that was desperate for a winner.

All of that talent and all of that magic put the Indians on the doorstep of history on this date, 25 years ago.

"For a moment all the world was right"

The Indians got all of the run support they would need against the Orioles in the third inning, thanks to a sacrifice fly by Vizquel and a two-run single by Murray.

Hershiser, Paul Assenmacher, Julian Tavarez, and Mesa would make those runs stand up as they held the Orioles to just five hits.

As he had done so many times, Mesa came out of the bullpen gate and took the mound with the Indians leading 3-2. Jose retired future Hall of Famers Cal Ripken and Harold Baines, before walking Chris Hoiles to put the tying run on first. That brought Jeff Huson to the plate.

As stated above, NBC had the game that night so we aired it on WKYC. The Baseball Network would often use the radio or television announcers of the teams playing in the booth for their games. On this night, Indians radio announcer Tom Hamilton was on the call for NBC and uttered the phrase which became one of his trademarks after Huson popped up to Thome at third.

"And the season of dreams has become a reality. Cleveland, you will have an October to remember."

Where were you on this night?

I was watching the game with some of my fraternity brothers at a Buffalo Wild Wings at Bowling Green State University. Because the Indians had been so dominant all season, the significance of clinching the American League's Central Division title hadn't hit me right away. We expected them to do it.

But when you took a few steps back and considered where the franchise had been and how much it had taken to get to this point, I must admit that I got a little emotional. My team was finally going to the playoffs.

There would be plenty more emotions to come on this night.

"Holding you I held everything"

No matter how many times you talk to members of that '95 team all these years later, when you ask what moment stands out the most, chances are they'll say it was September 8 following the win over the Orioles.

Nick Camino and I recently chatted with Kenny Lofton about his fondest memory in a Cleveland Indians uniform. "I'll always say, the opportunity I had to roll up that banner in 1995. That was something that was very special to me. For Cleveland to suffer for those many years and for the team being able to put that banner in that stadium. That's a memory I'll never forget," he said. 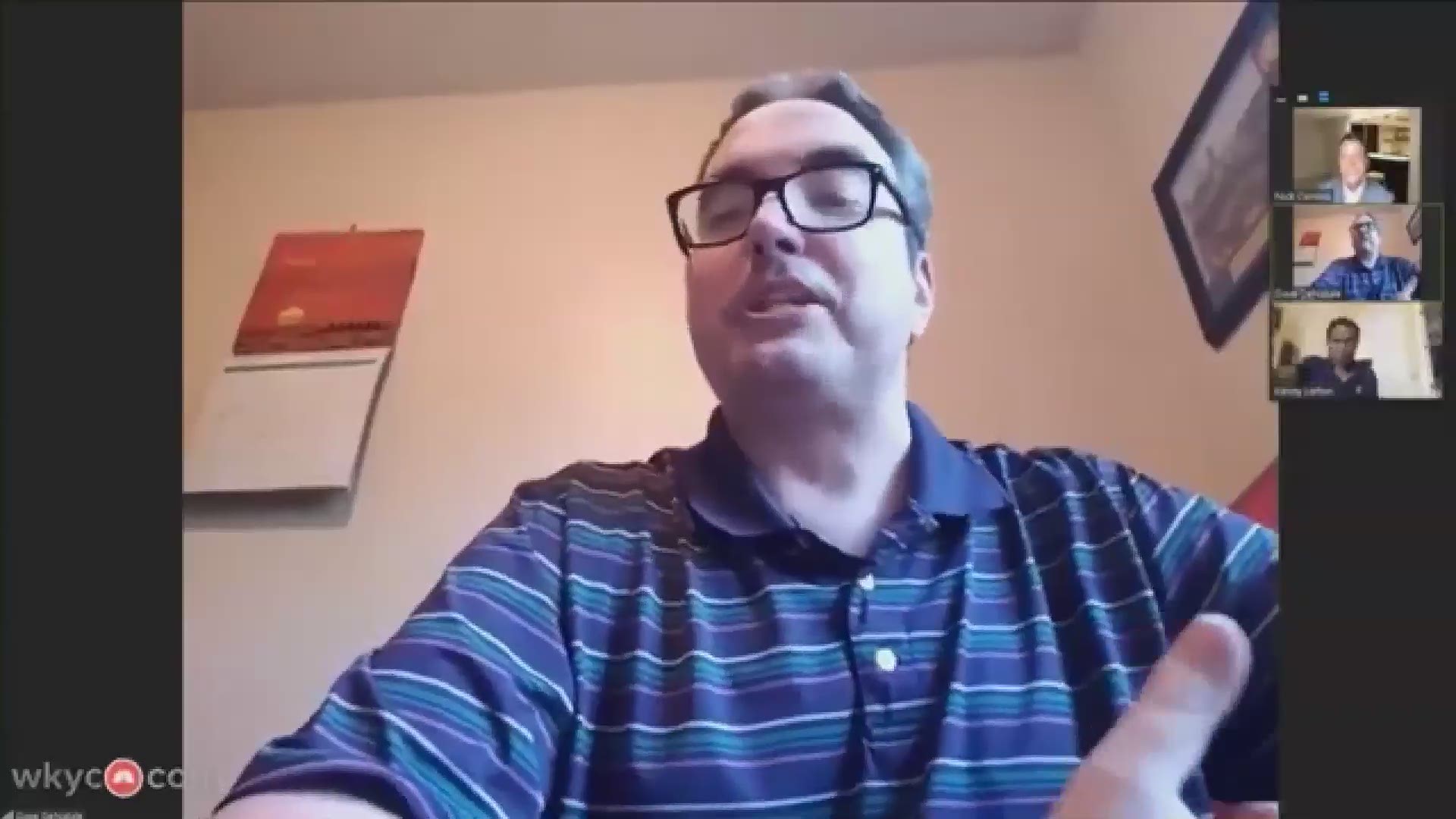 Baerga, Thome, Vizquel, Tavarez, and Alomar have all said similar things to me over the years.

After the Indians finished out the victory over the Orioles and the hugs and high-fives subsided momentarily, the team took a walk out to right field to "hang the banner," as Lofton said. The team would raise the American League Central Divsion Championship flag.

As they began to hoist the flag, an unusual song came over the Jacobs Field loudspeaker. (Cue to about 6:45 in the below video)

I say unusual because Garth Brooks' ballad "The Dance" was not what one would expect to hear in a time of jubilation.

But these were the Cleveland Indians. And it was no ordinary song choice.

"The Dance" was the favorite song of reliever Steve Olin, who along with fellow Tribe pitcher Tim Crews, was killed in a boating accident during Spring Training in 1993.

Manager Mike Hargrove and his wife Sharon had talked before the Orioles game about how best to honor Olin and Crews. It was decided to play "The Dance" when the flag was being hoisted.

"We didn't want to make a big hoop-de-la," Sharon Hargrove told the South Florida Sun Sentinel in 1995, "but we wanted to recognize within the team that Steve and Tim were part of what we were doing, so we played The Dance.

When Brooks performed "The Dance" during his last concert appearance in Cleveland, I teared up a little bit thinking about Olin, the '95 Indians, and what an amazing experience that season had been.

September 8, 1995 would prove to be a historic night for the Cleveland Indians. But it was only the beginning.

The team's first playoff game since losing to the Giants in the 1954 World Series still was ahead. Plus, a date with 'The Big Unit,' along with a return to the Fall Classic.

But that's another story.