"I know Chief Wahoo was an issue, but the name change consideration is going too far." 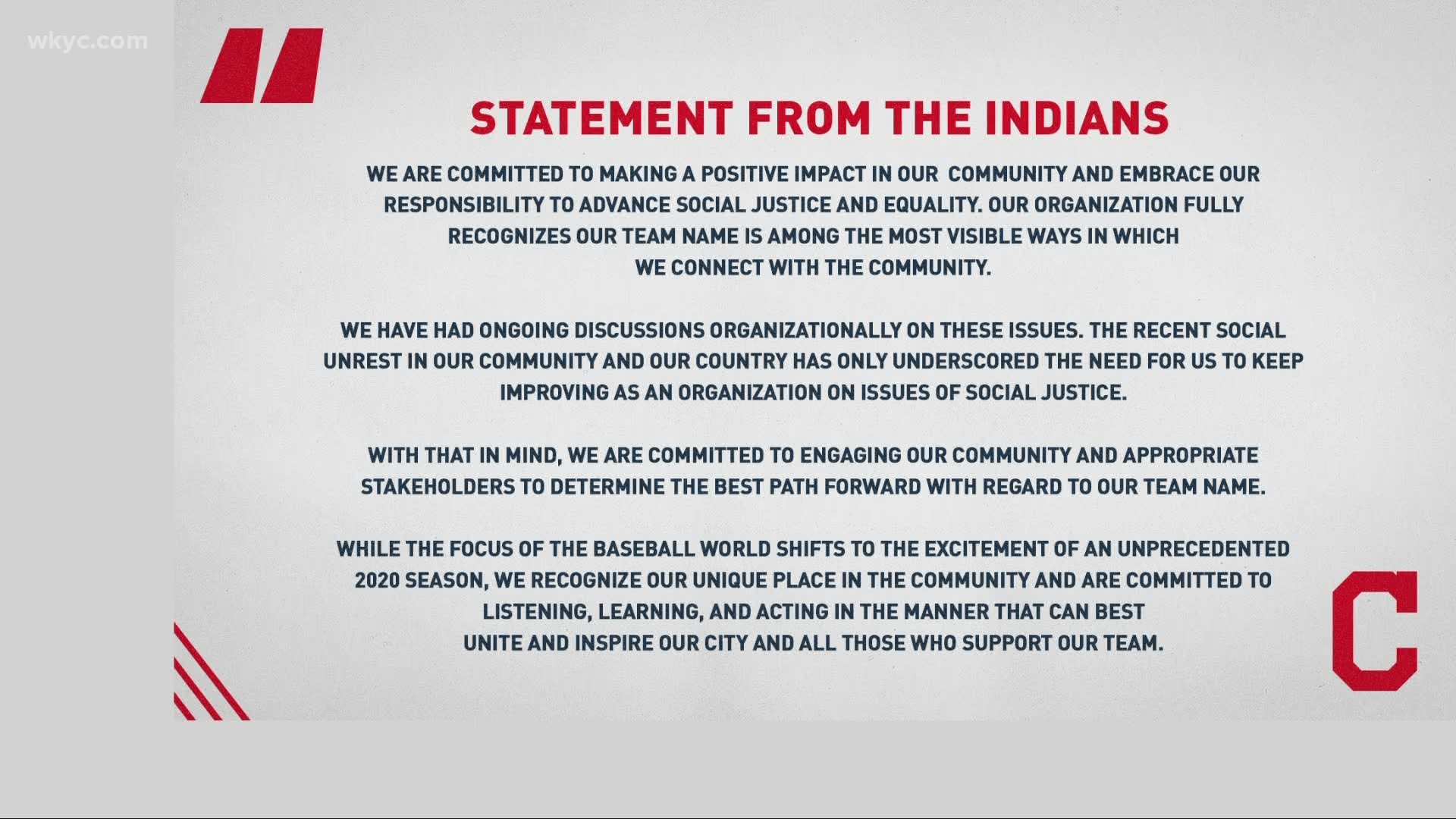 CLEVELAND — The Cleveland Indians may not be the 'Indians' for much longer.

On Friday evening, the team released a statement saying it has begun organizational discussions about the future of the nickname.

RELATED: Cleveland Indians are in 'discussions' about the future of team name

"The recent unrest in our community and our country has only underscored the need for us to keep improving as an organization on issues of social justice. With that in mind, we are committed to engaging our community and appropriate stakeholders to determine the best path forward with regard to our team name," the Tribe said in its statement.

The decision by the Indians to review the future of the nickname comes following a similar move by the NFL's Washington Redskins. Following calls for change from the community, lawmakers, and sponsors, including FedEx and Nike, the Redskins issued a statement Friday announcing a thorough examination of the team's identity.

So how do fans feel about this move by the Indians? Here's a look at what you had to say on social media, starting with Twitter.

Mary Matia -- "So sad that this is even considered. I know Chief Wahoo was an issue because the picture is of a brave not a chief. But the name change consideration is going too far."

Michael Wright -- "It's funny because I currently live in Arizona and many of the Native communities like and wear the Indians apparel. I asked if they have found it to be offensive and everyone said no and they were honored by it. It isnt derogatory. They even liked the Cheif Wahoo logo and wish it would be brought back."

Shelly Eileen Sfiligoj -- "It is time. I love Chief Wahoo but having an American Indian heritage, I understand the need to right our course. Equality for all. Abandon the past’s hateful history and rhetoric."

Andrew Farago -- "I've been through about 35 bad seasons with this team and 10 good or great ones. Last championships were 72 years ago and 100 years ago. Maybe it's time for a fresh start?"

John Byron -- "While this is difficult for some to understand, I can only hope that if a name change comes that it is to their name before Chief Wahoo and Indians. The Cleveland Spiders.."

Ahhh, good segue into my next point. Thank you Mr. Byron.

Cleveland's current Major League Baseball franchise has carried the nickname "Indians" since 1915. Prior to the most recent name change, the city had two National League clubs in the 1800s named the "Forest Citys" and "Spiders." After the current team joined the American League as a charter member in 1901, they were briefly known as the "Blues" and "Bronchos" before adopting the moniker "Naps" from 1903-14 in honor of legendary second baseman Napoleon Lajoie.

So should the Indians go back to one of those former names? Or maybe something different?

(Nice suggestion by Michael. The Buckeyes were the name of Cleveland's Negro League baseball team.)

Chris Lester -- "Cleveland Rocks.. Have the logo and theme be music instruments. Idk something like all those Cleveland Guitar things they put up all around Cleveland years ago. You could keep the colors the same or change them, whatever. It works."

RELATED: Washington's NFL team may finally be changing its name

RELATED: What can fans expect when the Cleveland Indians return to baseball? Your questions answered