Who is Franmil Reyes? Meet the Cleveland Indians' new slugger

On Wednesday, the Cleveland Indians acquired outfielder Franmil Reyes from the San Diego Padres in a three-team trade. 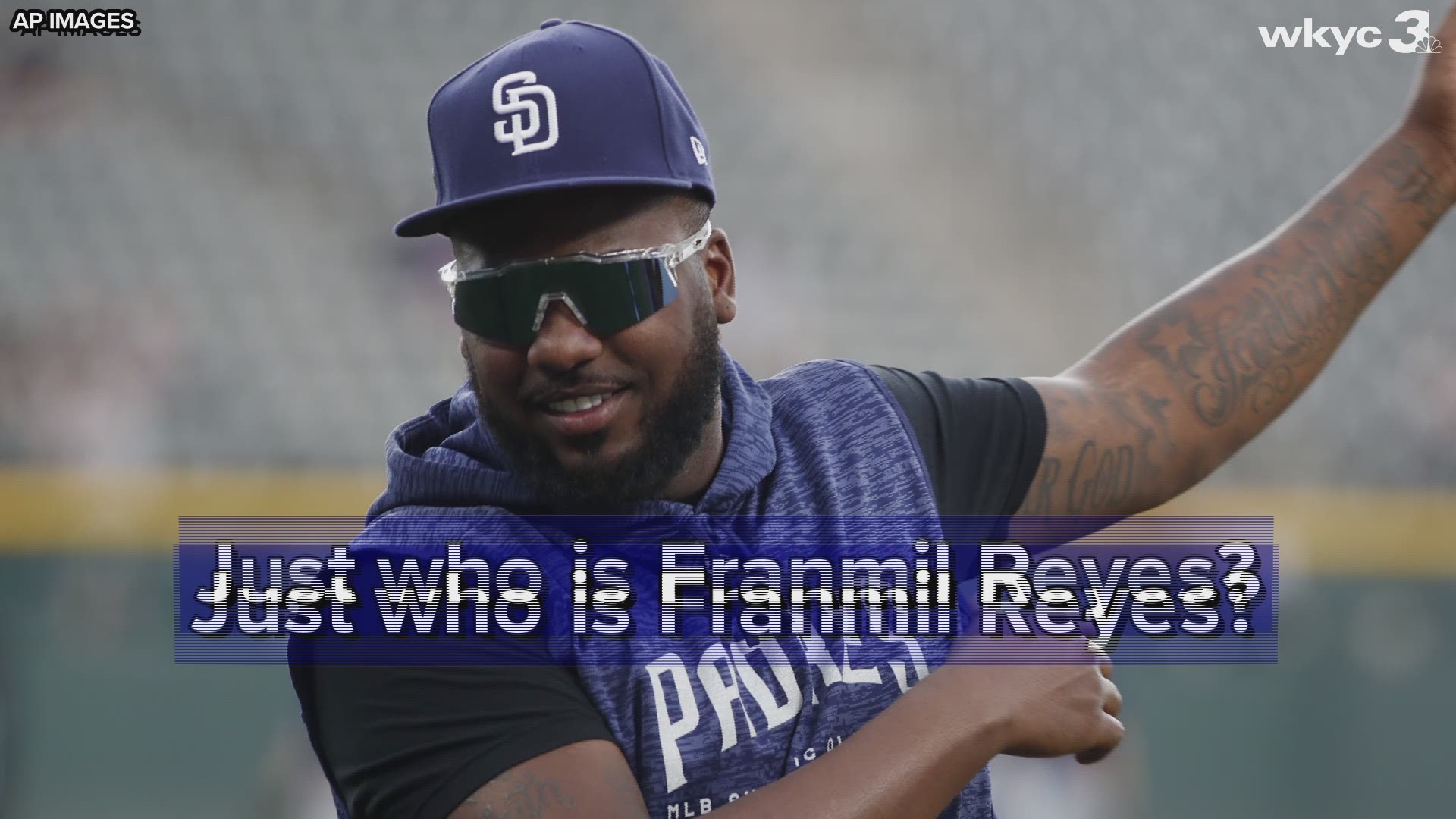 CLEVELAND -- Hours before the 2019 MLB Trade Deadline was set to pass, the Cleveland Indians made a deal.

Agreeing to a three-team trade with the Cincinnati Reds and San Diego Padres, the Indians parted ways with starting pitcher Trevor Bauer and acquired a bevy of players, including former All-Star outfielder Yasiel Puig.

But while Puig may have headlined the Indians' haul, he'll be joined by another sizable slugger who will be counted on to help Cleveland's outfield. In fact, some believe that Franmil Reyes may wind up being the most important piece the Indians acquired on Wednesday, given his ability to contribute both immediately and in the long term.

Want to get more familiar with the lesser-known of Cleveland's two new outfielders? Here's what you need to know about Franmil Reyes:

The third annual MLB Players' Weekend is scheduled for August 23-25 and when it comes, Reyes will likely wear "La Mole" across his back.

A native of the Dominican Republic, Reyes' nickname translates to "The Beast," which seems like a fitting moniker for a player who measures in at 6-foot-5 and 275 pounds.

Like many athletes -- or people, for that matter -- Reyes has several tattoos.

One of them in particular, however, carries a special meaning for not just Reyes, but baseball fans.

As noted by MLB.com's Cut 4 blog, a selfie posted to Twitter last June revealed an interesting tattoo. In addition to the Padres' logo, Reyes had the design of Petco Park inked on his chest, along with the date 5-14-18.

No word yet on whether Reyes will be Progressive Field to his shrine.

Like Puig, Reyes is a hard-hitting, right-handed power bat.

Also like Puig, he's developed a reputation for his eccentric personality.

Need examples? Look no further than the way he belted out Whitney Houston's "I Will Always Love You" following a May win over the Miami Marlins.

“The personality’s bigger than the person, which is saying a lot,” Padres manager Andy Green told The Athletic in June, “because there’s not much bigger than him.”

Credit: AP
FILE - In this June 26, 2019, file photo, San Diego Padres' Franmil Reyes follows through on a two run home run against the Baltimore Orioles in the fifth inning of a baseball game, in Baltimore. The Indians bulked up for the playoff race by trading temperamental starter Trevor Bauer before the deadline to Cincinnati in a three-team deal they hope can help them run down the Minnesota Twins. Cleveland, which trails the AL Central by three games but leads the wild-card race, sent Bauer to the Reds for slugger Yasiel Puig and left-hander Scott Moss. The Indians also acquired outfielder Franmil Reyes, lefty Logan Allen and infield prospect Victor Nova from the San Diego Padres, who acquired outfielder Taylor Trammel from the Reds.(AP Photo/Gail Burton, File)

To the core of the matter

Whereas Puig, who will be a free agent at season's end, will likely wind up as a rental for the Tribe, Reyes possesses the potential to be a piece of the team's new core moving forward.

In addition to his youth, Reyes remains under team control for the foreseeable future. According to Spotrac, he won't be eligible for arbitration until 2022, meaning the earliest he can become a free agent is after the 2024 season.

In essence, Reyes -- who will make a total of $570,500 this season -- will be under team control at a reasonable price for at least the next two seasons, during which time the Indians may attempt to sign him to a longer deal. If the two sides can't come to an agreement, his future arbitration -- as well as several other circumstances -- will dictate his future with the Tribe.

But for now, Cleveland is La Mole's home.