Despite their 19-63 record, the Cleveland Cavaliers still achieved plenty during the 2018-19 NBA season. 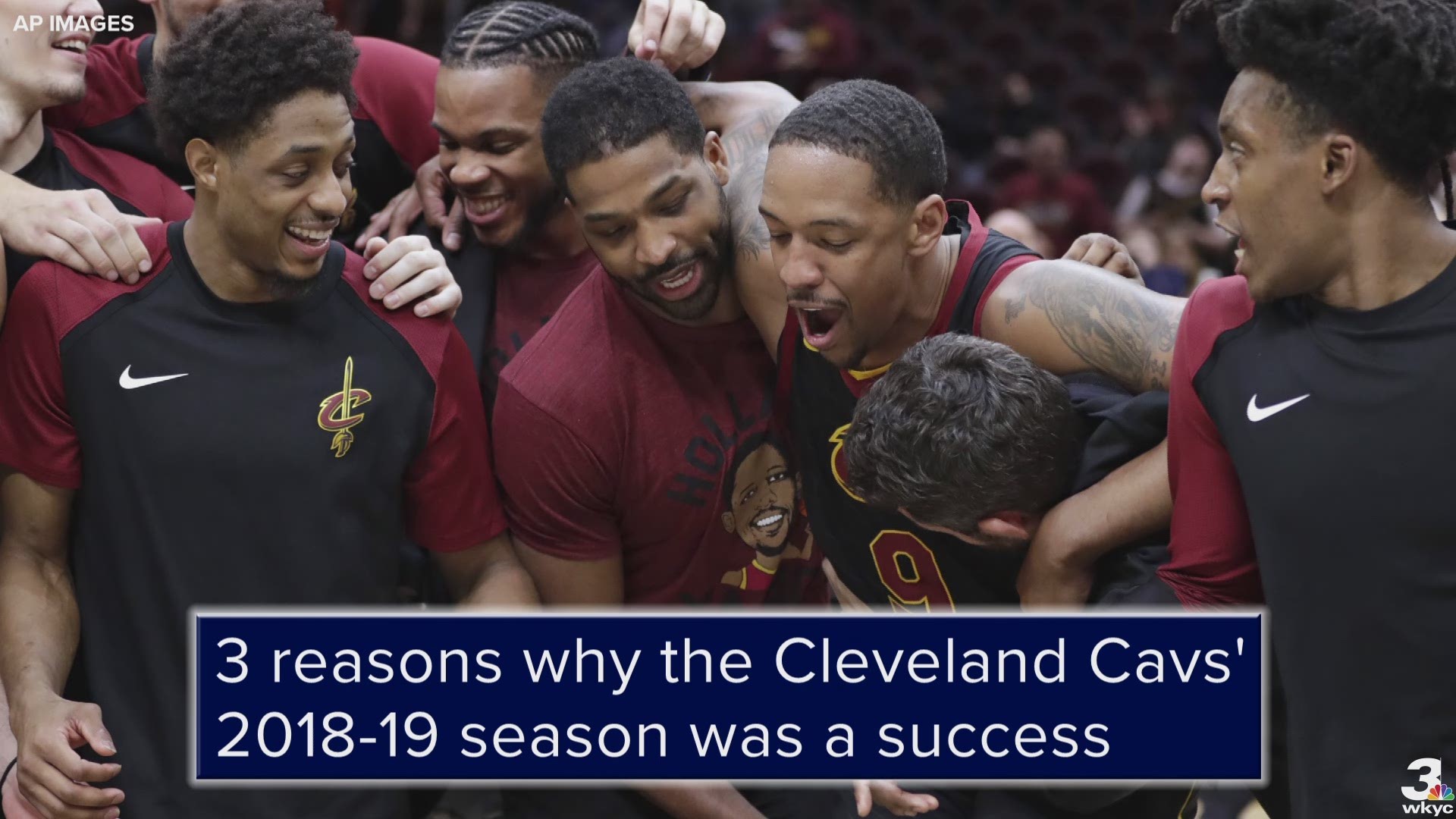 CLEVELAND -- On Tuesday, the Cleveland Cavaliers closed their 2018-19 season with a 124-97 loss to the Charlotte Hornets.

With that, the Cavs put the finishing touches on a 19-63 record -- a mark which tied for the second-worst in the NBA this season and the third-worst in franchise history. Under traditional circumstances, Cleveland's most-recent campaign would have been considered an unmitigated disaster.

This season, however, was far from normal.

After all, of the two organizations who know what it's like to lose LeBron James, the Cavs are the only one to have now experienced it twice. And while the preseason messaging from the team was that it hoped to remain a postseason contender, in reality, it hardly came as a surprise that Cleveland finished with the exact same record this year as it did in its first post-James season eight years ago.

Somewhere between Cleveland's 116-104 loss to the Toronto Raptors in its season opener and the 0-6 start that led to the firing of head coach Tyronn Lue, it became clear that the preseason lip service about remaining a contender was just that.

Foot surgery would cost Kevin Love the better part of the first four months of the season with injuries ultimately limiting Tristan Thompson to a career-low 43 games. J.R. Smith left the team in mid-November and never returned, while Kyle Korver was traded 19 games into the season with point guard George Hill not far behind.

By early-December, the Cavs were relying on -- and sometimes even starting -- G-League call-ups. Perhaps it wasn't that they didn't want to keep contending so much as they simply couldn't.

Fortunately for Cleveland, NBA teams that aren't going to make the playoffs are incentivized to lose in order to obtain the best possible draft lottery odds. That remains especially true in a year like 2019, with many considering the upcoming crop of draft prospects to be top-heavy.

Credit: AP
Murray State's Ja Morant (12) during the first half of a second round men's college basketball game in the NCAA tournament, Saturday, March 23, 2019, in Hartford, Conn. (AP Photo/Jessica Hill)

In order to maximize its chances at landing Duke's Zion Williamson, his teammate R.J. Barrett or Murray State's Ja Morant, Cleveland was going to have to finish with a bottom three record in the league. The Cavs didn't just do that -- they remained in pole position for such stature for the entirety of the season.

With that, the Cavs will have a 52.1 percent chance of landing a top-four pick and a 14 percent chance of landing the No. 1 overall pick in the draft lottery -- the best odds possible under the current format. A drawing will determine whether Cleveland or the Phoenix Suns -- who also finished with a 19-63 record this season -- could fall further should they and the New York Knicks (17-65) all be jumped, with the No. 7 pick being the lowest the Cavs could possibly possess.

Of course, possessing the top lottery odds only guarantees you so much. But for a team that knew its chances of making the playoffs were over by Thanksgiving, Cleveland did as much as it could to give itself the best shot possible at landing a franchise player.

While wins and losses were essentially secondary to the team by Thanksgiving, there came a point where the Cavs were all but unwatchable.

Not only was Cleveland being blown out on a seemingly nightly basis, but the progress of its young talent remained stagnant. The Cavs weren't just losing games -- and lots of them -- they were doing so without providing any incentive for long-term investment as far as their roster was concerned.

That, however, changed after the start of the new year. Although the wins remained sparse, the younger players on Cleveland's roster -- in particular Collin Sexton and Cedi Osman -- began to make significant strides.

The No. 8 pick of the 2018 NBA Draft, Sexton turned what was a disappointing start to his Cavs career into what will likely go down as an All-Rookie season. After averaging 13.3 points on 36.2 percent shooting in January, the Alabama product saw both of those numbers grow over the course of the final three months of the season, including eye-popping averages of 22.4 points on 51 percent shooting (44.7 from 3-point range) in 15 games in March.

While his assist average (3.0 for the season) left something to be desired, Sexton revealed himself to be a potent -- and sometimes even efficient -- scorer with a knack for the big moment. While it's too early to tell what his primary role on an NBA contender would be, the Cavs enter the upcoming offseason with Sexton as the primary piece of their young core -- which is more than they could have counted on mere months ago.

As for Osman, the second-year forward overcame a slow start of his own to ultimately put together a strong first season as a starter for the Cavs. Appearing in 76 games, the 6-foot-8 native of Turkey averaged 13.0 points, 4.7 rebounds and 2.6 assists, including an average of 15.9 points on 52.9 percent shooting (46.7 from 3-point range) between January and February.

Osman's numbers slipped some following the return of Love, but at the very least he showed himself to be a steady small forward capable of shooting streaks that can help catapult a team.

Furthermore, at 24-years-old, he still has room to grow entering his third NBA season and like Sexton, will be considered a core member of the Cavs moving forward.

In addition to finishing with a record identical to the one it possessed eight years ago, another similarity stands out between the Cavs' first and second post-LeBron eras; Even after losing James, Cleveland laid claim to little cap flexibility.

Entering the 2018-19 season, the Cavs' payroll remained bloated with five players making $12.5 million or more -- including Love's $24.1 million and Hill's $19 million salaries. Although Cleveland ultimately dealt the latter to the Milwaukee Bucks, it did so in a trade in which it actually took on more long-term money, with Matthew Dellavedova and John Henson each under contract through 2020.

In doing so, Cleveland provided a glimpse into its long-term plan: Take on money now, add assets -- and most importantly, draft picks -- in the process.

The Cavs did just that in its deal with the Bucks, as well as the trade that sent Korver to the Utah Jazz and the 3-way deal at the trade deadline with the Houston Rockets and Sacramento Kings. Altogether, Cleveland traded away two partially guaranteed contracts (Korver and Hill) and one expiring deal (Alec Burks), bringing back three players with multiple years remaining on their contracts.

For Cavs owner Dan Gilbert and general manager Koby Altman, it was all worth it, given the collection of assets it was able to accumulate after four years of prioritizing the present over the future. In total, Cleveland acquired two first-round picks (Houston's 2019 selection and Milwaukee's 2021 pick), as well as five second-round selections.

Furthermore, the Cavs managed to keep their own top-10 protected first-round pick, which they owe to the Atlanta Hawks and that will convert into two second-round picks if it's not conveyed next year. It's also worth noting they enter the upcoming season with six contracts set to expire in the summer of 2020 -- including Smith's partially guaranteed $15.6 million salary figure.

In other words, don't expect Cleveland's dealings to die down anytime soon.