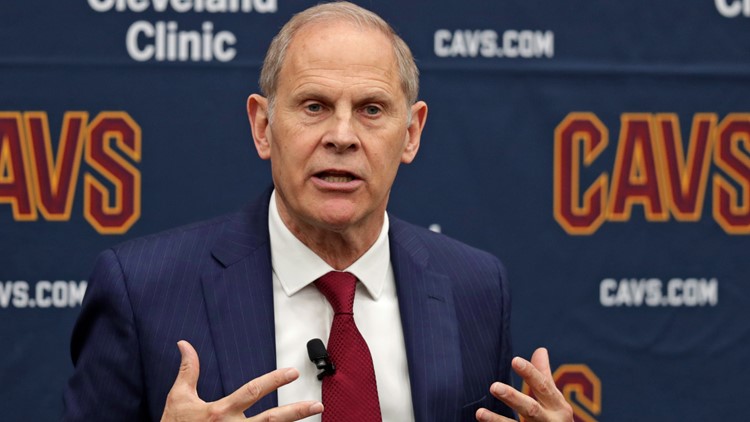 INDEPENDENCE, Ohio — On Monday, the Cleveland Cavaliers will hold their annual media day at Cleveland Clinic Courts in Independence.

With that in mind, let's take a look at the five biggest storylines surrounding the Cavs heading into the unofficial kickoff of their 2019-20 campaign.

For the first time since 2014, the Cavs find themselves entering a season with a new head coach.

And as was the case in 2014 with David Blatt, it happens to be an NBA outsider, as former Michigan coach John Beilein makes the jump to the professional ranks.

Although Beilein possessed no previous NBA experience when Cleveland hired him in May, his resume at the college level speaks for itself. Over the course of 36 seasons, including stints at West Virginia (2002-07) and Michigan (2007-2019), Beilein amassed a 754-150 record, including two Big Ten titles and two national runner-ups during his time with the Wolverines.

Nevertheless, questions remain regarding how the 66-year-old Beilein will fit in the NBA, especially given the state of the franchise he's now at the top of. And on Monday, we'll hear what the Burt, New York, native has learned in the four months since he first made the jump to the pro level.

Cleveland Cavaliers' Tristan Thompson looks for a teammate to pass the ball to in the first half of an NBA basketball game against the Washington Wizards, Saturday, Dec. 8, 2018, in Cleveland. (AP Photo/Tony Dejak)
AP

State of the Franchise

Entering the second season of their second post-LeBron James era, there's plenty of reasons to have optimism about the Cavs entering their new campaign. Adding three first-round picks, Cleveland has bolstered a young core that already included Collin Sexton, Cedi Osman and Larry Nance Jr. And the team should be healthier than it was a season ago, when both Kevin Love and Tristan Thompson missed significant playing time with injuries.

Nevertheless, this is still a team just one season removed from amassing a 19-63 record, which tied for the second-worst in the entire NBA. And as the influx of youth over the offseason likely showed, Cleveland is still in the early stages of a multi-year rebuild.

How much can the Cavs expect to improve this season and how will that improvement be quantified? It will be interesting to see just how realistic both the players and coaches are with themselves about a team that currently lays claim to the second-lowest win total.

Given where the Cavs are at this stage in their rebuild, the reality of their roster is that it will likely look a lot different by season's end.

As a result, don't be surprised if Cleveland is one of the most active teams in the trade market, especially when it comes to veterans like Jordan Clarkson, Brandon Knight, Thompson and Love -- each of whom could conceivably help improve a playoff contender in the coming year.

The biggest name of the group is obviously Love, who has been no stranger to trade rumors since arriving in Cleveland. The 5-time All-Star is entering the first season of a 4-year, $120-million extension, which along with last season's injuries could complicate his trade value.

How will Love, Thompson and others deal with the uncertainty they're facing entering this season? In all likelihood -- at least on Monday -- they'll say all the right things. Nevertheless, the questions about potential trades will be there and it likely won't be the last time they're being asked this season.

Cleveland Cavaliers forward Kevin Love dribbles in the first half of an NBA game against the Los Angeles Clippers at Quicken Loans Arena in Cleveland on Friday, March 22, 2019.
David Dermer

As for the youth on the Cavs roster, there's plenty there. And joining Sexton in the Cleveland backcourt will be rookie point guard Darius Garland, who the Cavs selected with the No. 5 pick in last June's draft.

How Sexton and Garland will mesh will be one of the biggest questions surrounding the Cavs entering the season and it's worth noting that Beilein is no stranger to playing point guards simultaneously. And how Garland will fare in his rookie season is a storyline in and of itself, given that his college career at Vanderbilt was limited to just five games.

Other young players worth keep an eye on include fellow first-round picks Dylan Windler and Kevin Porter Jr. -- the latter of which entered his freshman season as a 5-star prospect. The Cavs may not win a lot of games in the 2019-20 season, but they possess more youthful upside than any other season in recent memory.

Other points of interest at Cavs media day could include: