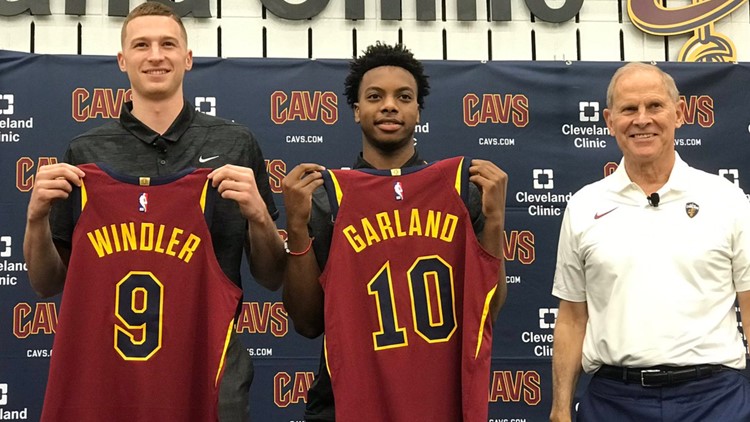 INDEPENDENCE, Ohio -- John Beilein has been here before.

Heading into the fall of 2011, Michigan was coming off a successful season, amassing a 21-14 record and qualifying for what would be the first of four straight NCAA Tournament appearances. A former 3-star prospect, Tim Hardaway Jr. had emerged as one of the team's top players, averaging 13.9 points in his freshman year.

The son of a Hall of Fame point guard, Hardaway was a natural running the show but often went stretches playing off the ball while sharing the Wolverines backcourt with Darius Morris. And he wouldn't get to start at point guard the next year either as future National Player of the Year Trey Burke arrived in Ann Arbor.

None of this was by accident.

As Beilein -- who agreed to become the Cleveland Cavaliers head coach in May -- established himself as one of the nation's top coaches, his offensive system has often featured two ball dominant guards. So perhaps it shouldn't come as a surprise that with the No. 5 pick in the NBA Draft on Thursday night, the Cavs selected Vanderbilt point guard Darius Garland with the No. 5 pick -- a year after taking Alabama point guard Collin Sexton eighth overall.

"It is truly a two-guard front," Beilein said of his offensive system on Friday. "It opens the floor so much for everyone because you can put people in the corners. The court's open and it really allows the guards to have so much more freedom.

"That's the traditional way it is, whether it was back at Michigan, Trey Burke and Tim Hardaway back there or Caris LeVert and Derrick Walton, it was just sort of this open court that really allowed them to have a lot of freedom."

Despite Beilein's track record, some questions still persist regarding how Garland and Sexton will fit on the floor. In particular, there are noticeable similarities between the two in regards to both their skillset and their size (both are listed at 6-foot-2).

Garland, like Sexton, is a potent scorer -- especially from long distance. Although his freshman season was limited to just five games due to injury, the former 5-star prospect shot at an impressive 47.8 percent success rate from 3-point range.

Not necessarily known for his shooting a year ago, Sexton's 40.2 3-point percentage in 82 games was a pleasant surprise in his rookie season and only improved as the season wore on.

Neither, however, is a renowned distributor. Last season, Sexton averaged just 3.0 assists per game, which topped the 2.6 Garland averaged in his limited action as a freshman.

"At the same time, they've got to be very good -- great teammates that see each other, can score for their own, but also find the open shooters," Beilein said.

He then added specifically of Sexton and Garland: "The two of them are going to be beautiful together."

"I'm really excited. Collin, he's really good. And I think that I can help him," Garland said. "I think we can both combine and just do some crazy things in Cleveland."

Given their size -- or lack thereof -- concerns also exist regarding the duo's defensive prowess, something Cavs general manager Koby Altman acknowledged on Thursday night. Despite the optimism surrounding Cleveland's new-look backcourt, there are still questions left to be answered, although if Beilein's system works the way it's supposed to, one of the biggest ones will remain open-ended.

Who's the point guard and who's the shooting guard?

"It doesn't make a difference," Beilein said with a smile and a shrug.