"Everyone is going through something that we can't see," he wrote. 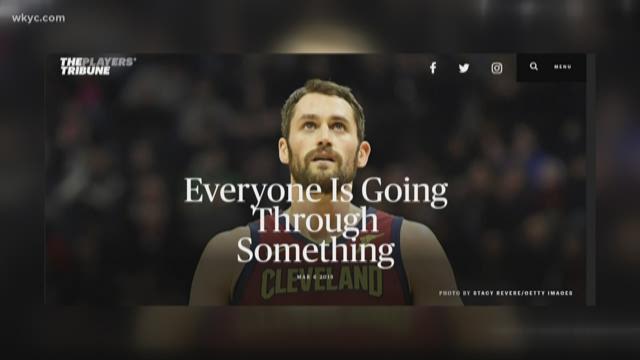 Kevin Love has a successful NBA career, a collaborative deal with Banana Republic and a swimsuit model girlfriend. But the Cleveland Cavaliers forward pointed out Tuesday that everyone faces mental struggles, regardless of their demographics.

Love penned an op-ed for the Players' Tribune titled "Everyone Is Going Through Something," noting he felt inspired by Toronto Raptors guard DeMar DeRozan, who admitted to struggling with depression last week.

Love opened up about mental health, the stigma that plagues those who endure mental health issues and how he's learning to figure out how to manage himself.

"Everyone is going through something that we can't see," he wrote.

Love discussed a game back in November during which he experienced a panic attack, which forced him from the game. He admitted to being fearful that his teammates would find out, but the team found him a therapist.

Love also revealed how losing his grandmother affected him emotionally, and how talking about her has helped him heal since her death.

"I know you don’t just get rid of problems by talking about them, but I’ve learned that over time maybe you can better understand them and make them more manageable," he wrote.

Love also wrote, "Mental health isn’t just an athlete thing. What you do for a living doesn’t have to define who you are. This is an everyone thing. No matter what our circumstances, we’re all carrying around things that hurt — and they can hurt us if we keep them buried inside."

If you or a loved one is struggling with mental illness, you can find help at namigreatercleveland.org.