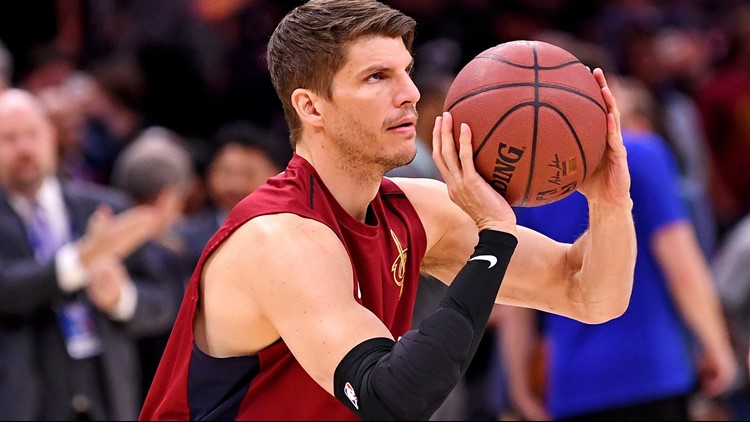 INDEPENDENCE, Ohio -- Over the course of his first 15 years in the NBA, Kyle Korver has been considered a consummate professional.

But after the Cleveland Cavaliers were swept by the Golden State Warriors in the 2018 NBA Finals, the sharp-shooting swingman didn't feel he lived up to that label.

"I didn't talk to anybody after the last game," Korver said, referencing the Cavs' season-ending Game 4 loss to the Warriors. "I kind of just walked out. It wasn't very professional of me and I apologize to all you guys who were there. I would have liked to have said "thank you" and I should have done that. I was just really -- I was done."

It'd be tough to blame him.

On the court, Korver struggled with inconsistent playing time, particularly in a postseason in which he was shifted in and out of the starting lineup, playing as few as few as four minutes and as many as 38. For the second straight season, the former All-Star saw his team's season ended at the hands of the Warriors, who present an obvious set of challenges for a 3-point focused shooter such as himself.

Off the court, was even worse. In March, Korver's 27-year-old brother, Kirk, unexpectedly passed away from a brief illness.

The family tragedy caused Korver to miss seven games down the final stretch of the regular season. It also played a part in him examining his future in basketball following the Finals, with the 37-year-old revealing on Monday that he considered retirement before ultimately opting to return for a 16th season.

"I took a good chunk of time and kind of got away from the game and really evaluated a lot of things and really tried to decide if I still had the desire to play," Korver said at Cavs media day. "I talked things through with my wife and my family and look at my kids. I can't quite talk it through with them yet but just try to get a feel for where they're at in life. After doing all that, I felt like I wanted to come back and still wanted to play. I still love the game. I'm excited to be back."

When it came to his future on the hardwood, it was clear that family was the biggest -- if not the only -- factor.

"Really, I needed to have the blessing of my wife and family," Korver said. "The older I get, there's a 'family cost.' to continuing to play. That's a real thing. Once I felt like my family was in a spot where that even though we went through what we went through, we're good."

With that, Korver is coming back for the sixteenth season of an already impressive career -- although it's unlikely this season will end in the Finals like the last two.

With LeBron James now in Los Angeles, the Cavs are hardly considered title contenders. And with an influx of young talent, Korver will be relied upon just as much as for his leadership as he is for his 3-point shooting.

Given his reputation in not only Cleveland, but across the league, it's something he's more than qualified for.