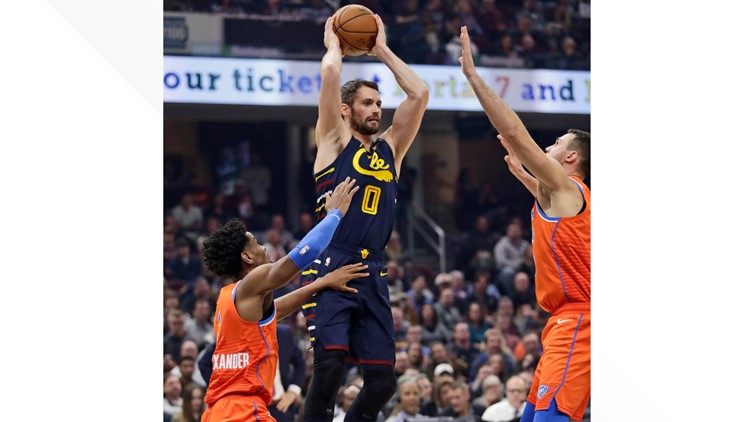 Kevin Love, who scored 12, yelled at Cavaliers general manager Koby Altman in front of teammates earlier in the day over a recent fine, according to a report by The Athletic.

During Saturday's game, Love appeared visibly annoyed with second-year guard Collin Sexton when the 21-year-old would not pass him the ball during a play in the second quarter. When Love finally did receive the ball, he fired a low, hard pass to Cedi Osman.

"We were making a play call," Love told reporters after the game, via the Associated Press. "We were in the bonus and Chris Paul was on me, so I felt swing it to me and try to throw it in the post, see if they double team and get a good shot out of that. That’s not what we did, and yeah, I was frustrated."

Head coach John Beilein took responsibility for the play call but also criticized Love's actions, saying the team cannot show frustration like that out on the court.

"If I do it, if anyone does it, it really doesn’t make you a better player or a better coach at that time," Beilein said. "It’s like carrying a suitcase around with you, that you have extra baggage. We don’t need to do that. ... So as it’s pointed out to me or I see it, we try to address it the best we can."

Following the loss, Love took to Instagram and posted photos of himself with Sexton and Osman. He added the caption, "A lot of non truths being shared...but I’ve learned that we live in a world where people remember accusations and not rebuttals. Let them paint whatever picture they want. Fact is — I love my teammates. 💪🏻💪🏻💪🏻"

The Athletic's report, citing anonymous sources, also claimed Love was hoping to be traded out of Cleveland. While the five-time All-Star has not publicly asked to be dealt, the Cavs are reportedly talking to potential suitors for his services.

CAVS DECADE IN REVIEW: Where they've been and where they're heading