McLeod, 67, died suddenly on Monday evening, ahead of what would have been his 14th consecutive season as Cavaliers television play-by-play announcer. 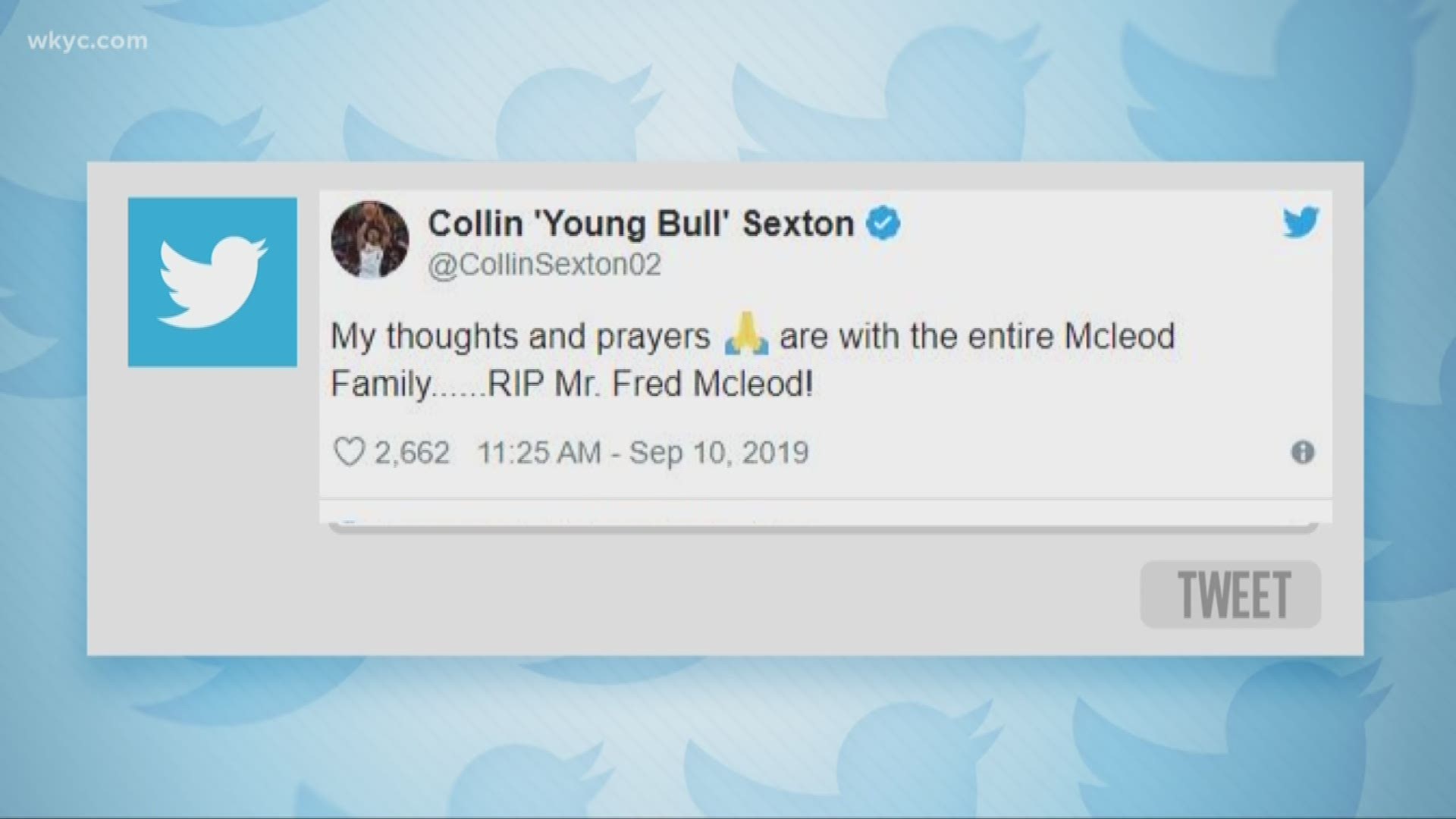 CLEVELAND — The Cleveland, Cavaliers and sports community including LeBron James shared their condolences on social media on Tuesday after learning of the passing of Cavs and Fox Sports Ohio play-by-play announcer Fred McLeod.

The Cavaliers announced that McLeod, 67, died suddenly on Monday evening, after decades broadcasting professional sports coverage, including the last 14 years at home in Cleveland.

Immediately after the news of his passing, those close to McLeod and the community he built covering the Cavs began to honor his memory on social media, with heartfelt posts expressing their sadness and sympathy to his family.

Former Cavalier and current Los Angeles Laker James tweeted on Tuesday: "Man WHAT!!!!??? OMG this is extremely sad. @CavsFredMcLeod May you rest in Paradise my friend! @BethHMcLeod my prayers sent up above to you and your family!!  #RIPFred."

Cavaliers center and power forward Kevin Love wrote: "Shocked and saddened to hear about the loss of Fred McLeod. He was a student of the game. He loved the CAVS but even more so the fans...Fred worked his a-- off for the city of Cleveland and the NBA. Praying and sending my best to his wife Beth and kids."

Collin Sexton wrote on Tuesday: "My thoughts and prayers are with the entire McLeod Family... RIP Mr. Fred McLeod!"

Recently retired Cavalier Channing Frye tweeted of the sports broadcasting icon: "It was a honor to work with him, his passion for the Cavs was infectious and created a culture of pride for the team and the city of Cleveland. Serious prayers go out to his family."

A legendary moment that seemed to be at the top of everyone's mind was McLeod's calling of the 2016 NBA Finals win against the Golden State Warriors.

As the Cavs clinched the championship, McLeod shouted with excitement that only a Clevelander could understand, "Goodnight, Oakland. It's over! The 52-year drought is over!!"

McLeod's wife, Beth, shared a video of him and Austin Carr calling the win back in 2016, showing McLeod overcome with joy as he called "the game of games in tears."

The effects of McLeod's passing were felt far and wide, both by those who loved watching and listening to him on the air and his colleagues.

"Fred was among the NBA’s most respected play-by-play voices and an incredible ambassador for both the Cleveland Cavaliers and FOX Sports Ohio," the regional sports network told WKYC in a statement on Tuesday.

"His smooth delivery and passion for both NBA Basketball and particularly the Cavaliers, created an unforgettable soundtrack to some of the most iconic moments in Cleveland sports history. Off the air, he was a friend and trusted teammate. He will be greatly missed, and we send our heart-felt sympathies to his wife, Beth, and his entire family."

McLeod's co-worker, Fox Sports Ohio host Cayleigh Griffin tweeted: "I’ve been searching for words all morning, but truly nothing will suffice. Fred embodied Cleveland and Cavaliers basketball more than anyone. I learned so much from him in one season and his legacy will live on forever. [heart emoji] love to Beth, his children, and family."

Editor-in-chief of The Athletic Jason Lloyd wrote: "Devastating news. Fred McLeod, the Cavs’ incredibly popular play by play man, has died, the team announced. Fred was a terrific man, an incredibly hard worker and a model ambassador for the team. He loved his wife Beth, his kids, golf and the Cavs. He will be missed dearly."

A long-time fan mourned the loss of McLeod as a staple of his sports experience, remember when the announcer said, "Kyrie Irving bruising ankles and egos...."

The fan wrote: "Gonna miss Fred McLeod, he was the soundtrack to a good chunk of my favorite memories."

“The entire Cavaliers organization mourns the loss of their great friend and teammate,” a team representative told WKYC in a statement on Tuesday.

“Fred’s deep love for Cleveland and the Cavaliers was clearly evident in everything he did in and around the community and on-air during his more than 1,000 Cavalier game broadcasts. He was a true, heart-felt ambassador for the team, fans and entire greater Cleveland community.

“The Cavaliers extend our deepest condolences to Fred’s entire family, including his wife Beth, mother Marilyn, sister Lynn, and his three children, Sean, Jenna, Molly and each of their families.”

McLeod was a multiple regional Emmy Award winner as part of the Fox Sports Ohio Cavs broadcast crew, along with his beloved game broadcast partner Austin Carr. He was also a proud recipient of the National Academy of Arts and Sciences’ prestigious Silver Circle Award in recognition of lifetime achievement in television.

McLeod was a Point Park University (Pittsburgh) graduate, where he played baseball and pitched in the NAIA College World Series.

McLeod was born and grew up in nearby Strongsville, Ohio. He served as  the Cavaliers television play-by-play announcer on FOX Sports Ohio since the 2006 season.