The Chicago Cubs made their victory visit to the White House Wednesday and a peculiar guest was in the room. 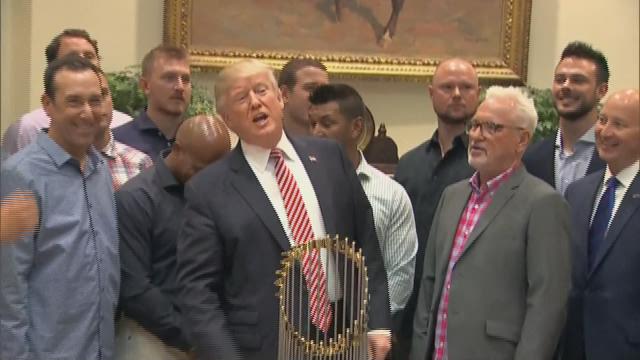 The Chicago Cubs made their victory visit to the White House Wednesday and a peculiar guest was in the room as the cameras were rolling.

In a tweet Wednesday afternoon, Gilbert said he was at the White House "to share DET & CLE progress & challenges."

As the group prepared to tour the Oval Office, Trump called Gilbert over for group photos.

"Dan, do you want to get in this group photo?" Trump asked.

Trump also Gilbert if he's looking for a baseball player to join the Cavaliers.

"I would say, I guess you can't say great season, right?" Trump said of the Cavaliers as Gilbert made his way to the group. "Good season. Last year was a great season."

Trump called Gilbert a "great friend of mine. Big supporter and great guy."

The Cubs beat the Cleveland Indians in the 2016 World Series. The Cavaliers are currently in search of their next general manager as the organization awaits a decision from candidate Chauncey Billups.