Joe Tait, the longtime 'Voice of the Cleveland Cavaliers,' dies at 83

Tait called Cavs games on the radio for most of their first 40 years of existence and also did Indians games during the 1970s and '80s. 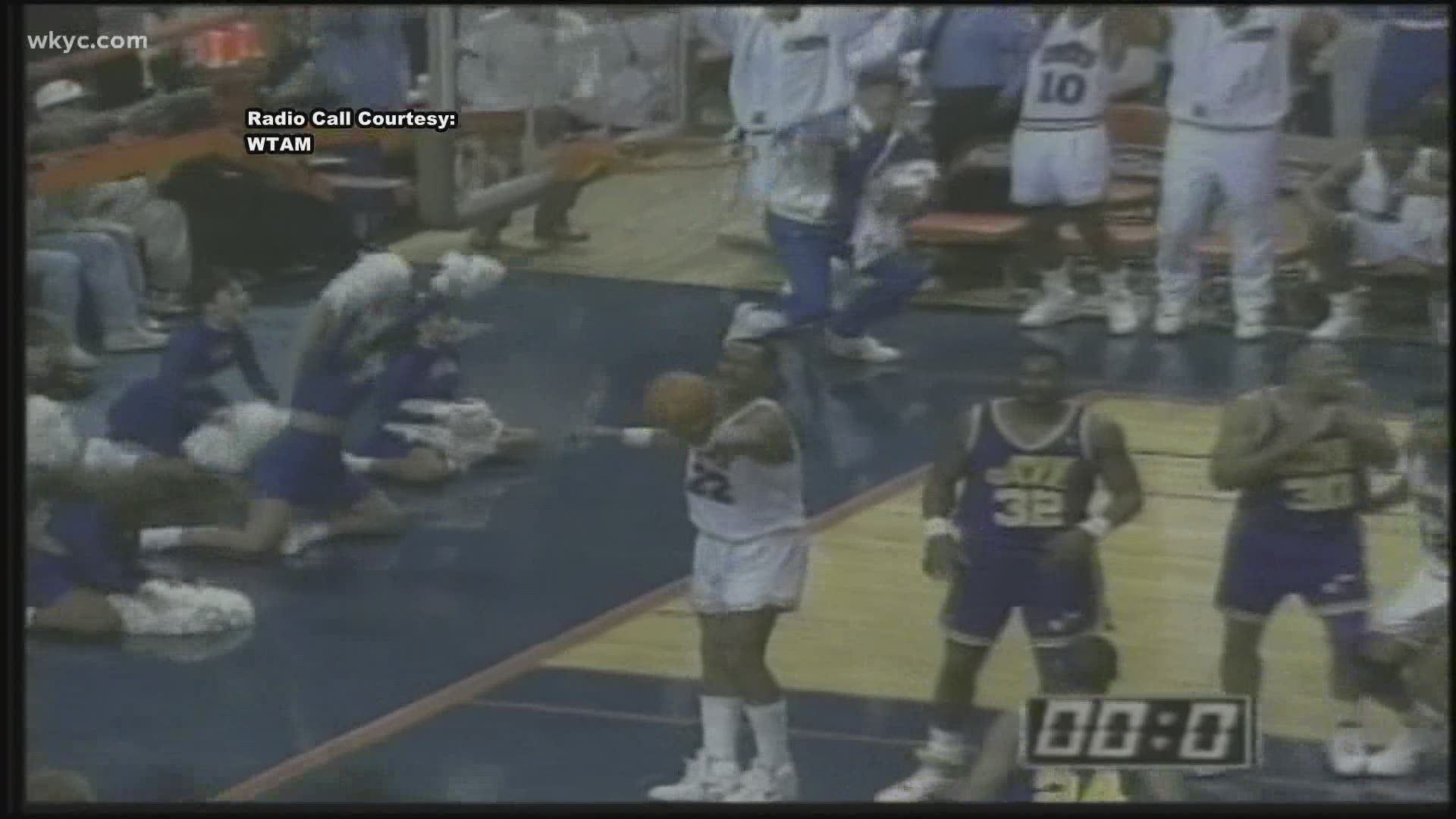 CLEVELAND — Joe Tait, the legendary "Voice of Cleveland Cavaliers basketball" for the bulk of their first four decades of existence, has died at the age of 83.

His daughter Karen confirmed the news on Facebook, saying her father passed away peacefully in his sleep at his home in Lafayette Township Wednesday afternoon. The longtime broadcaster had been battling numerous health problems for years.

The Cavaliers organization released the following statement regarding Tait's death:

"The Cleveland Cavaliers mourn the passing of one of our beloved founding fathers and the original, long-time voice of the franchise – Joe Tait.

"From the team’s inception in 1970 through the next four decades, the Basketball Hall of Famer informed, entertained and inspired generations of Cavs fans – painting a picture of the game with an unmatched mix of passion, precision and humor.

"A dedicated husband and father – generous with his talent and spirit – Joe received every major sports broadcasting award there is over the course of his career in Northeast Ohio. And like some of the most legendary Cavaliers he chronicled, Joe joined them with his own banner hanging in the rafters of Rocket Mortgage FieldHouse.

"A friend and mentor to many over the years, Joe Tait wasn’t just a member of the Cavaliers family; he was a part of the Cavs story like no one else and his voice and unique, candid perspective reverberates throughout the team’s history. He will be dearly missed.

"Joe was also famous for his dry wit and his pragmatic view of life and probably wouldn’t have wanted a big, sentimental sendoff. So, to paraphrase the legend, himself – Let’s not say: 'goodbye.' Let’s just say: 'Have a GOOD night, everybody!'"

The Cleveland Cavaliers mourn the passing of one of our beloved founding fathers and the original, long-time voice of the franchise – Joe Tait.

Born in Illinois, Tait graduated from Monmouth College and got his start in sportscasting calling the Ohio Bobcats and later Indiana University football. While at Monmouth, he befriended the head basketball coach at another small college, and when that coach later got a job in the NBA, Tait wrote to congratulate him and joked that he was available to help, if needed.

That coach was none other than Bill Fitch, the man chosen to lead the expansion Cavaliers in 1970. He asked Tait to audition for the role as the team's radio play-by-play voice, and the organization eventually hired him with their inaugural season already under way. Tait and his then-wife left their home in Terre Haute, Indiana, and Joe would plant his roots in Northeast Ohio for most of the rest of his life.

Those early Cavs teams were dreadful, losing 15 in a row before Tait finally called their first victory. The young broadcaster continued to hone his craft, however, and by 1976 the club itself had finally become a contender. Playing in the glistening-new Richfield Coliseum, Cleveland won its Central Division title to earn their first playoff bid and a date with the defending Eastern Conference champion Washington Bullets.

The Eastern Semifinals between the two teams was a classic, with all but two of the seven games being decided by five points or less. Perhaps the most thrilling finish came in Game 5, when Jim Clemons lit a layup at the buzzer to give the Cavs a 92-91 victory and a 3-2 series lead. On the broadcast, Tait excitedly exclaimed "Cleveland wins!!" for the first signature call of his career.

Five days later, after the Bullets won Game 6 back in D.C., the series returned to Summit County for the decisive Game 7. With the score tied at 85, Dick Snyder put the Cavs ahead for good when he banked it in with four seconds left. Washington could not answer on its ensuing possession, and as the fans stormed the court, an exhausted-but-triumphant Tait celebrated the "Miracle of Richfield" along with them.

An injury to Jim Chones stymied the Cavaliers in the Conference Finals against the Boston Celtics, but the team had won the hearts of fans across the region, and Tait became its beloved storyteller. Other than a brief period calling games for the New Jersey Nets and Chicago Bulls in the early 1980s (thanks, in-part, to disputes with incompetent owner Ted Stepien), Tait's voice provided the soundtrack to era after era of Cleveland basketball, from Daugherty, Price, and Nance to Mike Fratello to LeBron James.

His ability to describe the action to the listener was masterful, punctuated with catchphrases like, "Wham with a right/left hand!" "To the line, to the lane…" and "3 ball… Got it!" He would even warmly welcome us all in with "It's basketball time at the Cleveland Arena/Coliseum/Gund/Q!" and when the action was over graciously send us on our way with "This is Joe Tait. Have a good night everybody!"

But Tait’s local sports exploits were not limited to the Cavs. Team owner Nick Miletti also owned the Indians and WWWE (now WTAM), and brought Tait on in 1973 to begin calling Tribe games with Herb Score on the radio. Baseball in Cleveland was less-than-stellar during that period, but there were some memorable moments, such as when Tait called Frank Robinson’s home run in his first at-bat as Major League Baseball’s first Black manager on Opening Day, 1975. (ironically, Tait would play a small role in Robinson's firing two years later, when his criticism of the manager became front-page news and led to a bitter argument between the two)

Tait moved to the television side in 1980, calling games on WUAB Channel 43 for the next eight years with a cast of partners that included Bruce Drennan, Reggie Rucker, and Jack Corrigan. While fewer games were shown on TV back in those days, Tait just so happened to be on the mic on May 15, 1981, when Len Barker tossed a perfect game to beat the Toronto Blue Jays 3-0. Coincidentally, it was also Tait's 44th birthday.

On Twitter, the Indians posted footage of Tait calling the final out of Barker's gem, along with their own statement thanking him for "the decades of joy you have brough to Cleveland sports fans."

Aside from the pros, Tait also called Mount Union football games for 30 years and even did some high school action for WEOL radio in Lorain County. He was still a staple with the Cavs, though, and in 2008 celebrated his 3,000th game with the team. Two years later, his work was recognized throughout the NBA, when the Basketball Hall of Fame honored him with its prestigious Curt Gowdy Media Award.

But as he got older, Tait's health began to fade. He was hospitalized with pneumonia just prior to the 2010-11 season and later underwent heart surgery, causing him to miss the majority of the year. Many feared Tait's time with the Cavaliers would unceremoniously end, but ever the fighter, he returned to call the team's final five home games and go out on a positive note.

During Tait's penultimate broadcast, the Cavs unveiled a banner featuring his name and a microphone next to the club's retired numbers. Five days later, he left a winner with a 100-93 victory over the Washington Wizards, and said farewell to the fans with a new spin on his patented goodbye: "Have a good life everybody!"

Tait somewhat retreated from the public eye in his retirement, but still made time to watch and listen to the Cavaliers and Indians as well as focusing on passions such as old music and trains. One of his protegees, Tim Alcorn, became the Cavs’ radio voice in 2019, and the two were close friends for years.

Tait is survived by his wife Jean, his three children, and numerous grandchildren. Funeral arrangements have not been announced.

'WHAM WITH THE RIGHT HAND': Catchphrases, highlights, and what you might not have known about late legendary Cavs announcer Joe Tait