Love writes about his long battle with depression and offers some messages of hope for those dealing with mental health issues. 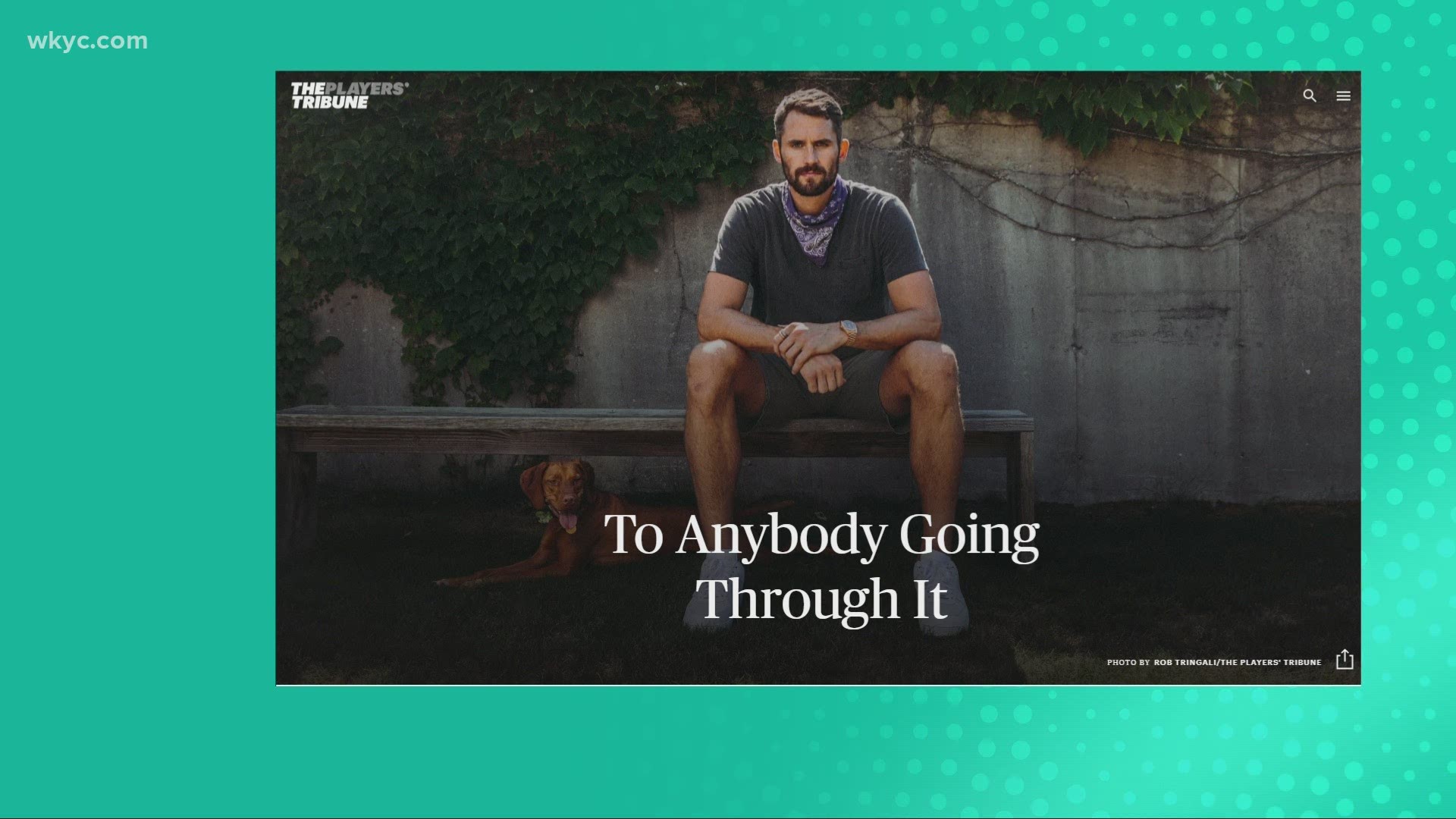 CLEVELAND — In 2018, Cleveland Cavaliers forward Kevin Love wrote a groundbreaking piece in the Players' Tribune titled "Everyone Is Going Through Something," which chronicled his battle with anxiety.

Even though it was a relief to get his story out, two years later, Love says 'some days are just brutal.'

On Thursday, Love published an update about his mental health battle in a new Players' Tribune piece called "To Anybody Going Through It." Love's piece comes as the nation is dealing with an unprecedented pandemic along with a new emphasis on racial justice.

"But what people on the outside don’t always understand is that it takes all of your strength and willpower just to exist. Just to keep on going. Battling depression, battling anxiety, battling any mental health disorder … it’s all just so unbelievably exhausting," Love writes. "That’s been on my mind a lot lately, considering the millions and millions of people around the world who have lost their jobs, or lost their loved ones, or who are just dealing with the unprecedented anxieties of being a human in 2020. I know so many people out there are suffering right now. I’m no different. I’m still going through it. Even after all the work I’ve tried to do on myself over the last two-and-a-half years, some days are just brutal."

What is new in this piece is Love's story about the depression he dealt with for years prior to his anxiety attack in Atlanta in early 2018.

"Five years before the panic attack that everyone knows about, I was probably in the darkest period of my life. I’d only played 18 games with the Timberwolves that season, breaking my right hand twice, and that was when this whole … I guess you’d call it a facade or a character that I had sort of built up …. it all started crumbling. I was in a cast. My identity was gone. My emotional outlet was gone. All I was left with was me and my mind. I was living alone at the time, and my social anxiety was so bad that I never even left my apartment. Actually, I would rarely even leave my bedroom. I would have the shades down most of the day, no lights on, no TV, nothing. It felt like I was on a deserted island by myself, and it was always midnight. Just … dark. Dark and alone with my thoughts. Every. Single. Day," Love added.

The five-time NBA All-Star says there are still some days that he doesn't want to get out of bed.

The piece ends with Love reflecting on the night in Atlanta when he had the anxiety attack during a Cavs-Hawks game. He was asked by the Cavs trainer what he needed.

"What do you need?

For me, I guess what I needed was to talk to somebody.

For me, what I needed was to know that I wasn’t alone.

If you’re struggling right now, I can’t tell you that this is going to be easy.

But I can tell you that it does get better.

And I can tell you that you are definitely not alone."

Since going public with his story two years ago, Love has become one of the leading advocates in the nation on mental health. He created The Kevin Love Fund, which aims to promote emotional and physical well-being, particularly as it relates to mental health. Earlier this yer, Love revealed that he was making adjustments to his organization to also account for traumas caused by inequality and racism.

RELATED: Coming Back To Life: WKYC's Dave "Dino" DeNatale reveals his battle with depression and anxiety