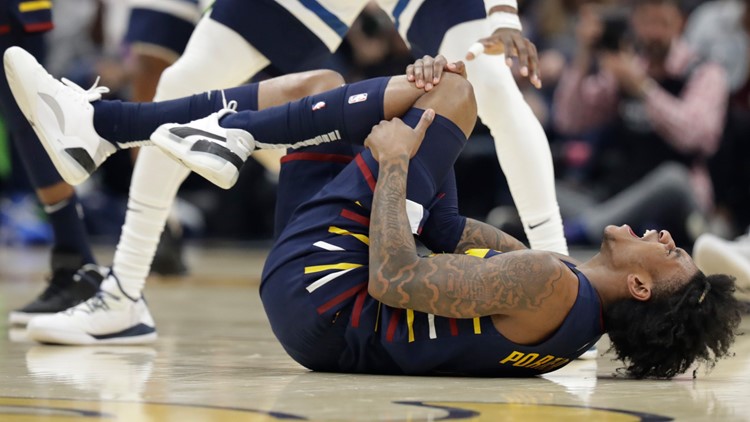 Photo by: Tony Dejak/AP
Cleveland Cavaliers' Kevin Porter Jr. holds his knee after an injury in the second half of an NBA basketball game against the Minnesota Timberwolves, Sunday, Jan. 5, 2020, in Cleveland. Porter left the game due to the injury. Minnesota won 118-103.

CLEVELAND — The Minnesota Timberwolves blew a 25-point lead in the second half before regrouping to beat the Cavaliers 118-103.

Gorgui Dieng scored 22 points and Shabazz Napier 21 for Minnesota, which led 90-65 with four minutes to go in the third quarter. But Dante Exum got hot for the Cavs, who went on a 32-6 run to take the lead. Dieng then made two 3-pointers as Minnesota reeled off 14 straight points to put it away.

Kevin Love sat out for the Cavs, one night after he showed frustration in a loss to the Oklahoma City Thunder. Exum finished with a career-high 28 points.

During the third quarter, Cleveland rookie Kevin Porter Jr. went down with a non-contact knee injury and had to be helped to the team's locker room. The Associated Press reports the 30th overall pick in last year's draft was seen on crutches after the game.

Porter has shown promise in his first season, averaging 8.3 points per game while shooting 48.2% from the field. It is unknown how much time the USC product could miss.

Love's absence was reportedly due to rest and had nothing to do with reports of him being frustrated with the Cavs organization or Saturday's outburst. While The Athletic's Kelsey Russo reports Love will not be disciplined for the matter, head coach the AP says John Beilein would not confirm that after Sunday's game.

One day prior to the matchup, Cuyahoga Heights High School paid tribute to former Timberwolves coach Flip Saunders by renaming its high school gymnasium after him. Saunders was named Ohio's Class A boys basketball player of the year for the Redskins in 1973 and later won 694 games over 17 seasons on NBA benches before dying of cancer in 2015. On Saturday, his son Ryan and all current Minnesota players attended the ceremony.

The Cavs will next host the Detroit Pistons on Tuesday night.

CAVS DECADE IN REVIEW: Where they've been and where they're heading