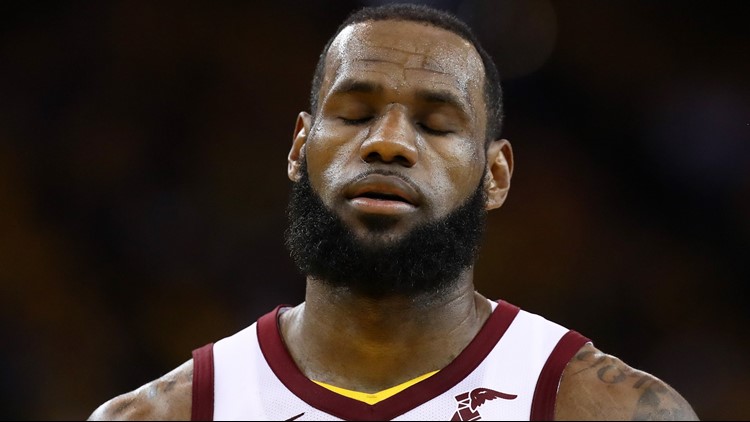 That’s the way it goes against the Golden State Warriors at Oracle Arena.

Facing Golden State in the NBA Finals has been James’ burden the past four seasons, and he has one championship to show for it.

After losing Game 2 and falling behind 2-0 to Golden State in the Finals, James is frustrated but not deflated.

James and the Cavaliers are in a difficult position. The Warriors have the better team. That doesn’t mean they can’t be beat, it just means it’s really tough to beat them.

The opponent needs to be perfect, or close to it, just to have a chance, and the Cavaliers were not that despite James’ efforts on Sunday.

Cleveland needs to be at its best to win games in this series, and the Warriors don’t need to be perfect to win. They weren’t in Game 1 and won, and in Game 2, they were very good. That’s why they’re in control of the series – behind 33 jaw-dropping points from Steph Curry, 26 easy points from Kevin Durant and 20 cool ones from Klay Thompson.

It’s hard to beat Golden State when those three All-Stars score like that, and even more difficult when Cavs players not named LeBron James shot 38.5% from the field.

If the Cavaliers have any shot of getting back into this series in Games 3 and 4 in Cleveland on Wednesday and Friday, they need more help for James and Kevin Love, who had 22 points and 10 rebounds.

And not just offensive help. Defensive help, too, and that’s possible – not guaranteed but possible – in Cleveland where the Cavs and their role players tend to play better. The two games in Oakland were competitive.

The Cavs trailed by five in the third quarter and seven in the fourth. They weren’t out of the game until an onslaught of scoring from Curry and Durant midway through the fourth put the game away.

Despite a 2-0 hole and historical precedence in favor of Golden State, the Cavs aren’t out of this series yet. The Warriors are beatable. Four times in this series? Well, it might be difficult to beat Golden State four of the next five games, and the team with a 2-0 lead ends up winning the series 93% of the time.

“The odds have been against me since I was 5, 6 years old,” James said. “So we're talking about basketball here. It seems like I come up here and tell you guys this all the time. So, I put our team in position to try to win a championship, to compete for a championship.

“It's my job to make sure that we're as focused, laser focused as possible, do my job, and continue to instill confidence into my teammates until the last horn sounds.”

Cleveland has bounced back from a 2-0 series deficit twice in the past three seasons – beating Golden State for the title in 2016 and beating Boston eight days ago in the Eastern Conference finals.

But it starts with Game 3 on Wednesday in Cleveland. James will do what he does, and Love is having a fine offensive series, and George Hill was good in Game 2. A little more offense from J.R. Smith, Jeff Green, Kyle Korver and Larry Nance Jr. will put Cleveland in a better spot for success.

Defensively, Cleveland can’t do much about the crazy threes that Curry takes and makes, and Durant is so difficult to defend. But limiting JaVale McGee and Shaun Livingston and eliminating the easy dunks and layups that occurred with frequency in Game 2 is paramount for the Cavs. Those are the adjustments Cleveland coach Ty Lue and his staff will look to make.

James does a lot, but he can’t do it all by himself. Against another team, what James is doing might be enough. But not against the Warriors.