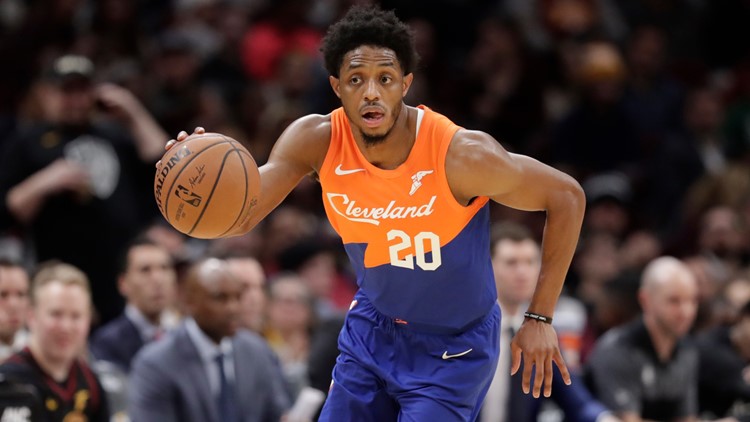 Photo by: AP
Cleveland Cavaliers' Brandon Knight drives against the Brooklyn Nets in the second half of an NBA basketball game, Wednesday, Feb. 13, 2019, in Cleveland. (AP Photo/Tony Dejak)

CLEVELAND — After failing to appear in any of the Cleveland Cavaliers' first four games of the season, Brandon Knight has now played in each of his team's past two contests -- including a 20-minute showing in Sunday's 131-111 loss to the Dallas Mavericks.

It appears there may now be an explanation for Knight's uptick in P.T. beyond Matthew Dellavedova's absence for personal matters.

According to Sean Deveny of Heavy.com and Forbes, NBA teams have begun to take note of Knight as a potential trade target. As such, Cleveland would be wise to showcase the 27-year-old guard, who might not otherwise fit into the Cavs' guard-heavy rotation.

Per Deveny, Cleveland is looking to acquire a first-round pick for Knight and is willing to take on another team's bad contract in order to do so.

“If you can take the hit on his [salary] number and match it, you can get rid of a bad contract and get a guy who can still play,” one league executive told Deveny, formerly of the Sporting News. “He’s got the most interest. He is 28 years old. He’s been through a lot obviously with the injuries, but he is a guy who can probably help you this year and maybe you keep him on a good value deal if he produces.”

Initially selected by the Detroit Pistons with the No. 8 pick in the 2011 NBA Draft, Knight has seen his once-promising career sidetracked by injuries in recent years. After getting off to a strong start with the Phoenix Suns, with whom he signed a 5-year, $70 million contract extension in 2015, the Kentucky product missed the entirety of the 2017-2018 season due to a torn ACL and appeared in just 39 games during the 2018-19 campaign.

The Cavs acquired Knight from the Houston Rockets in a three-way deal at last season's trade deadline. Appearing in 27 games (26 starts) with Cleveland, he averaged 8.5 points and 2.3 assists.

Despite the former 5-star prospect still possessing plenty of upside, playing time in a backcourt that also features Darius Garland, Collin Sexton, Jordan Clarkson and Dellavedova figures to be difficult to come by. And it would make sense for Cleveland to offload Knight -- and his $15.6 million salary -- in a deal similar to the one in which it first acquired him.