Tyronn Lue is stepping away from his coaching duties with the Cleveland Cavaliers to focus on his health. 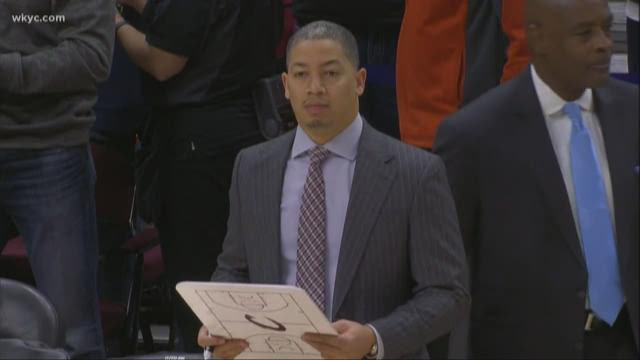 CLEVELAND -- Tyronn Lue is stepping away from his coaching duties with the Cleveland Cavaliers to focus on his health.

The Cavaliers announced the move in a press release Monday morning.

“After many conversations with our doctors and Koby and much thought given to what is best for the team and my health, I need to step back from coaching for the time being and focus on trying to establish a stronger and healthier foundation from which to coach for the rest of the season,” Lue said in the release.

Not the first time Lue suffered through medical issues during a game, he was unable to finish Saturday’s contest against the Chicago Bulls at the United Center in Chicago and Larry Drew took over coaching duties in the second half of the Cavaliers’ 114-109 victory.

READ: LeBron James on Tyronn Lue's leave: 'It's like losing one of your best players'

The win over the Bulls brought to a conclusion a six-game road trip with five outings having been played in the Mountain or Pacific Time zones.

“I have had chest pains and other troubling symptoms, compounded by a loss of sleep, throughout the year,” Lue said. “Despite a battery of tests, there have been no conclusions as to what the exact issue is.

“While I have tried to work through it, the last thing I want is for it to affect the team. I am going to use this time to focus on a prescribed routine and medication, which has previously been difficult to start in the midst of a season. My goal is to come out of it a stronger and healthier version of myself so I can continue to lead this team to the championship we are all working towards.

“I greatly appreciate Dan Gilbert, Koby Altman, our medical team and the organization’s support throughout.”

Over 192 games in two-plus years as head coach of the Cavaliers, Lue posted a 118-74 record (.615 winning percentage). Additionally, Lue compiled a 29-10 record in the postseason with only five losses in the Eastern Conference Playoffs over the last three years.

Lue led the Cavaliers to the 2016 NBA Championship, where they became the first team in league history to erase a 3-1 deficit in The Finals and won twice at Oracle Arena in Oakland, including the winner-take-all Game 7 on June 19, 2016.

Currently, at 40-29, the Cavaliers are in third place in the Eastern Conference and hold a half-game lead over the Indiana Pacers for first place in the Central Division.

“We know how difficult these circumstances are for Coach Lue and we support him totally in this focused approach to addressing his health issues,” general manager Koby Altman said.