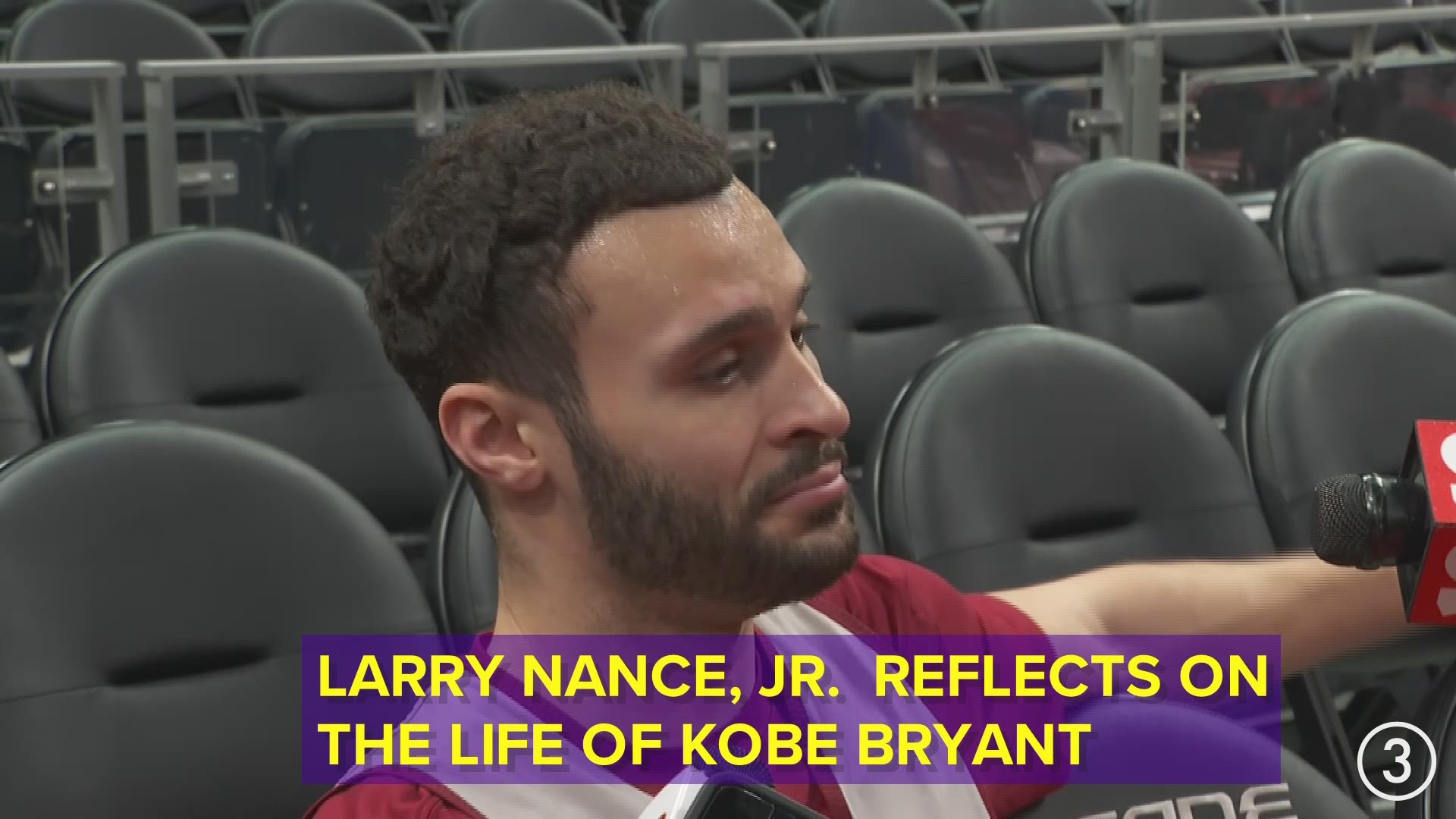 CLEVELAND — Before returning to his hometown and donning his father’s retired number, 22, Cleveland Cavaliers forward Larry Nance Jr. was a highly touted draft pick of the Los Angeles Lakers, where he played alongside NBA legend Kobe Bryant.

During Tuesday night’s game against the New Orleans Pelicans at Rocket Mortgage Fieldhouse in Cleveland, Nance Jr. wore a new number, as he switched from 22 to 24 in honor of Bryant, who along with his daughter, Gianna, and seven others, perished in a helicopter crash in California Sunday.

When Nance Jr. took the court, Cavaliers center Tristan Thompson tapped him on the number on the front of the jersey. Then, Nance Jr. patted his heart twice before settling in to play defense.

More than the numbers, Bryant’s success can be measured by the five championship teams he was a part of and the tireless work ethic and competitiveness, both on and off the court that led him to leave the game as the No. 3 scorer in league history, only to be surpassed by former Cavaliers great LeBron James just hours before his passing.

Although there were many memorable moments, Nance Jr. will always remember sharing the court for Bryant’s final NBA game. Much to the delight of the home fans, Bryant dropped 60 points on the Utah Jazz at Staples Center on April 13, 2016.

“Being on the court for that and being able to share moments with him before and after that game, even during, those are just things I’ll never forget,” Nance Jr. said. “The pictures and the videos that we have, even got a signed jersey that’s framed and is in the dead center of my basement.”

Bryant was a competitor anytime he stepped onto a basketball court, no matter if it was for practice in training camp or the deciding game to clinch an NBA Championship.

Bryant’s relentless pursuit of perfection and his homage letter to the game of basketball as he entered retirement inspired a generation in what has become known as “The Mamba Mentality,” which was discussed at length in the hours following his untimely passing.

Bryant entered the professional ranks straight out of Lower Merion High School in the Philadelphia suburb of Ardmore, Pennsylvania in 1996.

Originally selected by the Charlotte Hornets and traded to the Lakers in the summer before his rookie season, Bryant was the first guard taken in the first round of the NBA Draft straight out of high school, and that proved to be a great decision for the Lakers.

“Just grit, stick-to-it-iveness, toughness,” Nance Jr. said. “Obviously, everyone doesn’t have the same level of skill or talent, but to maximize and optimize the potential that you have and squeeze everything that you can out of this game that we all mutually love is just so important.

“Mamba Mentality, I wish more people got to see it up close and see it in person.”