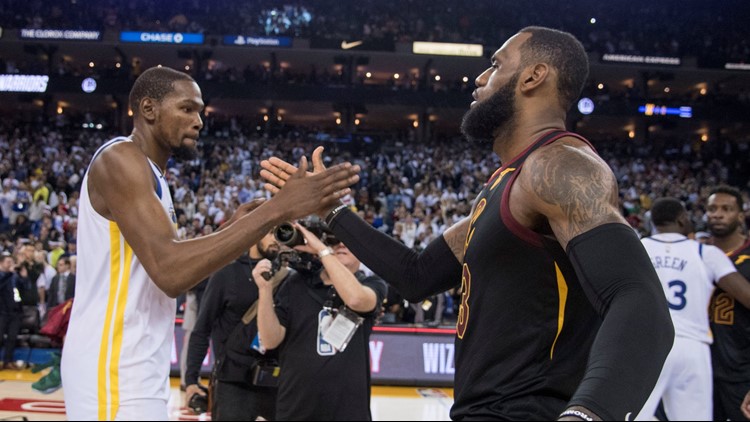 On Wednesday, ESPN reported LeBron James is "hesitant" to sign with the Los Angeles Lakers without another star player joining the team first.

And according to Stephen A. Smith, the 4-time MVP is setting his sights high.

On Thursday morning's episode of First Take, the ESPN host claimed to have received not one, but two phone calls from sources who claimed to have knowledge regarding James' free agency approach. Per the source, James called Golden State Warriors superstar Kevin Durant to gauge his interest in joining him in Los Angeles, which has enough cap space to sign two max contracts this summer.

Before you dismiss Smith's report, it's worth noting that he was one of the first to float the idea of James joining Dwyane Wade and Chris Bosh in Miami before the Cleveland Cavaliers superstar did so eight years ago.

According to @stephenasmith, LeBron James has reached out to Kevin Durant about joining him in Los Angeles. (via @FirstTake) pic.twitter.com/9d77xEdbsI

Fear not, however, Cavs fans, as according to Smith, Durant -- who has reportedly opted out of his contract to become a free agent -- appears to have little interest in leaving Golden State after winning two NBA titles with the team he signed with two summers ago.

"I don't know what Kevin Durant's response to [James] was. That's not the information that I got. But I will tell you what I did hear is that behind the scenes, Kevin Durant was like, 'Why would I do that? You know what, as far as I'm concerned, LeBron James is a big-time player, but the way I look at it, I should be perceived as the best in the world. I'm the reigning two-time champion. I'm the reigning two-time Finals MVP. Why would I think about doing something like that?'

"But nevertheless, LeBron has been making calls."

Golden State Warriors forward Kevin Durant celebrates after throwing down a dunk against the Cleveland Cavaliers in the first half of Game 4 of the 2018 NBA Finals at Quicken Loans Arena in Cleveland Friday night.
Ken Blaze

If Smith's report is to be believed, James has likely also contacted free agent forward Paul George, as well as disgruntled San Antonio Spurs star Kawhi Leonard. But when it comes to his alleged recruiting of his current rival, James' efforts appear to have fallen short.