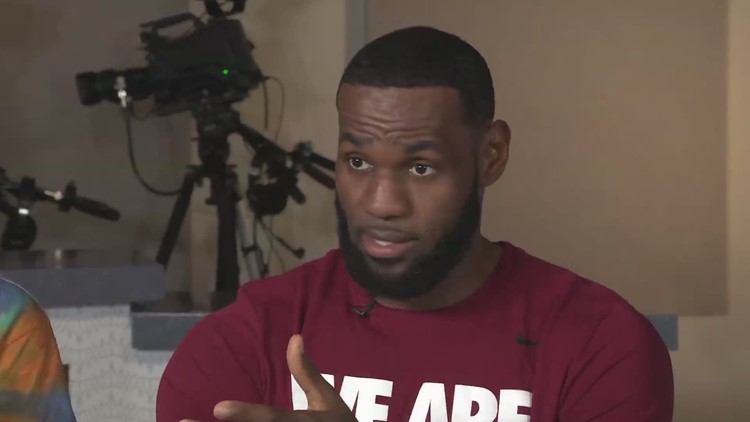 Watch | What LeBron James eats for lunch, according to nutrition expert

CLEVELAND — If you’ve ever wondered what fuels LeBron James, we got the details straight from the source during a conversation with Ladder Chief Nutrition Officer Adam Bornstein.

The former Cleveland Cavalier loves being his best, tacos, and sticking to a routine, so it makes perfect sense that he’s often snacking on a healthy version of his favorite food for his afternoon meal, Bornstein told 3News’ Stephanie Haney on Thursday.

“The beauty of LeBron is he understands what he need to do to get to his next level,” Bornstein, who is a New York Times best-selling author and former editor of Men’s Health magazine, told Haney, while noting that James is consistent with maintaining good habits. He added: "Great habits depend on rituals.”

For James, one of those rituals includes a delicious taco dish, that comes complete with protein, carbohydrates and healthy fats.

“Tacos aren’t just for Tuesdays with LeBron,” Bornstein said. “He loves these Mahi Mahi tacos that he has on an almond flour tortilla, and he does a salsa that’s a combination of corn, beans, and cilantro, and then he has a side of slaw.”

When asked whether James changes things up in the off season, Bornstein said that to James, there is no off season, but shared that James does indulge when he wants to.

“There’s a little bit more wine and I think you see that on social media,” Bornstein said. “The idea is balance. In order to be healthy you don’t have to perfect all the time, you just have to be consistent, and hit those objectives, [including] moving, exercising, recovering, resting and sleep.”

Ladder, which is James’ and Arnold Schwarzenegger’s company, started as sort of a happy accident, according to Bornstein.

“If you really go back to the 2014 NBA Finals, LeBron cramps up,” he said. “If you know anything about LeBron, not doing his best is just a level below what he wants to do. For him that was a moment where it was like, ‘You know what, this is an opportunity, where people would see it as a down, but this is an opportunity to level up.’”

That was when James tasked his trainer Mike Mancias with upgrading everything, from fitness and nutrition, to supplementation, Bornstein said.

“At that point, LeBron had never taken any supplements before, and the big issue with the supplement industry is that it’s very hard to trust. So rather than just trust something that isn’t trustworthy he decided to solve the problem himself and create Ladder. That’s where I came in,” he said.

“He’s friends with Arnold Schwarzenegger, he’s known Arnold for a long period of time, and I was brought in to help formulate these products, that would solve all of the issues that you see with nutritional supplements.”

The team at Ladder think of the organization as a support system to help people better their best.

The idea behind the name comes from the nothing that rungs on a ladder representing the different pillars needed to be our most healthy.

Those pillars include information from experts, access to people like James, safe and healthy products that make a difference in your performance.

Speaking about Ladder’s products, Bornstein said: “You want them to be safe, first and foremost. If LeBron is taking this product, it has to be safe for him to use every single day. It’s gotta be healthy and it’s gotta deliver results.”

The company focuses on the basics, including proteins powder, greens powder to give you all the vitamins and minerals you need from natural foods, and an energy product so that you can fight fatigue and push your body a little bit harder than you can on its own.

For more information about what Ladder offers, visit their website here.

RELATED: WATCH | Smucker's announces $1 million donation to LeBron James Family Foundation during 3News' 'It's About You'