'21 Strong: Callie Brownson's history-making year as a trailblazer for women in the NFL

Brownson's message to girls? 'If you want to play football, I've got your back.' 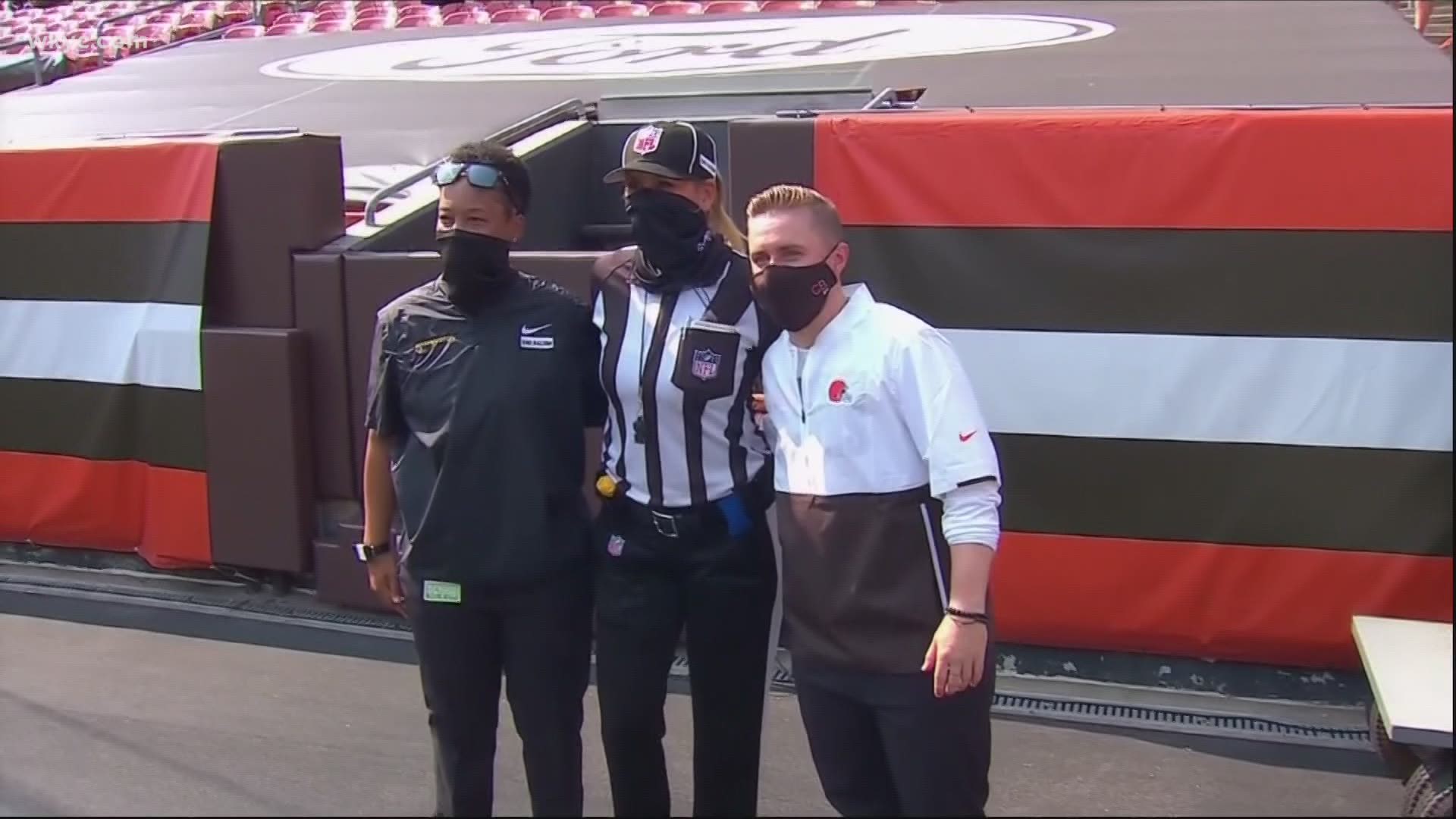 CLEVELAND — Not many people are brave enough to take a job billed as "anything and everything," with a bit of "unpredictable" thrown in, too.

However, they aren’t Callie Brownson. In 2020, she saw an opportunity as Cleveland Browns' Chief of Staff as a dream come true.

"If I am a pioneer, if I am the first to do something, I just want to make sure I do the best possible job so that I’m not the last to do it," Brownson said when we talked to her via Zoom just a few days before Super Bowl LV.  She would have loved to have been there with the Browns, but still found excitement, knowing that two of the NFL's eight female coaches would be there, along with the first woman to officiate a Super Bowl.

Not so long ago, the Virginia native Brownson didn’t know it was possible, that women could coach in the NFL and have the full support of the league. She attended the very first Women’s Careers in Football Forum back in 2017, and saw that there were indeed possibilities.

"What we’ve been able to accomplish in the past 3-5 years with women in football and on the sidelines is incredible," she said, "and we’ve got to keep it up."

Credit: AP
FILE - This is an August 2020 photo of Callie Brownson of the Cleveland Browns NFL football team. Brownson will handle game-day duties with Cleveland's tight ends on Sunday, Nov. 29, 2020, in Jacksonville, Fla., a first for a female in team history. Brownson, who was hired by Browns coach Kevin Stefanski shortly after he came to Cleveland this year, will fill in for coach Drew Petzing. He did not travel to Florida for the game after his wife, Louisa, gave birth to the couple’s first child on Saturday. (AP Photo, File)

In 2020 Callie Brownson helped set the standard. She was part of a team that didn’t just get by, but thrived in a year of virtual offseason programming, strange new protocols that included contact tracing, and inevitably, COVID knocking out players and coaches from some of the games.

"We were doing things in a way that had never been done in the NFL before and overcoming those things every day," she explained. "The attitude of everybody to just make the best of the situation is what translates into what we were able to see on the field during the season. We are a resilient, adaptive team, and that's because we started 2020 that way. and we finished 2020 that way."

Of the historic renaissance season for the Browns, Brownson could only describe it as "incredible," especially when it came to adapting to the curveballs thrown at them.

"We never wanted to find ourselves in a situation where we had to tap into our contingency plan, but one thing we did really well all season was continuing to refresh that contingency plan," she said. "We knew early on that there was always this possibility we could lose a coach, we could lose a player throughout the season in some capacity because of COVID. You obviously don’t want that, but you have to plan for it and we did."

In November, as the team prepared to play Jacksonville, that "anything and everything" job description came to fruition. Head coach Kevin Stefanski informed Brownson she would handle game day duties of tight ends coach Drew Petzing, whose wife had given birth to their first child the day before the game. The move made Brownson the first woman to serve as a position coach in an NFL regular season game.

"I went up to the tight ends that day of practice and said, 'Hey, I got you this weekend,' and [they were] like, 'Cool, business as usual'...  As a woman in football, if you would have told me that was the interaction I would have had with NFL tight ends, getting that news a few years ago, I wouldn’t have believed you."

Brownson’s focus isn’t just on the NFL these days; it’s also on paying it forward at the youth level. She serves on the Football Development Model Council, whose goal is to make the game safer and open pathways to all who want to play.

"[It's about] getting in front of young girls and saying, 'If you want to play football, I've got your back. I’m going to work every day to make sure that you have a place to do that,'" Brownson stressed.

She’s also quick to point out the lessons are not just for girls who love the game, but boys, too.

"To also see that it’s normal and that’s promoted and then it’s backed up by some of these NFL players that they are fans of," she said.

And that’s just the beginning: Women's names are now coming up in general manager inquiries. What about the first female head coach? Brownson doesn’t see a firm timeline, but says at this point, it’s not a matter of "if," but "when."

"I’m excited for that day that you can turn on prime time football and there’s a female head coach running the show and a great unit behind her to do so," she predicted. "Yes, we will get there."

It is happening. Women have been knocking on the door of men’s professional sports for years now. This year, thanks to leaders like Callie Brownson, Jennifer King, and Maral Javadifar, to name a few, that door has swung wide open. That’s where she waits for others to follow.

"I just want to make sure if that elevator takes me up, I’m sending it back down to pick somebody else up and come join me."

RELATED: Breakthroughs come on, off field in 2020 for women's sports