3News' Jay Crawford is frustrated over the Browns' loss; Watch as he and Dave 'Dino' DeNatale break down the game on #3Browns: 'The 5th Quarter'

The Cleveland Browns dropped to 3-2 on the season after a 47-42 loss to the Los Angeles Chargers at SoFi Stadium Sunday. 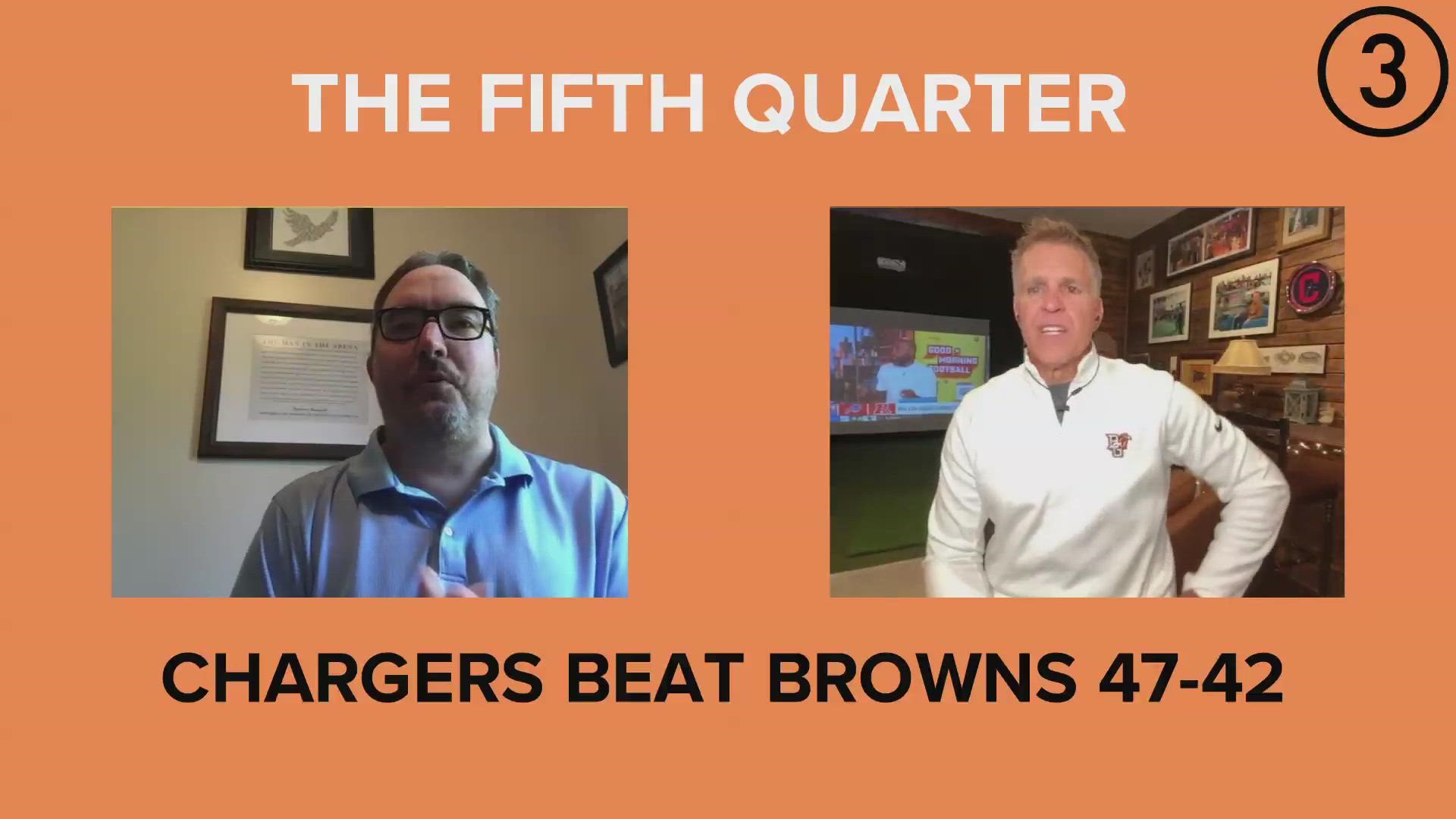 CLEVELAND — After two weeks of sputtering, the Browns offense looked back in high gear on Sunday in Los Angeles. Unfortunately, Cleveland's defense couldn't overcome Justin Herbert and the Chargers attack as the Browns fell 47-42 to drop to 3-2 on the season.

Welcome to "The 5th Quarter," your Monday recap of the Cleveland Browns hosted by Jay Crawford and Dave 'Dino' DeNatale.

Normally, Jay and Dino break down the game in the following show segments: Opening Drive, Touchdowns, Turnovers, Notables, and 2-Minute Drill. But this particular loss brought up a bunch of questions about who was to blame, so we devoted our time to looking at each suspect:

THE REFEREES: There's no question that officiating was one of the key subplots of Sunday's game. Midway through the fourth quarter, a fourth-down pass interference flag was thrown on corner A.J. Green even though video showed his jersey being grabbed by LA's Mike Williams. That sequence led to a Chargers score. The referees also missed what appeared to be a holding by L.A. on Myles Garrett later in the 4th, as well as defensive pass interference on the game's final play as the Browns attempted a Hail Mary.

THE DEFENSE: The Browns had zero answers for Justin Herbert, who repeatedly moved the Chargers up and down the field. He also hit Mike Williams for two wide-open touchdown passes on clear defensive breakdowns in the Cleveland secondary. The unit was missing several key players, including Denzel Ward, but you can't have two blown assignments in one game like that.

BAKER MAYFIELD: Mayfield responded after perhaps his worst game as a pro with a strong showing against the Chargers, completing 23 of 32 passes for 305 yards and two touchdowns. However, he and the Browns offense were unable to put the game away, nor were they able to execute a game-winning drive at the end. Mayfield has come up on the short end against fellow young quarterbacks Lamar Jackson, Patrick Mahomes, and now Herbert. That's leading to some Monday rumblings about Baker's ability to win 'the big game.'

PLAY CALLING: With 3:08 to play, the Browns had the ball and a one-point lead over the Chargers. They needed just a couple of first downs and they would come out with a victory. On first down, Kareem Hunt was stopped after a short gain. Then on second down, Mayfield couldn't connect with Rashard Higgins, stopping the clock on an incomplete pass. Hunt was given the ball on a draw on third down and got three yards. Punt. Ballgame.

Jay talked more about this sequence in his Monday column. Read here.

The simple truth is that all of these factors played a role in the loss. It wasn't just one thing. The Browns as a team lost in Los Angeles. Was the officiating helpful? No. Was it the sole reason why the Browns lost? Of course not.

The Browns as a team have to play better. They've got an undefeated Cardinals team coming to town on Sunday. Let's hope it won't be followed by another lineup of suspects on Monday.

You can watch 'The 5th Quarter' in the player below: