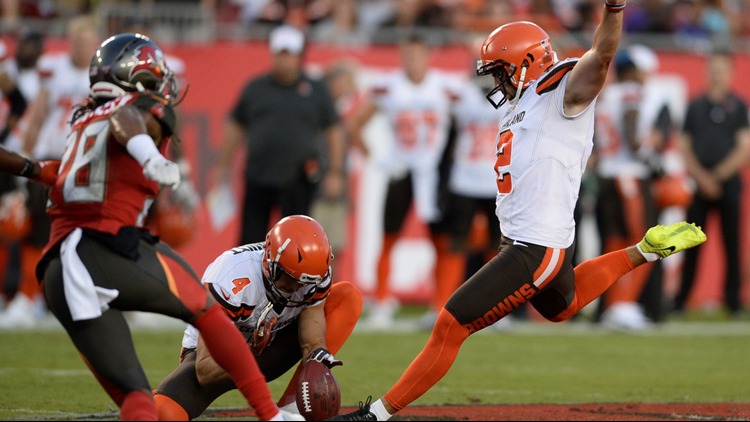 CLEVELAND — The Cleveland Browns’ kicking situation has been called into question many times throughout the last month as rookie Austin Seibert and second-year incumbent Greg Joseph struggled with consistency in training camp practices and the first two weeks of the preseason.

But Seibert took a step in the right direction when he converted all four of his field goal attempts, including the first one from 54 yards out, in a 13-12 loss to the Tampa Bay Buccaneers at Raymond James Stadium in Tampa, Florida Friday night.

“It was pretty good, huh?” Browns coach Freddie Kitchens said. “I like that. I like it a lot. That’s what he’s supposed to do, though.

After the offense stalled in Buccaneers territory on its first drive of the game, the Browns called on Seibert, and he buried a 54-yard attempt to give the Browns a 3-0 lead with 8:49 to play in the first quarter of the third preseason game.

Seibert’s kick was right down the middle of the field, and had several yards left in it, by accounts of the field reporters.

Seibert added field goals of 36, 30 and 35 yards away over the final three quarters.

“Anytime you go four for four…and that first one was a long one, it was a great kick,” quarterback Baker Mayfield said. “That’s just great insurance for us, but obviously, offensively, we need touchdowns instead of field goals.”

By going four for four, Seibert showed the kind of consistency he had at the University of Oklahoma, which led the Browns to select him in the fifth round of the 2019 NFL Draft back in April.

Seibert is the all-time leading scorer in both Oklahoma and Big 12 Conference history and ranks first among kickers in the Football Bowl Subdivision (FBS) in career points, passing the old mark set by former Browns kicker Zane Gonzalez while he was at Arizona State (2013-2016). Additionally, Seibert had the most career extra points attempted (315) and made (310) among all kickers in FBS history.

“Now, it was good to see the kicker,” Kitchens said. “I’d like to tell you we meant to do that so the kicker could kick the ball, but hell, we didn’t. I’d rather see him kick extra points.”