The Cleveland defense came up big despite being without Myles Garrett. 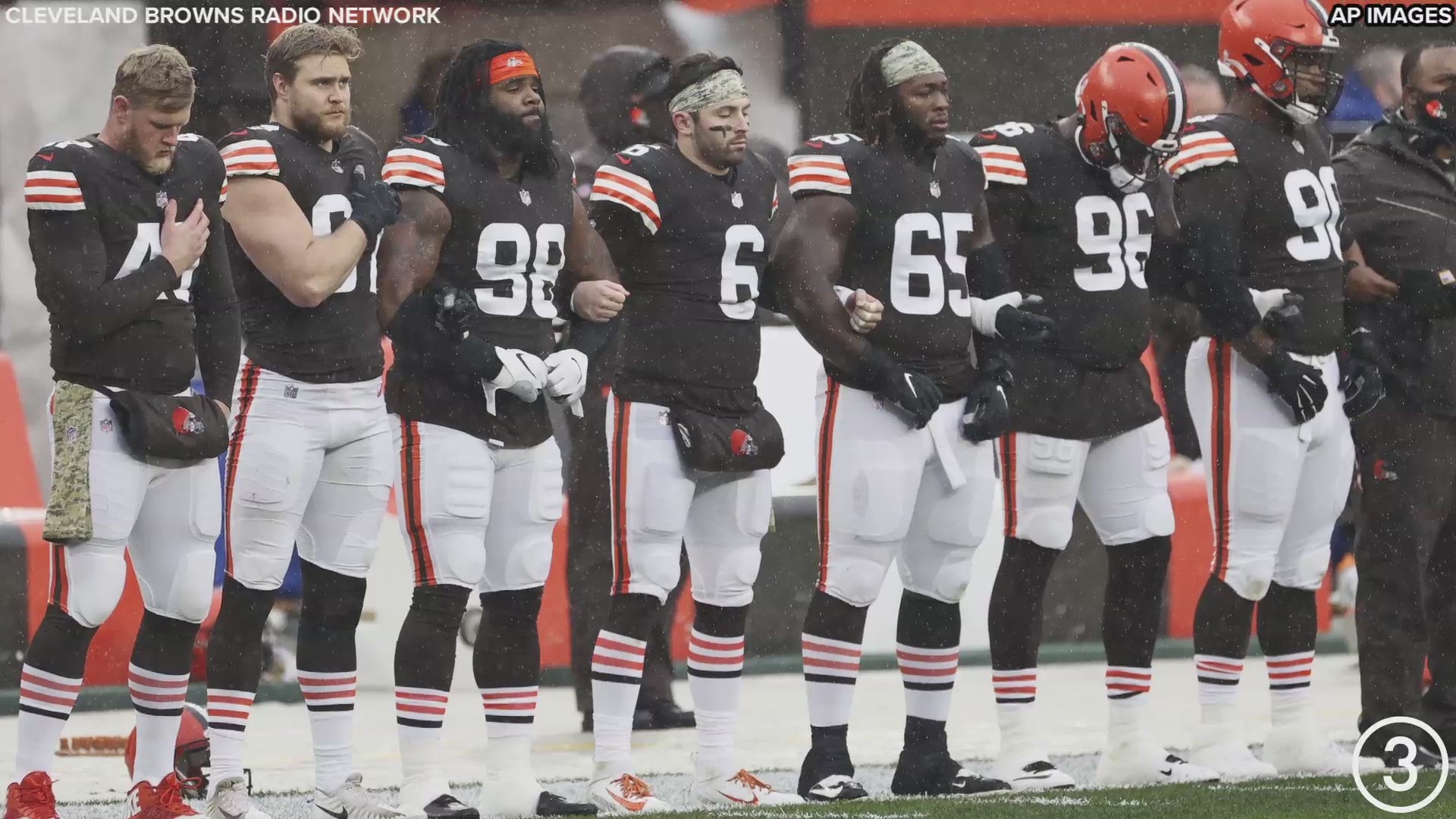 CLEVELAND — The Browns certainly haven't turned in pristine performances as of late, but all that matters at the end of the day is the final score.

In another rain-soaked game at FirstEnergy Stadium, the Browns held off the Philadelphia Eagles 22-17. At 7-3, Cleveland remains right in the thick of the AFC playoff race.

Despite star defensive end Myles Garrett being out after apparently testing positive for COVID-19, the Browns defense came up big, with Sione Takitaki and Denzel Ward each intercepting Philly quarterback Carson Wentz and the former taking his pick back for a touchdown. Olivier Vernon also sacked Wentz three times, including once in the QB's own end zone for a safety.

The normally-potent Cleveland running game got off to a slow start, but delivered when it mattered as the game got close. Overall, Nick Chubb rushed for 114 yards and Kareem Hunt hurdled a defender for a score.

What follows is a drive-by-drive live blog of today's game, with the most recent plays and updates closest to the top. Stay tune for analysis throughout the day on 3News and WKYC.com:

0:29: Harrison Bryant recovers the onside kick, and the Browns will kneel on the ball and run out the clock.

0:30: Carson Wentz keeps the Eagles alive by finding Dallas Goedert for a 4-yard touchdown. Philly trails only 22-17, but must recover the ensuing onside kick to have a chance.

1:39: The Browns go three-and-out as the Eagles burn their remaining timeouts. Philly takes over at the Cleveland 47, needing two quick touchdowns to win.

2:01: Denzel Ward is called for a controversial pass interference call, so what does he do on the very next play? Pick off Carson Wentz, of course. The Browns take over at their own 3, looking to run out the clock.

8:21: Another three-and-out for the Eagles, with Carson Wentz throwing three straight incompletions. The Browns will start on their own 47-yard line after a Philly punt.

9:13: The Browns' rushing attack finally wakes up: Nick Chubb breaks off an electrifying 54-yard run, and Kareem Hunt finishes the job by hurdling a defender for a 5-yard touchdown. Cleveland now leads 19-10.

11:24: After a Mack Wilson interception in the end zone is overturned upon further review, Jake Elliot makes a 43-yard field goal. The Eagles draw to within 12-10.

13:54: The Browns fail to get more points after Cody Parkey's 47-yard field goal attempt is blocked by Derek Barnett. The Eagles take over at their own 37.

3:11: Olivier Vernon comes up big again, sacking Carson Wentz in his own end zone. The safety gives the Browns a 12-7 lead.

.@oliviervernon54 sacks Wentz in the end zone for the SAFETY 🙏

4:37: The Browns' running game continues to struggle as Kareem Hunt is thrown back for a big loss. However, Jamie Gillan's punt pins the Eagles at their own 2-yard line.

7:55: Another three-and-out for the Eagles, who manage to only gain a yard. Cameron Johnston's punt goes for just 35 yards, and the Browns will start with good field position at their own 42.

8:59: Baker Mayfield hits KhaDarel Hodge for a big gain to set up a clutch 46-yard field goal from Cody Parkey. The Browns retake the lead, 10-7.

11:59: Disaster for the Browns as Fletcher Cox knocks the ball out of Baker Mayfield's hands. Alex Singleton pounces on it at the Cleveland 19, where the Eagles will look to tie the game.

12:44: Olivier Vernon gets his second sack of the day, coming up huge with Myles Garrett down with COVID-19. Cameron Johnston's punt puts the Browns at their own 28.

Some injury news: Eagles center Jason Kelce is questionable to return with an elbow injury, while Browns safety Ronnie Harrison will not return due to a knee issue.

0:00: The Browns fail to do anything with the stop, and we head into halftime.

0:30: Adrian Clayborn, filling in for Myles Garrett, sacks Carson Wentz for a huge loss to help force an Eagles punt. Donovan Peoples-Jones returns the kick to the Browns' 20.

0:58: The Browns go three-and-out again, thanks in part to a Jason Sweat sack of Baker Mayfield. The Eagles will start on their own 38 after a 10-yard punt return by Greg Ward.

2:32: The Eagles again drive into Browns territory, but Carson Wentz is eventually stuffed by Malcolm Smith on a read option play. Cameron Johnston punts it into the end zone, and Cleveland takes over at its own 20.

More bad news for the Eagles: All-Pro center and Cleveland Heights native Jason Kelce is headed to the locker room after suffering an injury.

6:53: The Browns drive near mid-field, but the drive stalls after a pair of Baker Mayfield incompletions. Jamie Gillan punts to the Eagles' 20-yard line, where Philly will start.

9:47: A personal foul penalty by Andrew Sendejo gets the Eagles into Browns territory, but Carson Wentz is sacked on 3rd down by Olivier Vernon. Philadelphia punts, and Cleveland starts on its own 11.

13:35: The Browns' defense comes up huge, as Denzel Ward gets to Eagles quarterback Carson Wentz and forces a fluttering throw that's picked off and taken back for a touchdown by Sione Takitaki. Cleveland takes a 7-0 lead.

PICK SIX❗️@DenzelWard applies the pressure and @STakitaki takes it to the house! 🏡

1:08: Baker Mayfield completes a few crisp passes, but misses a wide-open Austin Hooper on 3rd-and-goal. On 4th down, Kareem Hunt's touchdown is overturned, and the Eagles will take over inside the 1-yard line.

7:56: The Eagles drive down into the red zone, but Miles Sanders coughs up the ball. Karl Joseph recovers for the Browns, who will start the drive at their own 4-yard line.

Karl Joseph recovers the fumble and it's our ball!

13:50: The Browns go three-and-out as Baker Mayfield struggles to throw in the rain. Jamie Gillan punts, and the Eagles will start at their own 31.

With the Browns playing Philly today @God_Son80 wanted to pay tribute to one of the greatest who ever did it in the City of Brotherly Love, the Answer @alleniverson. pic.twitter.com/GGprOy4oaV